Beyond The Multiplex: Men Play For Different Sorts Of High Stakes In ‘Mississippi Grind’ And ‘Finders Keepers’ 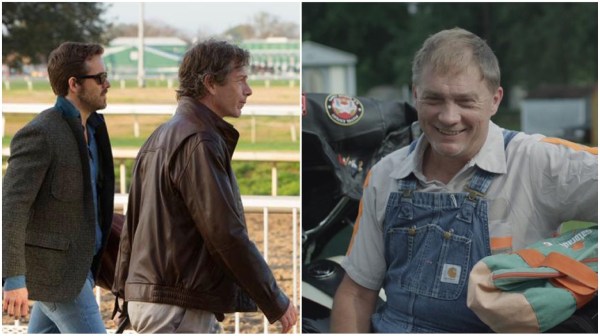 “This story doesn’t have a happy ending,” Curtis (Ryan Reynolds) tells his partner Gerry (Ben Mendelsohn) late in their trip from Dubuque, Iowa to New Orleans, a journey designed to hit every casino and home game along the way and one that forms the spine of Mississippi Grind (A24). It’s slated to end at a high-stakes tournament hosted by a legendary gambler, but it looks like the partners might not make it. It was always a longshot they’d even make it this far.

Both men are gamblers, but they’re different sorts of gamblers. A real-estate agent, at least nominally, Gerry’s deep in debt to, in his words, everyone, and everyone’s looking to get paid back. He has an early-film meeting with a bookmaker whom Alfre Woodard plays with a kind voice, but insistent eyes. It’s not clear whether or not the man who sends Gerry pictures of himself threatening Gerry’s cat is in her employment or not, but it doesn’t really matter: His time is clearly about to run out. But that doesn’t stop him. When Gerry hears a story about a degenerate who regrets putting himself on a list that will bar him from all his state’s casinos to satisfy his girlfriend, he immediately thinks of the guy’s solution: “Disguise.”

Curtis, however, plays to play, not to win. Or so he claims. Friendly, gregarious, and free with a drink, he’s the sort of guy who immediately ingratiates himself to everyone in the room. It’s a role that plays to Reynolds’ considerable strengths, allowing him to be talkative and charming while suggesting, to those who look closely enough, that he might be full of sh*t. Gerry drives around listening to a CD that lays out 200 poker tells, but even armed with its knowledge, he never can quite figure Curtis out.

He likes him, though, and Mississippi Grind, the fourth feature from co-writers and co-directors Anna Boden and Ryan Fleck (Half-Nelson, It’s Kind of a Funny Story), quickly turns into a study in the ups and downs of a newly forged friendship. Gerry and Curtis bond over gambling and quickly come to see each other as kindred spirits. Both have nothing to lose, if for completely different reasons. They might as well see where that takes them together.

Mostly, it takes them through the saddest (but moodily shot) back rooms, race tracks, and gaming floors of the Dubuque-to-New Orleans circuit, with a Little Rock side trip to visit Gerry’s ex-wife (Robin Weigert) that mostly confirms how far he’s fallen. (The family pictures remain on display; Gerry’s just been cut out of them.) The film’s content to ramble alongside them without asking too many questions, and better for it. Boden and Fleck hint at what’s turned Curtis into the lost soul he’s become without spelling it out. When he visits his sort-of girlfriend Simone (Sienna Miller), neither can quite remember how many months it’s been since they saw each other. Maybe it doesn’t matter anymore.

Gerry, on the other hand, is a man without any secrets. He gambles. And he loses. And that’s all there is to him. Mendelsohn, in a remarkable performance, plays him as a man who’s been hollowed out by his compulsions, animated only by a need to keep doing what he does until something makes him stop. They’re a study in contrasts that compares favorably to George Segal and Elliott Gould in Robert Altman’s California Split, another tale of gamblers who may or may not be aware of the pit opening up at their feet. The film’s both a showcase for its leads and, after Half Nelson, confirmation that Boden and Fleck are unusually gifted at dramatizing addiction. Mississippi Grind captures the ecstasy of a good role of the dice and the desperation of a bad turn of the cards — and provides a sense of why some keep going even when it becomes clear they’ve lost their shot at a happy ending.

A far more unusual shared passion unites the men at the center of the documentary Finders Keepers (The Orchard). When Shannon Whisnant bought the contents of delinquent storage locker in Maiden, North Carolina in 2007, he was delighted to find it contained a grill, then baffled at what he found when he opened it… an embalmed human foot with most of the calf attached to it. Then the story got strange. Whisnant discovered, after alerting the police, that the foot was once attached to John Wood, a local who’d lost it in a 2004 plane crash. Wood had kept the foot for, his mother claimed, “religious reasons,” but left it behind along with the other contents of the locker. Now he wanted it back.

It’s the sort of “news of the weird” item that fills the Internet on a daily basis, a story to be read and usually forgotten after a disbelieving shake of the head. Finders Keepers directors Bryan Carberry and Clay Tweel, however, decided not to let it go, and their film finds layers beneath layers to the tale of two men and the foot the both united and divided them.

For starters, there’s Whisnant’s reaction to Wood’s attempt to reclaim the foot. Seeing the grisly discovery as a path to fame, he fought for possession of the foot, having already started a modest cottage industry selling tickets to see the grill in which it was found, and selling t-shirts bearing his self-dubbed nickname: “The Foot Man.” And, after all, he did buy it. Then there’s Wood’s reasons for wanting the foot back. Having lost his father in the crash that took his foot, he wanted to preserve it in his memory. He’d even taken steps to preserve it, including stashing it in a Hardee’s freezer and dousing it in embalming fluid of his own invention.

The story has more twists from there, and they’re best not given away. But Finders Keepers sets itself apart as much with its portrait of Wood and Whisnant, which includes digressions into addiction, daytime television, and the lifelong need of both men to please difficult — and, in one case, abusive — fathers. It’s one of the weirdest stories put to film this year, but it’s what makes it familiar that makes it haunting.