‘Run All Night’ Is Not A ‘Taken’ Sequel, And It’s Actually Pretty Damn Good! 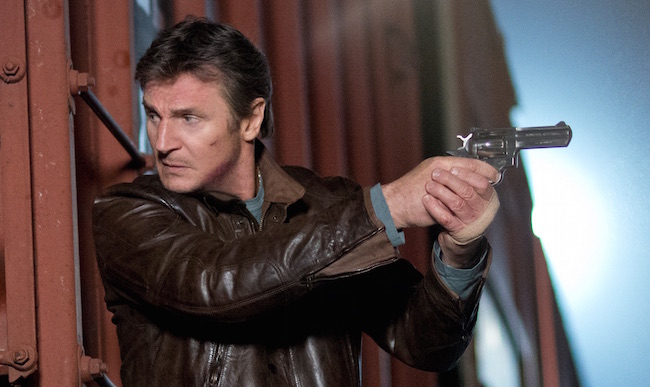 It’s a weird thing when one of the factors about a movie that appeals to you is that it’s simply not terrible. Basically, you just know from the trailer or the commercials or some sort of sixth sense that what you’re about to see is going to be bad. Which isn’t entirely fair, but once that thought creeps into your subconscious, it’s hard to get it out of there. Well, that is, until you start watching said movie and begin thinking, Hey, wait a minute, am I enjoying this? Is this good? I think this might be good. This is weird, I like this movie!.

This is how I felt while watching the new Liam Neeson thriller, Run All Night.

Jaume Collet-Serra’s directorial debut was 2005’s pretty terrible House of Wax, which then was best known as the movie that co-starred Paris Hilton in one of her first major film roles. Hilton promoted this film endlessly, always teasing the fact that she gets killed as some sort of incentive for people to see the film. Collet-Serra would fare better with 2009’s Orphan, which received mixed reviews, but at least had an interesting enough twist ending that kept it in party conversations.

In 2011, Collet-Serra made his first movie with Liam Neeson, Unknown, a movie seemingly about the loss of identity that, in the end, had much more to do with corn than anyone ever expected. 2014’s Non-Stop re-teamed Collet-Serra and Neeson for a movie that received pretty OK reviews and grossed an impressive $222 million at the box office. Now, with Run All Night, it’s safe to say that Jaume Collet-Serra has become Liam Neeson’s go to non-Taken director.

But Taken is Run All Night’s biggest problem, because Taken 3 just came out two months ago and holds an abysmal 10 percent rating on Rotten Tomatoes and grossed about $100 million less than its predecessor. People might not quite be in the mood for what looks like another Taken-style movie so soon. Oh, there there’s no doubt about it, the third Taken film is abysmal… but Run All Night is not Taken 3.

When people ask me about this movie, I usually say, “It’s a better Taken,” but that’s purposefully simplistic. It almost feels like Collet-Serra and Neeson got together this time and decided, “Hey, what if we try to make something a little more ambitious?” Now, I wouldn’t necessarily label Run All Night as ambitious — but, you know, it is kind of ambitious when you consider what this could have been. It still has the Taken style “Liam Neeson on a rampage” action, but there feels like something more this time. There are parts of this movie that really do feel feel like a gritty crime drama involving veteran actors we like — Neeson, Ed Harris, and a surprise cameo I wasn’t expecting — as opposed to the dumb action movie people are expecting.

Neeson plays Jimmy Conlon, an at first seemingly dopey drunk who is relegated to playing Santa Claus so that he can afford to get his boiler fixed. Jimmy is estranged from his son, a hard-working limo driver named Mike (Joel Kinnaman), but the two are reunited after (A) Mike witnesses a mob hit and (B) Jimmy – who we find out is a former hitman himself – defends his own son by killing the son of a mob boss who was going to kill Mike. Of course, now that mob boss (Ed Harris) wants both Jimmy and Mike dead. Complicating things, the police think Mike committed the original murder and that Jimmy shot a police officer in front hundreds of witnesses. (Okay, that last part is true, but it was a dirty cop working for the mob.)

But this isn’t a “Liam Neeson kills everyone in his sight” movie. All he wants is to get his son out of trouble, which, on the surface, is nice. But, more importantly, Neeson is acting during this movie and I suspect that having Kinnaman, Ed Harris, and that cameo by another veteran actor brings out the best in Neeson.

It’s as if Run All Night desperately wants to be something more than the stupid Taken sequel that came out in January. Run All Night isn’t a great movie, but it’s in an honest to goodness good movie that’s kind of trapped with the unfortunate stink of another franchise that it has absolutely nothing to do with.