Some may have thought that Ryan Reynolds cheated by hitting the streets on Halloween as Deadpool, but it’s clear he’s just really into the part, which is practically an extension of his id. It gives him a chance to wash off the stink of the past, even when the kids in the clip decide to bring it up (looking at you Mystique). He’s clearly having a lot of fun promoting Deadpool and it’s cheating I can support.

If this is the kind of promotion we can expect for Deadpool until its release, I’m excited. It’s gold, especially when Reynolds is cursing at children, asking them if they’ve ever killed someone and trashing Green Lantern. The other bonus of doing a stunt like this likely involves quite a haul for the kids. A haul of full-size candy bars and high quality, fancy candy. Not the crap from the dollar store.

Between this and the idea that Colossus is actually going to be the mirror-image of his comic book version in this film, fans have to feel that someone at Fox is finally making an X-Men movie that is actually full of the stuff that made the series so popular in the first place. No one is sewing Deadpool’s mouth shut in this one and even if they do, he’s got it covered: 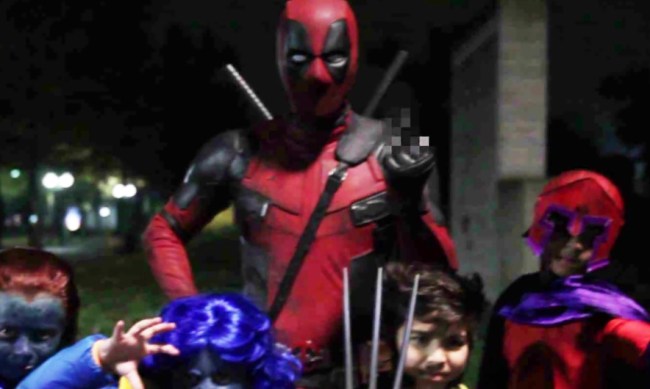 (Via Ryan Reynolds / The Hollywood Reporter)