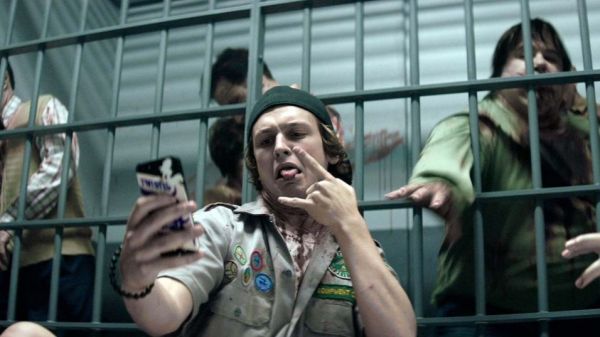 There’s no way to review a movie like Scouts Guide to the Zombie Apocalypse without sounding like an old man yelling at the clouds. It’s neither more nor less than you’d expect from the marketing material: a quick Halloween zombie fix that aspires to Amblin heights but instead falls prey to dick jokes and poor timing. There’s almost nothing in the movie that you couldn’t guess from the title, except that our three Boy Scouts are joined by an impossibly leggy stripper named Denise (Sarah Dumont) in their fight against the zombies taking over their small California town.

Tye Sheridan — quite good in indies like Mud, Entertainment, and Dark Places — plays the thoughtful leader of the pack. He’s tired of being a Boy Scout, but not ready to completely ditch Augie (Joey Morgan), a typical awkward, chubby, and emotionally sensitive teen who’s still reeling from the death of his father a few years ago. Carter (Logan Miller) completes the trio of stereotypes as a horny proto-bro; this condom-carrying virgin shows the least amount of emotional growth or dimension throughout, and for a movie like Scouts, which feels long at 92 minutes, that’s saying something. Dumont rounds out the pack as a tough babe with a gun tattooed behind her ear who takes time out from shooting zombies with a shotgun to give the boys lessons on how to “be a man” and “sack up” and so on. And she isn’t a stripper, boys; she’s a cocktail waitress, she tells them, cocking the shotgun menacingly. Ugh. The trumped-up plot involves Carter and Ben ditching Augie during a campout so they can hit up a senior party and get laaaaaid or whatever, but a zombie outbreak and a jerry-rigged plot turns things from Superbad to worse. Also, their scout leader is a guy with a terrible toupee and a questionable obsession with Dolly Parton; it’s not totally clear if we’re supposed to be laughing with him or at him, although David Koechner does an admirable job with what he’s given.

It’s not so much that Scouts is terrible or made with complete carelessness, or that it’s jaw-droppingly dumb. It’s just that it’s almost instantly forgettable, and everything lingers just a beat or two too long to be funny. How long does Ben really need to hold onto the withered penis of a senior citizen zombie before it breaks off in his hand? How long do we really need to spend at the awful rave with its seizure-inducing strobe lights? How long does it take for Ron the Janitor (Blake Anderson, aka That Guy From Workaholics With The Hair) to set the catastrophic zombie outbreak into motion, and does it really need to involve twerking?

Director Christopher Landon is no stranger to the critic-proof young adult movie market. He wrote the scripts for Blood and Chocolate, Disturbia, and five Paranormal Activity movies; he also directed 2014’s Paranormal Activity: The Marked Ones. He knows his audience well, and that audience is not comprised of anyone who remembers when MTV played music videos. (See above re: old men yelling at clouds.) That crowd also doesn’t expect much more from their horror movies than a quick hit of gore or jump scares and maybe some boobies. It’s not that the discriminating zombie movie fan is oh so refined in his or her enjoyment of rotting corpses eating people — let’s face it, we like to be grossed out and scared too — but usually there’s at least some redeeming quality, whether it’s a subversive political message about consumerism (Dawn of the Dead) or just punk rock fun (The Return of the Living Dead). Scouts offers a few laughs and some nicely gooey practical effects, but there’s really not a lot to recommend it.