Is There Such A Thing As Too Much ‘Star Wars’? 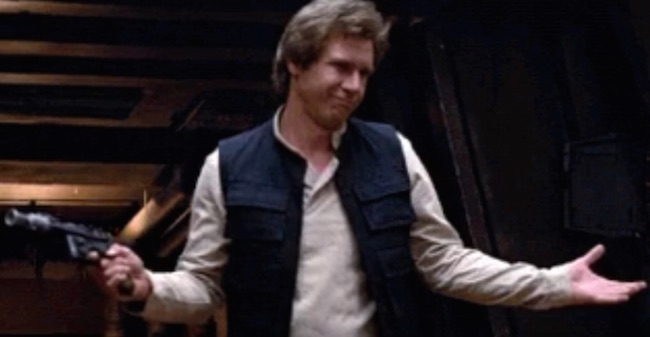 In an issue of Marvel’s new Star Wars comic book that came out last month — which takes place between the events of the original Star Wars and The Empire Strikes Back — it’s revealed that Han Solo has a wife. (Or had a wife, or maybe it’s all a big misunderstanding, we’ll have to wait and see.) In the pages of this comic, we’ve also found out how Vader learned the name of the Rebel pilot who destroyed the Death Star. The new comics, novels and even spin-off movies (starting with 2016’s Rogue One) are now filling in the gaps of the Star Wars story and, according to Disney, it’s all 100 percent canon. We are supposed to treat all of this as true gospel, just as we’d treat the Original Trilogy.

I have mixed feelings about all of this; while we are gaining story, we’re also losing something that made Star Wars great.

I hate bad exposition. If I realize something is exposition as it’s happening, then it’s bad. Any time there’s a line of dialogue at the beginning of a movie that goes something like, “Come on, baby sister,” I cringe, mainly because no one talks like that. No one has to point out that their younger sister is, in fact, their younger sister… especially to their younger sister. It’s also a bit insulting to the audience to assume there’s just no other way anyone would pick up on this relationship, so it becomes, “I guess we’re just going to have to tell these numbskulls.” It’s lazy. Not everything needs to be explained. We still don’t really know what the Kessel Run is from Star Wars, and we are better for it.

Like a lot of people my age, I was exposed to the original Star Wars when I was young. People talk a lot about how the first time they saw Star Wars, they were swept up into this magical world and how it felt all all-encompassing. The hero’s journey of young Luke Skywalker, longing for something more, coupled with the groundbreaking special effects, are usually what’s (deservedly) cited as the reasons for its appeal; the reason we kind of feel like we live in this world, too, while we’re watching. That’s all part of it, but the biggest key, for me, is that people in the world of the original Star Wars movies never explain much. They talk about things the way people in that world would probably actually talk.

In the original Star Wars, Han Solo brags about the Millennium Falcon’s performance, boasting, “It’s the ship that made the Kessel Run in less than 12 parsecs.” Great! What’s that? It’s never explained. Luke Skywalker and Ben Kenobi react to this statement with a look on their face that says, “That is impressive, but you seem like an asshole.” If the original Star Wars came out today, Luke would have responded by explaining the Kessel Run. But this is exactly why Star Wars is so good: It’s mentioned, never explained, and they move on. It doesn’t need to be explained! All we need to know about the Kessel Run is that Han’s spaceship performed well while doing it. But, by being so specific, it also let our imaginations run wild about what this Kessel Run might be. It’s not important, but it does whet the imagination. That’s a great trick for a movie to pull off.

It’s the little off-hand, unexplained references that make Star Wars seem like a real world. Luke does it at the beginning of Star Wars when he mentions that he can take Ben as far as Anchorhead. What’s Anchorhead? It’s never explained. (Okay, yes, there is a deleted scene, hold that thought.) In The Empire Strikes Back, Han Solo reminds Leia of the trouble that they had with a bounty hunter on Ord Mantell. What is Ord Mantell, and who was this bounty hunter and what happened? It’s never explained, and the scene moves on because all we needed to know is that Han is freaked out about the price on his head and is getting the hell out of there. If Empire came out today, that would be an elaborate flashback scene. “Scruffy looking nerf herder,” “pull the ears off a gundark,” the list of never explained references goes on and on and it’s wonderful.

(According to the old Expanded Universe, that bounty hunter was IG-88. Before being completely obliterated by Disney, yes, the old EU books and comic books did address some of these stories. But that always felt more like supplemental materials that weren’t to be taken seriously, as opposed to what’s happening now. I back up this claim by pointing out that the entire EU was wiped out by one Disney publicist drafting a press release. Since this is an event that takes place between Star Wars and Empire, I’m sure the new comic book will now address this story.)

I have a working theory that the original Star Wars movie is a happy accident; that a lot of the things that worked were concessions because George Lucas didn’t have the time or money to pull of his actual vision. In the original The Star Wars draft, Han Solo is a big green alien. For a good portion of filming, Mark Hamill thought his character’s name was Luke Starkiller, which was changed right before Hamill had to deliver the line, “I’m Luke Skywalker, I’m here to rescue you.” Star Wars cares so little about exposition; we don’t even learn Luke’s last name until halfway through the movie. Back to the Anchorhead reference: An elaborate scene was filmed that finds Luke and Biggs and his friends hanging out at Anchorhead and it’s a genuinely terrible scene and deserved to be cut. But, again: happy accidents.

George Lucas has said many times that dialogue doesn’t matter. He gets mocked for this, but maybe he’s right, from a certain point of view. (That’s my one Star Wars pun for this piece.) I think the way so much isn’t explained is a combination of a happy accident and Lucas’ disdain for dialogue. I’m not convinced that Lucas made off-hand, never explained references to the Kessel Run and Ord Mantell to immerse us in the world, I kind of think he just didn’t feel like explaining it because he’s George Lucas, and he doesn’t like dialogue. Happy accidents.

The most blatant piece of true exposition in the first Star Wars is when Ben tells Luke about his father, which turns out to be a lie anyway, so it’s not even really exposition. (Okay, one more happy accident: When this scene was being filmed, it wasn’t a lie. Vader didn’t become Luke’s father until the second draft of Empire, so this is technically true exposition, but retroactively it isn’t.) And in this same conversation, Luke throws out a never explained reference to the Clone Wars. I can’t even begin to tell you how many hours were spent with my elementary school friends discussing what we all thought the Clone Wars were. Well, now we know. I think I liked our versions better. Seriously, not everything needs to be explained.

Again, I have mixed feeling about all of these stories being filled in. These offhand references are what makes Star Wars great. Look, I want to see Rogue One as much as anyone and I think Gareth Edwards is a talented filmmaker who will bring a great story to theaters. And I keep reading the comics, even though SO MUCH keeps happening in every issue. Every little nuanced story reference seems to have a backstory that feels a bit like fan service. (Star Wars comics spoiler alert: I mean, of course it’s Boba Fett that finds out Luke’s name and delivers it to Vader. It had to be Boba Fett because people just love Boba Fett.) But there’s also a little something being lost… the part of Star Wars that only existed on our own heads. This is what made us feel immersed. This is what made this impossible story seem kind of real. The more we learn about every little thing that happened, the less it’s ours.