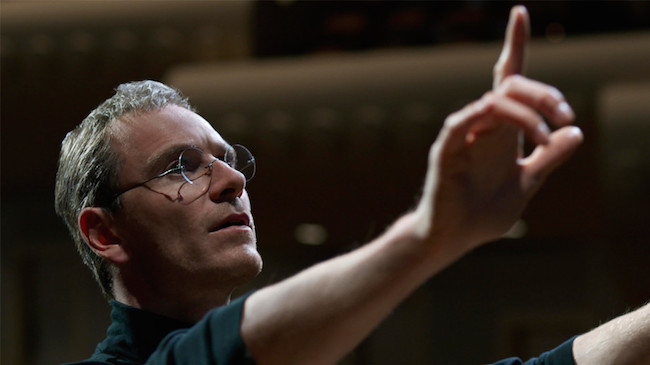 The more I think about Steve Jobs, the more I realize it’s a really oddball movie. As I write this, it’s been more than a week since I saw the film (the New York Film Festival’s centerpiece presentation on Saturday), and I think about it a lot more than I thought I would when it ended. (I will try to explain that confusing sentence.) Steve Jobs is so dense with information compacted into what amounts to three vignettes of Jobs’ life over a 15-year span, it almost tricked me into thinking it’s not a full-on biopic. But all the information of a regular biopic is there, it’s just served concentrated. It’s in the days that follow when we start adding water to what we were given — in an effort to get to what this movie is actually supposed to taste like.

(Analogies! Also, I considered writing down my thoughts immediately after seeing the film, then writing a follow-up a few days later, then writing the rest of this review right now –- as a kind of mirror to the way the film gives us a glimpse of Jobs at three separate times in his life… but then I decided that was stupid. Though, it would have at least showed my appreciation for Steve Jobs growing the further I get away from it.)

Going in, I knew Aaron Sorkin’s script would divide the film up into three key moments of Jobs’ life. What I didn’t realize was just how specific those moments would be: Namely, three moments right before Jobs is to give important presentations for the Macintosh, NeXT computer, and the iMac, respectively. So, yes, in each act, Jobs is preparing for a speech and is surrounded by mostly the same people, but his relationships with each have changed each time.

When we first meet Steve Jobs (Michael Fassbender, who looks more and more like Jobs as the movie goes along, but nails the voice from the very beginning), everything is pretty optimistic! Well, other than the fact that his new Macintosh keeps crashing when it’s suppose to say “Hello,” which causes that infamous dickish side of Jobs to surface as he threatens to verbally undress Andy Hertzfeld (Michael Stuhlbarg) in front of thousands of people unless his new computer says “Hello.” (It’s kind of remarkable how much drama comes out of this otherwise pleasant greeting.)

Oh, also, the mother of his child — a child who, at this point, Jobs refuses to even admit is his biological daughter, despite a test saying the opposite — wants the immensely wealthy Jobs to help them get off of welfare. It’s this relationship between Jobs and his estranged daughter, Lisa (played by three different actresses over the course of the film), that becomes the most compelling aspect of Steve Jobs. It’s the film’s emotional heart while the rest of the characters spout off things about processing speeds and corporate politics. It’s this relationship — a relationship that in the press has always been reported as almost non-existent — that makes Steve Jobs and Steve Jobs human.

Joanna Hoffman is Kate Winslet’s best role since Eternal Sunshine of the Spotless Mind — I realize Winslet won an Oscar for The Reader, but the less we talk about that movie, the better — to the point that I kept forgetting that it’s Winslet. Hoffman, a close work confidant, is the closest thing we see to Jobs having a human friend. She is vital to this movie because she provides an entryway into a story about a man who may as well be part machine. Steve Jobs, as presented in Steve Jobs, is not a “lovable” person. But Hoffman, by proxy, gives him warmth.

The second-closest person Steve Jobs has to a friend is Steve Wozniak (Seth Rogen), whom Jobs treats more like a dysfunctional, but lovable scamp than a true friend. Their relationship is compelling, and in the middle act, Rogen gets a true “I’m going for it!” acting moment. Rogen is kind of perfect for this role because we instinctively like him, which is the opposite of the analytical Jobs we spend the most time with. We want Steve Jobs to listen to Woz, but he never does because Steve Jobs listens to nobody but himself, and sometimes Hoffman.

Somewhere along the line, partially because of The Newsroom (also penned by Sorkin), Jeff Daniels went from playing “nice enough guy in unusual situations” to “asshole who knows what’s right.” We see it in The Martian, and now we see it in Steve Jobs. Maybe in the credits next to John Sculley’s name, it should say “played by Will McAvoy.”

This isn’t a slight on Daniels -– he plays this role effectively! –- but it’s just kind of weird to watch him play such a similar part in two movies in theaters at the same time. It makes perfect sense for Sculley — the former CEO of Apple who fires Jobs, then loses his job when Jobs returns — to be in the first act. But in the second two, it feels very much like “Hey, Steve. Let’s address your demons before you go out on that stage.” Again, it’s all concentrated. Director Danny Boyle and Sorkin take almost everything that’s going on in Jobs’ life at a particular time and make it all come front and center at three particular and very similar moments.

But, again, there’s just so much here and so much delivered, it’s a movie that takes a few days to dilute. And it’s kind of remarkable that this is a Danny Boyle film. And as someone who likes a lot of Boyle’s past work — especially Sunshine and 127 Hours — it doesn’t feel like anything that Boyle has done before. It’s great to watch a director do something this different from his other work so deep into his career. (Of course, filming the first segment in 16mm, the second in 35mm, and the third in digital is going to make anything feel “different,” really, but it goes beyond that. There’s something both sterile and overwhelmingly magnificent about Steve Jobs at the same time.)

And again, this isn’t a traditional biopic, but it’s all there – just presented in a more effective way. It’s basically, “Let’s get all of these people in the same room three different times over 15 years and see what happens.” It almost works as an elaborate stage play.

In a few years, I wouldn’t be surprised if we see the script adapted into Steve Jobs: The Musical with lyrics like, “♪Steve Jobs just yelled at me, oh my gosh/I’d better get ‘Hello’ to come out of that damned Mac In Tosh♪”