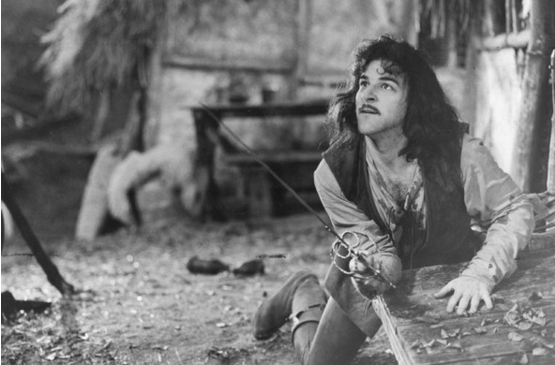 Mandy Patinkin, also known as The Actual Best, is a man who’s not afraid of his own strong emotions, or of sharing them freely and joyfully with the national media. He’s nearly wept with ebullience over a total stranger’s baby on live television. He’s admitted to being almost unpalatably intense and anxiety-ridden in a New York Times profile, then again nearly wept, this time over memories of his father. He told CBS that he “broke down” when reading a season-four script of Homeland. We could all learn something from Mandy about being in touch with our feelings and about crying literally whenever the f*ck.

Mandy’s latest passionate interview (sans tears, though, as far as I can tell) was inspired by the unlikeliest of sources: GOP candidate and human pancake Ted Cruz. In a story in The New York Times yesterday, Mandy explained that in recent days, he’s received several emails from friends alerting him to a troubling Internet trend: Photos of Inigo Montoya — Patinkin’s character in The Princess Bride — overlaid with Cruz’s face. As it would any rational human being, this angered Patinkin. “They Photoshopped his face right over my face!” Patinkin told the Times, probably shaking his fist while pacing his living room, using his other hand to rapidly stroke his beard (he’s on speakerphone in this scenario). “I said, ‘How can I stop this?’ ”

The other pertinent question, of course, is why people are Photoshopping Ted Cruz’s face onto Mandy Patinkin’s body, creating some kind of unholy 2-D demon whose very existence feels like a personal affront and a very real threat to my sanity. Well, as a recent NY Magazine piece explains, The Princess Bride is Ted Cruz’s favorite movie of all-time. Cruz loves Rob Reiner’s 1987 classic so damn much that he’s running around the country, quoting it at campaign events, subsequently tarnishing the beloved film forever. Seriously, if you want to light fire to your entire childhood, just watch this video of Cruz — who, the Times hilariously shares, “dabbled, at times disastrously, in acting at Harvard Law School” — attempting a Billy Crystal impression on a bleak local TV segment.

But one particularly abhorrent Cruz “performance” encouraged Patinkin to go Full Mandy on Cruz in the New York Times. At a recent campaign event at Iowa Central Community College, writes the Times, Cruz went so far as to parrot Patinkin’s Princess Bride catchphrase: “Allo, my name is Inigo Montoya. You killed my father. Prepare to die.” Patinkin, whose inbox soon became nightmarishly “cluttered with videos” of Cruz, told the Times, “I would like to be with Senator Cruz for a moment and I would like to respectfully ask him, since he quotes all the lines from The Princess Bride and certainly all of my character, Inigo Montoya’s, lines, I would like to know why he doesn’t quote my favorite line?” That line, explained Patinkin, occurs “after the princess flies out the window and falls into Andre the Giant’s arms,” when Inigo says to the Man in Black, “I have been in the revenge business so long, now that it’s over, I don’t know what to do with the rest of my life.”

Growing “increasingly vexed” (both hands stroking the beard, the phone now hurled across the room), Patinkin explained why that particular line would be pertinent for Cruz, whose second favorite activity, after working to destroy Mandy Patinkin’s legacy, is “exploiting fears about immigrants and Muslims” — i.e., being in the revenge business. “This man is not putting forth ideas that are at the heart of what that movie is all about. I would love for Senator Cruz, and everyone creating fear mongering and hatred, to consider creating hope, optimism and love,” said Patinkin. “Open your arms to these people, these refugees trying to get into our country, and open your hearts.” And hey, if you want to cry a little, that’s cool, too.