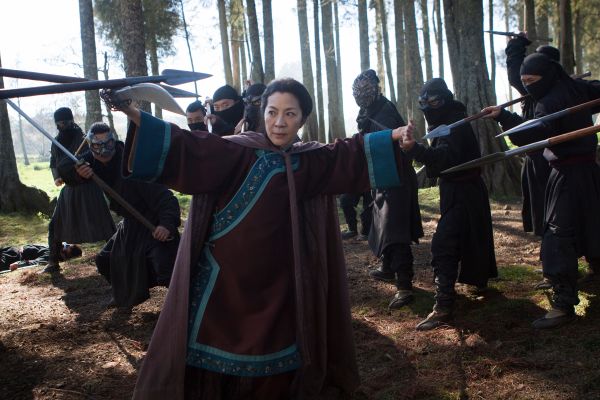 Ang Lee’s elegant 2000 feature Crouching Tiger, Hidden Dragon engendered a lot of renewed enthusiasm for kung fu movies among American audiences. East Asian martial-arts films in the wuxia tradition enjoyed considerable domestic popularity during the ’70s and ’80s, when the Shaw Brothers studio steadily exported low–budget, yet staggeringly entertaining action flicks to neighborhood multiplexes. (Listen to any Wu-Tang Clan track, and you’ll instantly recognize the sort of film I’m referring to.) But Crouching Tiger took a more dignified pose, imbuing the combat with quiet majesty and setting a new standard for kung fu films. Its influence can still be palpably felt to this day, with the Taiwanese standout The Assassin drawing plaudits from those who have had the chance to check it out.

Ang Lee’s influence can also be amply felt in the newly unveiled trailer for Sword of Destiny, the Crouching Tiger sequel (formerly titled The Green Legend) that Netflix has scheduled for a February 26, 2016 release. But therein lies the problem: Watching the clip, it feels more like an imitation of Lee’s style and grace more than a continuation of the same. The plotline appears to be fairly standard-issue, sending the original film’s Yu Shu Lien (Michelle Yeoh, reprising her role) on a quest to protect the fabled Green Destiny sword from an evil warlord played by Rogue One: A Star Wars Story‘s Donnie Yen. The action apes Lee’s weightless hand-to-hand combat, with fighters soaring through the air in blithe defiance of the laws of physics. And yet there’s still something, maybe just the inexplicably selected vocoder cover of “Bad Moon Rising” by the Creedence Clearwater Revival, that makes this feel like an off-brand knockoff of the original film. All of this is puzzling, not to mention the original question of why Netflix would want to revive a wuxia film that enjoyed popularity amongst the arthouse set 15 years ago, but that’s a conversation for another post.