‘The Divergent Series: Insurgent’ Is So Much Better Than The First Movie 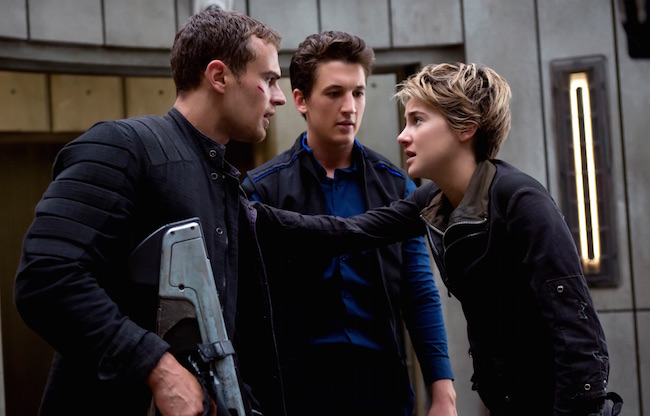 It’s getting hard to feel empathetic for people who live in future dystopian societies. Oh, boo hoo, your peaceful government collapsed and now you’re subjected to an endless series of horrific games, or you have to run through a maze, or you are grouped by how handy you happen to be at some particular task. You know, we all have problems. Maybe this is why something like Star Trek — an almost 50-year-old property — seems so unique: A future where pretty much everything is okay! In today’s landscape of what our fictional futures will look like, it’s edgy to be optimistic.

This is now the inherent problem with a film franchise like The Divergent Series, as we are introduced to these new dystopian futures, it’s getting harder and harder to care. And if we don’t care about the main character’s plight, well, that’s a problem when it comes to being invested in what’s happening in the screen in front of us.

When The Hunger Games premiered, it did gangbusters at the box office – and the reviews were pretty good! – but everyone concedes that its sequel, Catching Fire, is the better of the two movies. Mostly because the whole “here’s a new impoverished world” is out of the way and we can just get to the business of furthering the stories of the characters involved. It’s weird, these “dystopian movie franchises based on YA novels” are now some weird outlier where the second movie is always better than the first.

Not surprisingly, The Divergent Series: Insurgent (that’s a mouthful) is so much better than its predecessor that it almost feels cliché to even point that out. Well, of course it’s better, because this is just how these types of movies go.

Though, I will admit, I had forgotten almost everything that happened in the first Divergent when I sat down to watch Insurgent. When it opens, Tris (Shailene Woodley), Four (Theo James), Caleb (Ansel Elgort), and a fourth person who I’m pretty sure is Miles Teller playing himself are on the run from the authorities.

If you did forget, Tris lives in a world where people are put into factions based on preordained skill sets. Tris is a Divergent, which means she’s good at everything and a lot of people hold that against her – namely Jeanine (Kate Winslet), who seems to be in charge, though everyone just calls her “Jeanine.” As it turns out, Jeanine has a special box that contains a secret message from the founders of their dystopian world, but only a true Divergent can open this box. So, Jeanine needs Tris, even though Jeanine still wants to kill Tris. This would kind of be like if the Tea Party had a special box that contained a special message from Thomas Jefferson, but only the “liberal media” could open the box.

I kind of made fun of Miles Teller for playing himself in Insurgent, but God bless him for doing so. While everyone else is trying to act important or be heroic, Teller is just kind of being a sarcastic jerk … and I love him for being a sarcastic jerk. It’s almost shocking how much personality he has compared to anyone else. All future dystopian movies should cast Miles Teller and when he asks, “So, what do you want out of this scene?,” the director should just say, “Oh, you know, just be yourself.”

There are actually some fairly okay twists and turns during Insurgent that I didn’t see coming. (Though of the two major twists, only one really makes any sense.)

But, hey, the important part here is that I found myself engaged, but not because of the dystopian landscape – the story is still pretty much nonsense – but because the actors have gelled into these characters and they all at least finally seem to have a real purpose, as opposed to the pre-determined purposes that they were all assigned in the first movie. And now we have an actual purpose, because the first movie felt like a preordained assignment, but now at least we’re having a little fun.