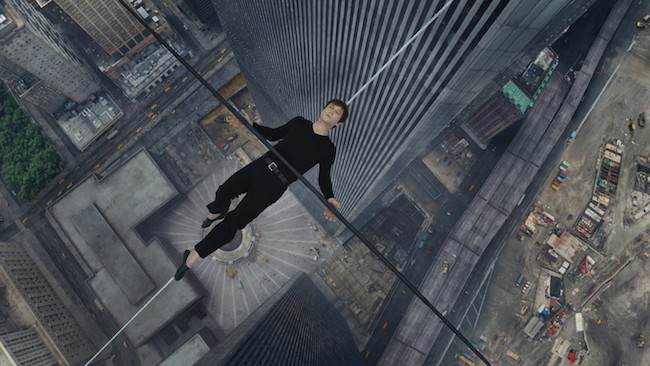 Robert Zemeckis has made two live-action films since 2000’s Cast Away: 2012’s Flight and, now, The Walk, which premiered Saturday night at the New York Film Festival. What’s interesting, looking at these two films together, is that they both center on One Huge Event. In Flight, a fictional commercial airline crash leads to a pretty dazzling trailer featuring a plane flying upside down. With The Walk, it’s the true story of Philippe Petit’s 1974 high-wire walk between the north and south towers of the World Trade Center. (Also: What is Zemeckis’ fascination with falling to our deaths?)

It’s difficult to make a film centered on One Big Event like these two, because both of these events, even in real time, don’t amount to a lot of time. In Flight, the stunning crash leads off the film; the meat of the story is about its aftermath. The Walk is basically an inverse version of Flight, with viewers just waiting to see Petit’s walk between the two towers. That’s the draw; that’s why we’re here: We know there’s going to be a dazzling payoff. The question is: Will we care about the buildup?

Before we get to any of that: This movie was introduced onstage as a love letter to the Twin Towers. And, by design, it’s impossible to watch The Walk without thinking of that horrible day. But maybe it’s been long enough now that, with a movie like this, we can look back on the buildings themselves for the marvel they were — at the time, the tallest buildings in the world. Any time these two buildings pop up in a movie — in an older movie where they just happen to be in the background or a newer movie as a way to let the audience know we are in the past — it’s always a shock to the system. It’s impossible to appreciate those buildings anymore. But the fact they are so front and center in The Walk forces us to remember them, and remember the way the New York City skyline used to look. It’s nice.

The last half of The Walk almost acts as a heist movie, one where we watch Philippe (Joseph Gordon-Levitt) and his team of both French and American conspirators — whose story was previously told in the 2008 documentary Man on Wire — formulate a plan to get to the top of each tower and to somehow get Philippe’s wire across. The Walk, at times, is legitimately thrilling.

By the time we get to the walk between the two buildings, we are invested. Even though we know the ending, the walk itself is thrilling and beautiful. And, yes, with the use of 3D, it feels very high up in the air. When Philippe starts to do a few stunts out there on the wire for the onlookers below and the New York Police Department who, by this time, were on the roof of the building, people in my audience were audibly gasping. I heard one woman behind me yell, “No, Philippe!”

Unfortunately, I never found myself engaged in Philippe’s backstory, which is the first half of the film. We get to watch Philippe work as a mime! Quite a bit, actually. If you like mimes, you may find this interesting. I have nothing against mimes one way or another, but watching a cinematic version of one do the ol’ “person trapped in box” act on a Paris street corner is not really my thing. And we watch Philippe ride around on his unicycle a lot. There’s a lot of unicycle riding. There’s a scene in which Philippe sadly departs his mentor’s home after an argument. Philippe is sad; we, the audience, are supposed to be sad. But as I watched Philippe sulk way on his unicycle, I couldn’t help but smile. Maybe it’s just impossible to feel any kind empathy for a person riding a unicycle. (I suspect this same rule applies to people riding a bicycle built for two.)

Regardless, if you can make it through the first half, a reward awaits. And, for the first time in 14 years, I found myself looking in awe at the Twin Towers and didn’t feel sadness. By the end, The Walk made me feel happy.