Who The Hell Is ‘Mike Pancake’ In ‘Unfinished Business?’ (And 24 Other Urgent Questions) 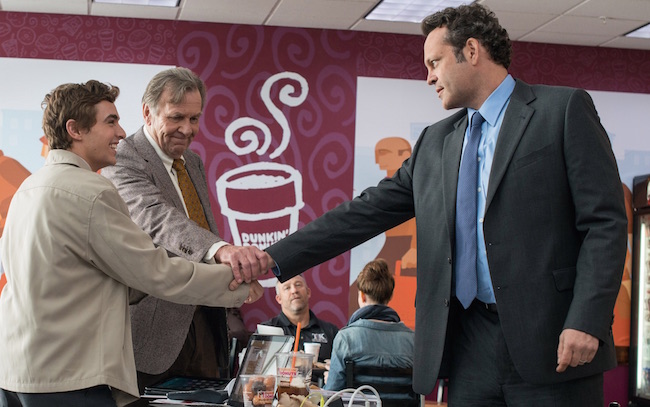 Unfinished Business a new comedy starring Vince Vaughn (Mr. & Mrs. Smith) that will be in in your local movie theater this weekend. In Unfinished Business, Vaughn plays a businessman trying to finalize a big sale. The movie promises laughs! Are there laughs? Here, we will answer every question that you could possibly have about Unfinished Business.

Q: What is the plot of Unfinished Business?

A: Basically, Dan (Vaughn) quits his sales job in frustration, then starts his own fledgling business that, a year later, is still struggling enough that the office meetings take place at Dunkin’ Donuts.

Q: How much money did Dunkin’ Donuts spend to be featured in Unfinished Business?

A: It has to be a lot, because the first third of this movie feels like a Dunkin’ Donuts advertisement.

Q: Does Dan have a crack staff that he hired away from his old job?

A: His staff consists of Tim (Tom Wilkinson), who was let go the same day Dan quit due to a mandatory retirement age rule at work, and Mike Pancake (Dave Franco), who is mentally handicapped.

Q: Wait, so you’re saying that Mike Pancake is just not as skilled of a businessperson as the others, right?

A: No. He is literally mentally handicapped, but we don’t learn that until later in the movie.

Q: Is this as tone deaf as it might sound to many?

Q: Is the name “Mike Pancake” used for laughs at least five times during the course of Unfinished Business?

Q: When did you realize, “This movie might not be for me?”

A: Early in the film, Dan’s daughter accidentally packs Dan’s wife’s running gear for a business trip instead of Dan’s running gear. When Dan sees the wrong clothes, instead of acting like a normal person who would buy a t-shirt and shorts at the gift shop, Dan just wears his wife’s way too tight running clothes, because we’ve all been there, according to this movie.

A: Halfway through the movie, I leaned over to the person sitting next to me and asked, “Does this make any sense?,” and he said, “No.”

Q: How is Unfinished Business so confusing?

A: OK, here we go: Dan thinks he has a big deal in place that will save his company. His team travels from St. Louis to Portland, Maine. When they arrive, Dan’s old boss, Chuck (Sienna Miller) is there, which means there’s competition for what seems like a done deal.

A: What I could never understand is who is in charge of this company that Dan is trying to make this deal with. In Portland, they schmooze a man named Bill (Nick Frost), until another man named Jim (James Marsden) shows up.

A: THEN they are told the real person they need to talk to is in Berlin, so they all fly to Berlin. There, Dan sneaks into a spa to speak to a woman (who is of course naked, because this movie) who is supposedly in charge. They make a deal! Then we never see her again.

A: After that, Dan, Tim and Mike Pancake find Nick Frost’s character at a Berlin gay bar and convince him to make the deal, which he does.

Q: Is this a scene that uses “glory holes” as its comedic device and feels like it belongs in an outdated movie from the ’90s?

Q: Anyway, do they get the deal done?

A: No, because when Dan, Tim and Mike Pancake get to the actual meeting, James Marsden’s character is back in charge, and he reveals Nick Frost’s character is an assistant … and that the REAL boss flew back to St. Louis.

Q: What is this movie?

A: BUT! Dan sneaks into a meeting with the owner of the company, but not the person who went to St. Louis? – I am so confused – and tries to convince that person to accept the deal. Anyway, my point…

Q: Yes, what is your point?

A: That this plot point in Unfinished Business is unnecessarily complicated.

Q: While all of this is happening, is there a subplot about Dan’s son being bullied at school, requiring a series of pep talks over FaceTime?

A: There is, and for the life of me, I have no idea why this is in the movie. Every time Dan speaks to his son, it’s like a scene out of a completely different movie. Not a better movie, just another movie.

Q: Does Vince Vaughn’s character, on the spur of the moment, decide to run a full marathon in a business suit and dress shoes?

Q: Does he finish the whole 26.2-mile race with a reasonable time?

Q: Is there a scene in which Dan, Tim and Mike Pancake crash their car into a reindeer that doesn’t have any impact on the rest of the movie?

Q: How many times did you laugh during Unfinished Business?

A: I laughed once at a sight gag involving FaceTime.

Q: If you’re going to be quoted in this weekend’s commercials for Unfinished Business, what quote do you think will be used?

Q: Where does Unfinished Business rank among all the movies you’ve seen in 2015?

Q: What in the world is the great Tom Wilkinson doing in this movie?

A: I have no idea, other than maybe the now-finished Unfinished Business wing of his estate.

A: Probably those fun stock photos that the cast posed for — now those people look like they are having a nice time.