That FIFA Movie, ‘United Passions,’ Is The Best Unintentional Comedy Of 2015 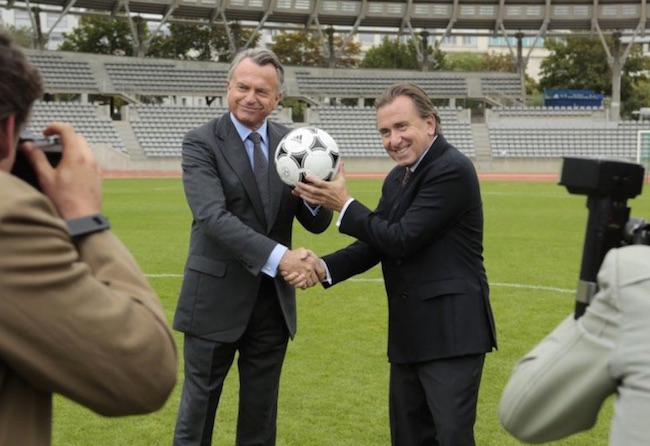 Sepp Blatter is a hero who tried to end the corruption in FIFA and was betrayed in the process.

If you base your entire knowledge of FIFA from the events depicted in United Passions — a film almost entirely funded by FIFA that opens in select cities tomorrow — then that opening sentence up there would be your only reasonable takeaway. This is a movie that ends with Blatter (played by Tim Roth) being reelected to a standing ovation as the music swells. United Passions is the unintentionally funniest movie of 2015.

Look, I’m not going to even try to pretend that before this current scandal I paid attention to FIFA outside of once every four years, or that time John Oliver had a funny segment. I knew people hated FIFA and I knew they were corrupt, but a lot of organizations are corrupt. Of course, now that a number of indictments have been handed down, we now know just how corrupt. Before the FIFA indictments, United Passions would have just been boring, causing an occasional eye roll here and there. Now, it’s hilarious. And making a movie this full of propaganda just makes FIFA look even more corrupt. And it’s a whole movie! With real actors! Tim Roth is in this movie! Gérard Depardieu is in this movie! Sam Neill plays a Brazilian in this movie!

I suspect the conversation around the FIFA offices concerning the prospects of Sam Neill, a British man, playing a Brazilian man probably went something like this:

“Is it insensitive to hire a British actor to play a Brazilian? Maybe we should hire a Brazilian actor?”

“Please just hire the most famous person who will agree to be in this movie.”

Instead of writing more about the narrative of this movie — a movie that begins in 1904 (!!) — I will just list out every time United Passions made me laugh out loud. Scenes that are only there to make FIFA look like heroes caused most of these laughing occurrences.

– A conversation about future FIFA president Jules Rimet (played by Depardieu) goes like this:

The line, “I forbid you from forbidding me from anything,” is spoken, which made me nostalgic for Attack of the Clones.

– A man at a party is hitting on a woman (who I think is supposed to be Rimet’s daughter) and the man is being both racist and sexist at the same time. Jules Rimet, representing FIFA, steps in and calls him “rotten.”

– Fisher Stevens plays Cornelis Hirschman, who resigns as General Secretary for reasons that aren’t really explained. As he resigns, he tells Rimet, “I thought I was doing the right thing, but I wasn’t.” This meeting happens on a scenic Paris bridge right at sunset, as I’m sure it happened in real life.

– There’s a scene set in the late 1930s that is just Rimet yelling at German officials for rearming their country, lecturing them on the atrocities that are sure to follow. No one listens to him. If people had listened to FIFA, World War II could have been avoided.

– It’s made clear that FIFA is no fan of the Nazis.

– The film shifts into the Sepp Blatter era. He’s working for João Havelange (again, played by Sam Neill, somehow) and the line, “May God hear you, Blatter,” is spoken.

– There’s an obligatory scene of Havelange on the phone, explaining that the World Cup is never coming to South Africa until they fix this apartheid mess. So now we can also thank FIFA for ending apartheid.

– In deciding where the 1978 World Cup will be held, Havelange explains that Argentina hasn’t had a lot to be happy about lately, so he’s decided to make them happy by awarding them the World Cup. He then drops confetti on a model of a stadium. (Knowing how FIFA awards World Cups, I thought at the time that this might be the most preposterous scene in the movie. I was wrong.)

– Havelange anoints Blatter his second in command. As he does this, he tells Blatter, “The slightest error on your part, and you’re out.” Blatter responds, “At least things are clear.” I laughed the loudest during this scene.

– There’s an extended montage of cities being awarded World Cups, interlaced with actual soccer highlights, set to the song “Wild Wild Life” by the Talking Heads.

– Blatter is now the president and he calls a meeting with all the FIFA officials and explains there are new ethics protocols and corruption will no longer be accepted. The FIFA officials hate Blatter for this and try to oust him. (This is the funniest scene in the movie.)

– Blatter insinuates that all of FIFA’s problems were Havelange’s fault, then says, “Did he make mistakes? Perhaps. Not for me to judge.”

– Blatter is accused of a lot of wrongdoing, but we are told that obviously a corrupt official on the inside has set Blatter up. Blatter is encouraged to fight these obviously false charges and seek reelection, even seeing out Havelange (still somehow played by Sam Neill) for advice.

– Blatter gives a defiant speech, saying he won’t resign and he will face down the tyrants who dare stand in the way of Blatter cleaning up FIFA. In a dramatic scene, a public vote is held… and Blatter wins! The music swells! The movie ends! He did it!

– There’s a mid-credits scene that is just the weirdest thing. It presents itself as the real footage of South Africa being awarded the World Cup (FIFA got them to fix the apartheid problem), the footage is even kind of grainy. But it’s still Tim Roth as Blatter! What? Just when I thought I was done laughing, I laughed again. Then I read the story that says FIFA informant Chuck Blazer took bribe money over the South African World Cup, then I laughed again.

Again, United Passions is the best unintentional comedy of 2015.