Vin Diesel Now Has 100 Million Facebook Fans. Let’s Think About This For A Second.

Vin Diesel — star of the Fast & Furious movies, returning star of xXx, noted thumbs-up-giver — now has 100 million Facebook fans. That is, from a purely mathematical perspective, a lot of Facebook fans. So many, in fact, that it makes him only the third person in the world to reach the figure, joining Shakira and Portuguese soccer star Cristiano Ronaldo. What a fascinating group that is. I hope Mark Zuckerberg invites all of them over for dinner to celebrate and Vin Diesel spends the whole meal explaining how the third Fast & Furious movie, Tokyo Drift, is actually the sixth in the series, chronologically. I hope they stream it on Facebook Live. I want to see Shakira’s face while it happens.

But perhaps you’re still trying to wrap your head around the “100 million fans” thing. Perfectly understandable. Let me try to help put it all in perspective for you.

– If all of Vin Diesel’s Facebook fans decide to split off and form their own country, they would immediately become the 13th most populous country in the entire world, beating out countries like Egypt, Germany, and France. This country — let’s call it, oh, I don’t know, Dieselbourg — could become an economic and military giant almost overnight. If Vin Diesel installed himself as king, he would be one of the most powerful dictators in the world. Nations would have to consider Vin Diesel’s potential reaction before making major political decisions. There would be headlines in the Wall Street Journal like “Dow Jones Tumbles Amid Fears Vin Diesel Will Back Out Of Trade Agreement.” It would be hilarious.

– If, instead of splitting off to form their own country, all of Vin Diesel’s fans decide at the last minute to write him in for President in the 2016 election (and we’re just going to assume all of them are registered American voters in this hypothetical, because it’s fun), he would win in a legendary landslide. There were about 128 million total votes in the 2012 election. If we assume there will be a similar number this year and Hillary Clinton and Donald Trump split the remainder, he would win 78-11-11. Unsure of how exactly to signify which states he wins on election night, CNN could possibly resort to having Wolf Blitzer manually tape the picture at the top of this post on each state as it is called for Vin, until their entire fancy map is covered with pictures of Vin Diesel looking at us over his sunglasses. Pundits would be flabbergasted. Nate Silver would short circuit. This would also be hilarious.

– If you assume Vin Diesel’s Facebook fans are equally split between genders, and you use the generally accepted worldwide average human heights (5’6 for men, 5’2 for women), Vin Diesel’s Facebook fans would stand just over 100,000 miles tall stacked up on top of each other, which would get them about halfway to the moon. But they’d also all die because the bottom group that is still bound by the laws of gravity would either be crushed under the weight of millions of their fellow Vin Diesel fans or burned to a crisp upon re-entry as the tower underneath them collapses, and the ones that get piled up past the planet’s atmosphere will just float away into the cosmos until they succumb to a lack of oxygen. This would be the greatest worldwide disaster by death toll by a factor of over 20, and 40 million more deaths than there were in the entirety of World War II. So let’s not do this one.

– But if we lay Vin Diesel’s fans down head-to-toe instead of piling them up, and create some sort of flotation system across the oceans to prevent them from drowning (a-ha, lesson learned from the last thing), they would wrap around the world just over four times, which would be super annoying if you were trying to walk somewhere and then all of a sudden, ugh, you have to step over four Vin Diesel fans who are just lying there on the ground like weirdos. I mean, assuming you aren’t one of them. Because if you are, man, that would get boring pretty fast, just staring up at the sky like that. And it would be a logistical nightmare, now that I think about it. The Pacific Ocean alone is 9,600 miles across, on average, which based on our figures means we need to get almost 40 million people out in the ocean on that flotation system. It’ll take thousands and thousands of boats. Who the hell is paying for this? The treasury of Dieselbourg? Vin, think this through! You have schools to fund!

– If Vin decided to bankrupt Dieselbourg and do it anyway, and he does indeed “live his life a quarter mile at a time,” he will have to live his life in 400,000 separate little segments to get from one end of his fans to the other. 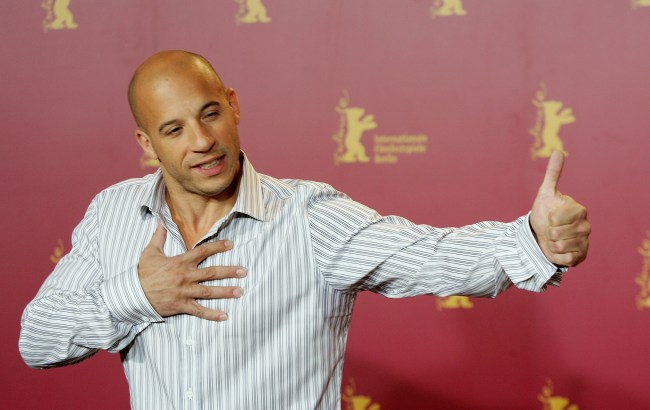 – If all of Vin Diesel’s Facebook fans chipped in $50, they could outbid Verizon $5 billion to $4.8 billion and buy Yahoo!, and then turn the whole thing into the world largest Vin Diesel fan page. Or they could leave everything the same, but install a feature where it asks “Did you mean ‘Vin Diesel’?” at the top of your search results, no matter what you just searched for. So like you could type in “restaurants in Philadelphia,” and it would still spit out all the normal links to help you with your dining quandary, but first it would ask you if you’re sure you didn’t want to search for “Vin Diesel” instead. The stock price would soar like a multimillion-dollar race car between to Abu Dhabi skyscrapers.

– If Vin Diesel shares this post on his Facebook page and all of his fans click on it, it will be my biggest post on this website by a huge, huge amount, and will result in me getting so many congratulatory messages from my coworkers and superiors that it will all go to my head and I’ll become insufferable, constantly changing the subject of conversations to remind people about the time Vin Diesel posted my dumb thing on his Facebook page, like a kid who went to space camp in the summer between 5th and 6th grade and then spends all of 6th grade talking about it. Everyone would hate me so much.

Please do it, Vin.