Better Than Ezra has been making its way across the U.S. as part of the Under the Sun tour, a traveling bill of some of ‘90s’ biggest names, including Sugar Ray, Uncle Kracker, and Eve 6. When I speak to frontman Kevin Griffin, he’s in Seattle between dates and has just enjoyed a nice, albeit stereotypically rainy, day off attending the city’s own Capitol Hill Block Party and seeing Father John Misty, a musician he adores. Next stop is Salt Lake City, where he’ll be flying to later that day, and he sounds excited to settle in back with his Better Than Ezra crew and the rest of the acts.

“Tour’s going really well,” he tells me. “Great turnouts, all the bands get along. There’s BBQs backstage and everything.” I mention that it sounds like an all-summer shindig, made even better by the solid company, and he seems to agree.

“A party for adults is what it is — no other profession would really allow for it,” Griffin admits with a laugh. A veteran in the business, he knows how to keep himself grounded while on the road for long periods of time, saying that he keeps a collapsible bike handy should an adventurous itch lead him to explore what’s beyond the concert grounds.

As we talk more about his fans and the current tour, our conversation steers toward his latest project, one that’s got a lot of people of talking. In late May, he, along with Sugar Ray’s Mark McGrath and Uncle Kracker, released a song called “B.Y.H.B.” — which stands for, of all things, “Bring Your Hot Body.” The internet had a field day with the wild country-pop number; some praised its feel-good vibes, but plenty others panned it, seemingly because it was too feel-good to be… well, actually any good. Much of the hate, however, stemmed from the fact that the song came from these particular guys, as though Griffin, McGrath, and Uncle Kracker were in on some big ‘90s cash-grab/nostalgia train/#ThrowbackEveryday conspiracy. A number of listeners even knocked their collective band name Uncle Ezra Ray, saying it was too simplistic and lacked any creativity. (To be fair, Uproxx had some fun with the concept, too.)

The further we get into this discussion of negative press, the more I sense a chuckle on the way from Griffin, but I feel uncertain whether it’s one of those sighing snickers people use as a defense mechanism, or a sincere laugh at something truly hilarious. It turns out it’s the latter.

Griffin describes the song as “one big send-up, one big, stupid, party song full of fun cliches and silliness.” What’s more, that’s exactly what Uncle Ezra Ray intended this whole time. It’s no surprise, then, that all the uproar surrounding “B.Y.H.B.” has made him and the rest of the band repeatedly bust up in laughter — they can’t believe how upset people are getting. “It invokes strong emotions, some people think it’s serious,” Griffin says in bewilderment. “I haven’t had a reaction like this for a song in a very long time.”

“B.Y.H.B.” has sold well, and those who like it really like it, but the frontman doesn’t necessarily have any hard feelings about the bad reviews. “I’m like ‘Are you kidding me?’ but then I realize that we’re an easy target,” he says, “It’s an easy layup for a writer who wants to diss it.” In fact, he’s actually grateful for any publicity because for every 10 or so people who aren’t into it, two will go ahead and find that they like it just fine.

As many music writers have pointed out, the single has all the hallmarks of a Florida Georgia Line song. Their ears aren’t deceiving them. According to Griffin, the track was originally penned with the band in mind in March 2014. However, by the time he, Rodney Clawson and Jamie Floyd finished writing it, the deadline for submissions for FGL’s latest album had already passed, and so the track was shelved. “It’s staggering how many great songs are written in Nashville that never get heard,” he notes. “Plus, there aren’t many acts that will do a song like FGL… it’s just so over the top, a Southern kind of hyperbole.”

It wasn’t until last November, when Better Than Ezra was asked to join Under the Sun, that Griffin remembered he had “B.H.Y.B.” stashed away and thought to use it as a sort of promotional tool for the tour. He figured he could put together this — as he calls it — “Power Rangers-Super-Super-Machine,” one that would assemble “all of our unique talents into this… monstrosity.” 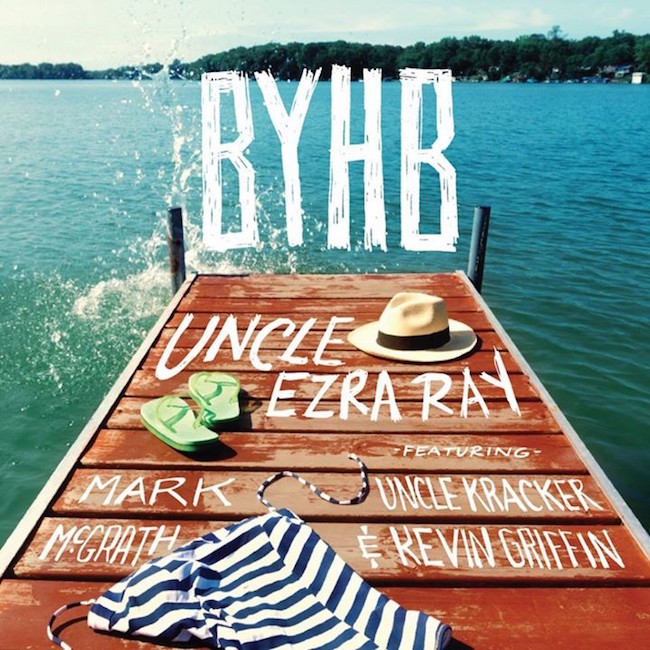 Just as he didn’t think the name Uncle Ezra Ray would make much of a difference to listeners (he was wrong, obviously, given some of the adverse responses), he also never thought he, McGrath, and Uncle Kracker would be so quickly dubbed a “ ‘90s supergroup.” When I prod him to reflect on the idea of Uncle Ezra Ray being attached to the word “supergroup,” he’s clearly amused by the whole thing, emitting a half-laugh, half-groan that’s akin to a slight cringe or the ¯_(ツ)_/¯ emoticon.

“I thought that we should just do something fun, something to get the press talking,” he says, honestly. “I’m surprised more bands who are doing summer tours together don’t do this sort of thing, don’t do singles to promote it.”

The song came together rather easily, despite the fact that all three aren’t in constant touch with one another. He attributes his communication skills and ever-expanding network of music biz friends to all the various gigs he’s working. While some bands can be insular, Griffin is a man with many irons in the fire so to speak. In addition to Better Than Ezra (who just released its eighth studio album, All Together Now, last summer), he’s a renowned songwriter who’s traveled around the world to work with the likes of Sugarland, Howie Day and Blondie. He’s also one of the people behind this September’s Pilgrimage Festival, which, in its inaugural year, boasts an incredible lineup anchored by Willie Nelson, Weezer, Wilco, The Decemberists, Iron & Wine, Sheryl Crow and Band of Horses.

Though “B.Y.H.B.” continues to help Under the Sun sell tickets and garner attention, Griffin acknowledges a larger issue is in play well beyond Uncle Ezra Ray and its party anthem… society’s need to carefully categorize and label things, which Griffin feels is what fuels a lot of the backlash aimed at the band and others like it.

“I’ve always been against the notion that you have to be a certain thing,” he explains. “But people want you to be that. If someone is dissing a song or a project it’s because they want that band to be this thing that is this dated thing from the ‘90s.”

He continues: “For me, it’s always been about evolving and doing different things. I’ve got so many things that I do and this is just one of them. I’ll read the great disses of the band and we’ll just laugh about them. It’s just to be expected; it’s the nature of the beast.” He specifically brings up “hipster blogs that live off irony and rarely say anything that’s sincere,” saying, “I do projects and write songs on albums that they love, but they just don’t know that I’m a writer on this and that track.”

The initial reactions to Uncle Ezra Ray likely won’t have much of a bearing on whether the three-piece forges on as an actual band, as they never really sought to be an official “thing” in the first place. Still, Griffin isn’t dismissing the possibility, either. “People love it when we play it [“B.Y.H.B.”] live,” he mentions, recalling past sets. “In this crazy world, maybe we’ll do another one [single]. Maybe Uncle Ezra Ray will take over the world… in some scary way.”

As he mentioned earlier, there are quite a few party songs sitting in dusty drawers just waiting for their turn in the spotlight. According to him, if Uncle Ezra Ray is the only way those compositions make it out into the world, Griffin is more than OK with taking on that mission, and all the flak that will undoubtedly come with it.