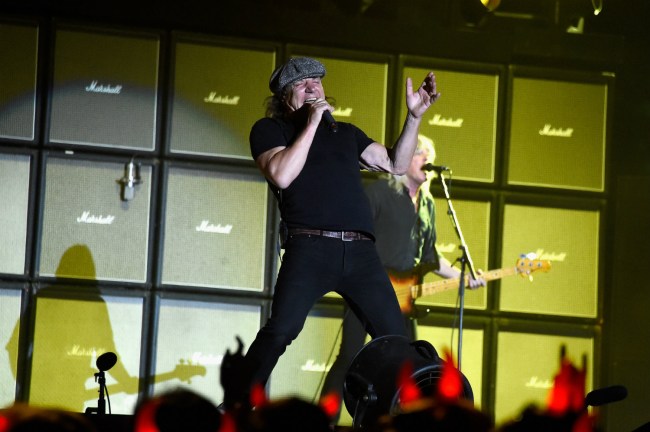 You have probably heard some sort of news involving Brian Johnson, the longtime singer of AC/DC, and the fact that his hearing issues have left him unable to perform the duties of yelling in his sandpapery voice about being shook all night long. This was perhaps within the confines of hearing that Axl Rose had been chosen to replace Johnson for AC/DC’s upcoming European tour. However, Johnson himself had not said anything about the situation, but he has now finally spoken for himself about this matter.

Well, he’s issued a statement through the band’s publicist, but that still counts. In the letter, Johnson says that, yes, doctors have told him that he risks total deafness if he continues to perform in large venues. “I am not a quitter and I like to finish what I start, nevertheless, the doctors made it clear to me and my bandmates that I had no choice but to stop performing on stage for the remaining shows and possibly beyond,” he said.

Despite this, though, Johnson does not see himself as retired from music, saying, “My doctors have told me that I can continue to record in studios and I intend to do that. For the moment, my entire focus is to continue medical treatment to improve my hearing. I am hoping that in time my hearing will improve and allow me to return to live concert performances. While the outcome is uncertain, my attitude is optimistic.”

So, for now, fans of AC/DC will have to get used to life without Brian Johnson fronting the band live, but maybe, just maybe, someday in the future he will be able to record with the group or even take the stage again. Or just maybe he and the band can just do a quiet acoustic show.