This Is How You Win A World Scratch Championship — From The Master, DJ Craze

by: Gregg Rosenzweig
Made Possible By
Grand Marnier
January 27, 2016

Let’s be honest, the most intense scratching you’ll probably do by age 20 is due to poison oak. Maybe chicken pox.

But some, like DJ Craze, have made scratching an art form worthy of serious praise thanks to masterful showmanship and genre-bending sets. Doubt the veracity of that previous statement? Just look at Craze’s trophy case to see what’s up — he’s a five-time DMC world champ and the only solo DJ to win the DMC World Championships three times over (1998-2000).

It’s tempting to call DJ’ing something akin to rockin’ autopilot with a glow stick. But not when it comes to Craze. The guy TIME Magazine called “America’s Best DJ” back in 2001. Between the body tricks, the beat juggling and other generous gifts to turntablism, the Nicaragua-born artist has learned how to captivate the attention of his audience.

That includes Yeezy himself (aka Kanye West), who used Craze as his stage DJ on his world Glow In The Dark Tour in 2008.

These days, you can find the 38-year-old DJ playing clubs in Miami… and doing Grand Marnier commercials (like the one above). Here’s what he had to say about his career, his influences and what it takes to win a scratch championship. Calamine lotion not included.

What’s the secret to winning a World Scratch Championship?
It’s a lot of practice, dedication, studying other competitors, other DJ’s, and just that drive to want to win and wanting to be the best.

What’s been the most epic DJ battle of your career?
I guess it was the U.S. final DMC’s ’98 in New York City. That’s when nobody knew who I was and I surprised everybody and won that. That was when me and my crew first got together and everybody was like, “Who the hell are these kids and where the fuck are they coming from?” It was dope.

What’s your greatest performance of all time, your Mona Lisa?
I gotta pick one? I think the most recent one was a video I put out, like, two years ago. It was called “New Slaves.” That one just because I feel like it came out at the right time, expressing the way a lot of DJ’s are feeling at the moment. I was kind of… scared when I put it out because I thought people wouldn’t understand it, but it went completely the other way.

What did you learn from Kanye?
What I learned from him is what my mom always used to tell me… “Be what you want to be and say it out loud.” So if you want to be number one, tell everybody you’re number one. Manifest it into your life by thinking it and believing it, and that’s one thing that I saw in him. 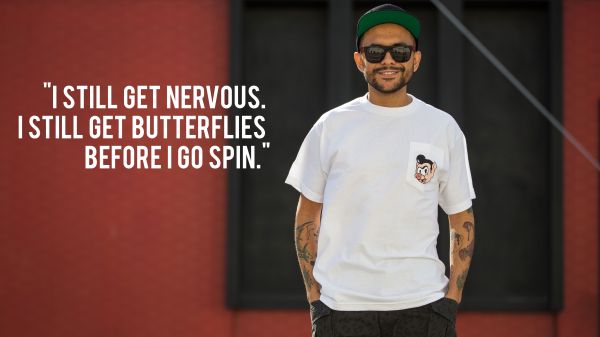 Do you have move that you call your own?
When I did my 1998 USA DMC Finals for the world, that’s what made everybody freak out. They were just, like, “Wow, this guy’s got the whole package. He can beat juggle. He can scratch with both hands. He can do body tricks like the best of them,” and it just sounded good.

Do you have a creative process, something you do to prep for a gig?
I still get nervous. I still get butterflies before I go spin. So I’ll just have a drink or two, and I like showing up to the club at least one hour early so I can see what the other DJ’s before me are doing and I can check out the vibe. Then, boom, and some Jolly Ranchers.

Who’ve been your biggest influences?
For DJ’ing, the guys that most inspired me was probably Qbert, DJ Qbert from San Francisco, and one of my buddies, DJ A-Trak. They were two main guys that I looked up to and was, like, “All right, I gotta beat these guys.”

What kind of legacy do you want to leave behind?
I think every year I switch that one up, but right now, for the next couple years… I want to be the greatest overall DJ of all time. 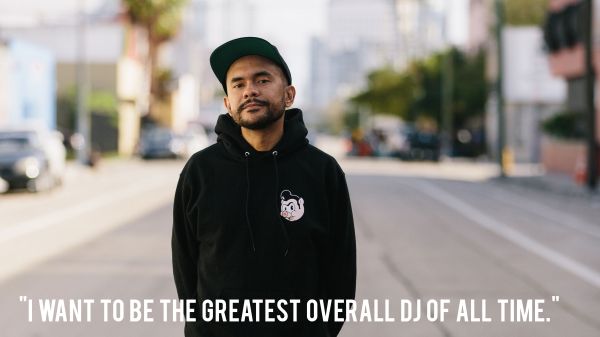