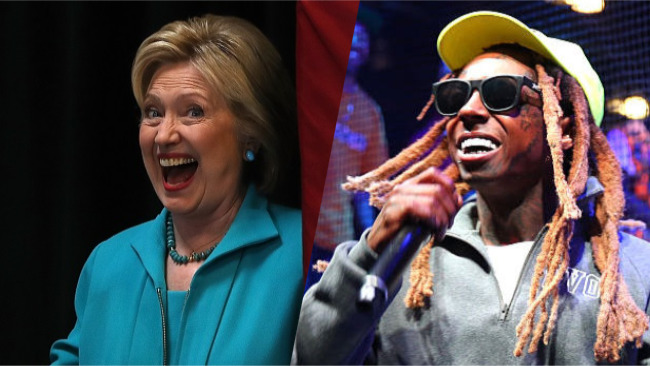 Hillary Clinton and Lil Wayne would seem to have nothing in common, other than the fact neither of them can play the guitar very well, one assumes. However, during her speech at the Democratic National Convention, Presidential candidate Clinton may have referenced Weezy, and Lil Wayne was certainly appreciative of this fact.

During her speech, Clinton said, “When there are no ceilings, the sky’s the limit.” People are saying this is a Lil Wayne reference, because of his famous mixtape No Ceilings and his track “The Sky’s the Limit” off of his other beloved mixtape Da Drought 3. Now, nobody is assuming Clinton actually listens to Lil Wayne. At best, one of her younger, more pop culture savvy staffers slipped that in for her. However, it is also very much possible this is just a coincidence. People say “the sky’s the limit” all the time, and talking about no ceilings is not uncommon either, especially for the first female nominee for a major American political party.

This was enough for the paparazzi, though, as they caught up with Weezy and told him that Hillary had used some of his lyrics in her speech. While he said he hadn’t seen it yet, and had never met Clinton, when told what she had said, Wayne’s response was simple and eloquent: “I f*cks with Hillary.”

The funniest thing is that this is not one of the 50 weirdest things to happen during this election cycle.