Madonna’s Margaret Thatcher Instagram Is Yet Another PR Disaster

Madonna has been no stranger to controversy in her 30-plus years as a pop luminary, but there’s been a lot of it surrounding the release of her 13th album Rebel Heart, and it’s taken a different tone from many of Madonna’s past brushes with headlines.

Whereas, in the past, Madonna made waves for being a provocateur trying to innovate outside of society’s norms and comfort zone, she seems completely the opposite lately… out of touch. It started with her social media promotional strategy, which featured a horrifically ill-advised campaign comparing herself to civil rights leaders. Then, she fell down a set of stairs, saw her album land with an absolute thud, and made out with a clearly disgusted Drake in what was supposed to be a landmark Coachella moment that just turned out to be a flop. Oh, and remember that time she called her son the n-word? Even British radio has declared Madge too old and irrelevant.

So, naturally, posting an Instagram tribute to one of the less liked world leaders in recent memory should fix things. 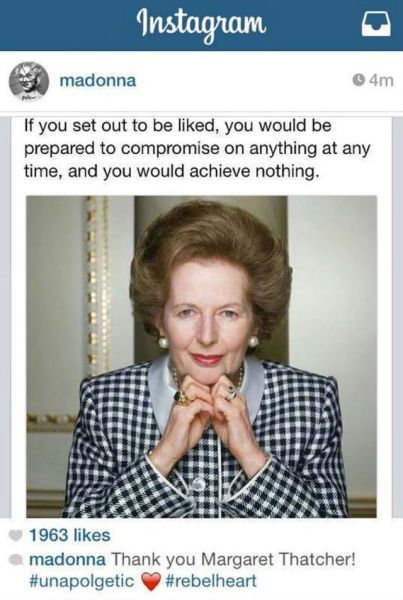 Thatcher, if you’re unaware, earned the nickname “Iron Lady” for her brutish, conservative ways as Great Britain’s prime minister from 1979 to 1990. This isn’t the place for history lessons or political discourse, but Madonna should have figured that honoring someone known for persecuting LGBT communities and allegedly covering up child abuse cases probably wouldn’t go over well. 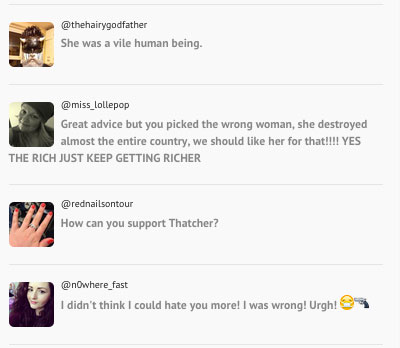 Maybe Madonna senses her relevancy slipping, and she’s pushing in even more extreme directions to maintain whatever grasp on it she can. Regardless, she’s since deleted the Instagram post, proving that Rebel Hearts can’t be defeated under any circumstances, unless you write harsh Instagram comments.