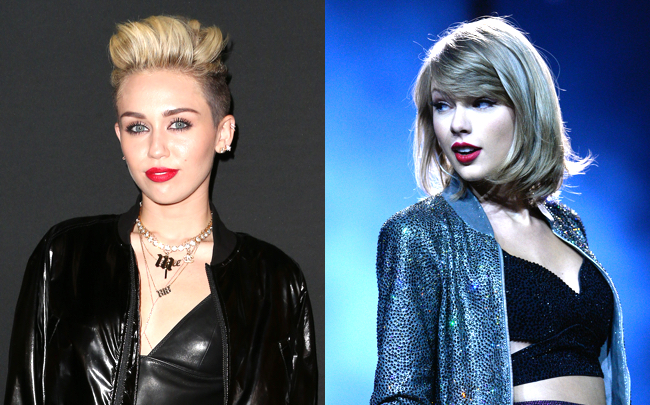 Miley Cyrus is featured in the September issue of Marie Claire looking to drum up publicity for her VMAs hosting gig (which will air August 30). The interview revolves around Miley’s career goals, which include staying true to herself and not thinking about money.

Miley rails against injustices such as sexism and ageism. She doesn’t understand why Kendrick Lamar sings about LSD to acclaim (he doesn’t, that’s A$AP Rocky), yet feels called out as “a druggy whore” when she does the same. She also points out the injustice of Taylor Swift‘s #squadgoals in the “Bad Blood” video. Miley, who is all about free love and airing her girls out, believes Swift’s glorification of violence sets a much worse example than habitual nudity:

“I don’t get the violence revenge thing. That’s supposed to be a good example? And I’m a bad role model because I’m running around with my titties out? I’m not sure how titties are worse than guns.”

Swift’s video, which was already called out as an example of “basic” behavior, was conceived as a revenge fantasy in the ongoing Swift feud against Katy Perry. Miley raises an interesting question, though, as our society does tend to (in music videos and movies) tolerate much more violence than nudity as part of artistic expression.

Miley also reveals exactly why she gets naked all the time. She believes that her photos would be hacked anyway, so she may as well pose without clothes for Instagram and magazines. That would explain why she got naked and hugged her pet pig, I guess.