Jamie Foxx’s Bad National Anthem Has Nothing On These Performances 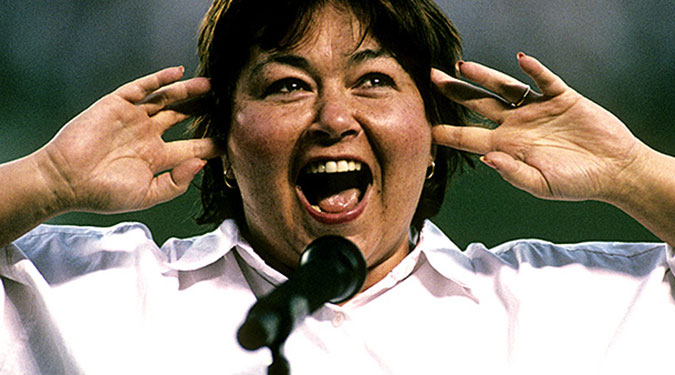 As we saw with Jamie Foxx at the Mayweather-Pacquiao fight, performing the National Anthem in front of judgmental sports fans (not to mention everyone watching and on Twitter) runs the risk of being a minefield of disaster for any celebrity. Screw up just one of those awkward notes or crescendos, and you might find yourself plastered on a viral vine in a matter of minutes. A great Anthem doesn’t tend to move the needle at all, but a bad one? It’ll make you immortal.

Not only is Whitney’s voice on point, but the whole atmosphere here is just spectacular. This set the standard for Super Bowl Anthems.

It’s tough to come up with words to do this justice. It’s almost as if she was trying to make a mockery of the whole thing, but the real crime here is thinking a sitcom character singing the Anthem would end in anything but disaster.

This might be a bit unfair, being that Hendrix is a musician by trade (and one of the best of all-time), but this is one of the most iconic renditions of the Anthem ever. It’s still used in commercials more than 40 years later. Even the most staunch traditionalists can appreciate Hendrix’s distortions on this version.

On the other end, here’s a case of a musician doing the Anthem an injustice. When it comes to performing the National Anthem, always err on the side of cautious and boring. This song is about America, not testing your vocal range or rhythm creativity, which DeLuna butchers throughout… when she remembers the lyrics.

As great as Hudson’s performance is on its own, the injection of soul and jazz instrumentals separates this from the rest of the great Super Bowl performances.

The National Anthem is not a time for getting your groove on. Between the dancers, and Kelly calling for the audience to clap their hands, this sounds like something I would hear in a hotel lobby.

Despite starting off on a shaky note, the Massachusetts native delivered a spectacular performance at Fenway Park, one of the most iconic ballparks in America. It even left Tony Gwynn in awe.

If you’re going to butcher the Anthem, at least be funny about it. Lewis actually apologized mid-song and promised to “make up for it.” We appreciate the gesture, Carl, but this can only get worse with time.