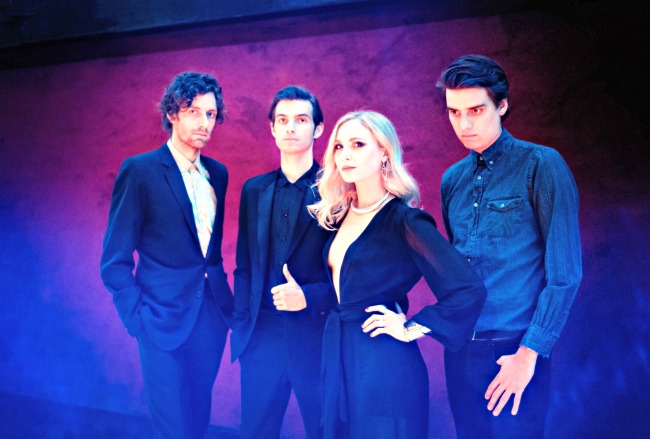 A Los Angeles-based indie pop quartet that’s received shout-outs from Sia and Jessica Alba, PHASES released “I’m in Love with My Life” last month, celebrating summer, happiness, and the end of growing pains its members experienced in their earlier careers. The song blends upbeat synthetic ’80s pop with a bit of Saturday Night Fever, and it’s very capable of instigating a dance party and then staying in your head all day. PHASES’ two other songs, “Cooler” and “Betty Blue,” also exude Southern California beach party vibes.

Z Berg (who is also the former frontwoman of The Like) tells me they’re a group of “best friends” who seamlessly collaborate, whether it’s singing tipsy karaoke together (which is how they formed the band in the first place), learning how to lip-sync backwards for their latest music video, or practicing in the basement of their record label’s headquarters. She says, “We all write so well together that it’s the most creative experience… It’s pretty exciting.”

Formerly known as JJAMZ, the group decided to rename themselves after an ’80s nightclub in the San Fernando Valley after losing a member (guitarist James Valentine of Maroon 5) and then signed with Warner Bros. Records. Members include Jason Boesel (Rilo Kiley, Bright Eyes), Alex Greenwald (formerly the lead vocalist of Phantom Planet) and Michael Runion. Throughout the summer, the group will play on scattered dates, mostly around the West Coast. They’re also recording their full-length album, due out sometime this fall.

UPROXX: I watched the video [for “I’m in Love with My Life”] a couple times. That was pretty hardcore. First of all, you filmed it all backwards. Then I watched the behind-the-scenes video, and it looked like there was a lot of chaos. What was it like being on set with cars falling from cranes and acrobats everywhere?

Z Berg: It was completely insane. It was one of the most surreal experiences I’ve ever had… We went home after two days of shooting and I had no way of explaining to people what I’d just experienced. Also, it was a month of learning the song backwards and learning choreography backwards. I literally still wake up with the song backward in my head. I’d sit in my bed with my iMovie and record it backward and play it back. I have, like, 500 videos of it. We phonetically wrote out the song lyrics. None of it makes any sense. “All right” backwards sounds like “tee-raaaahh.”

Did you come up with the idea? What’s behind the concept of it?

The video concept was all the director, Ethan Tobman. He’s a friend of Alex, and he does mostly movies. Alex planted the seed in his mind that he should write a treatment. It was the most detailed, enthusiastic thing I’ve ever read. He’s a genius; he had it all memorized backward and forward. He had a 360-degree view of what was going on. The song is an odd song; it’s a fun song; it was written very accidentally. It’s one of those things that comes on, and you’re like, “What is this? Where is this? Who is this?” We wanted the video to have that weird, surreal joy.

You guys sing that you ‘don’t need a reason’ to be happy, but you all came from different bands and backgrounds, and you’re all together now… so, you really do have a reason to be happy.

It started as kind of like an accident. At the time there were five of us. It was my four best friends, and we hung out every day anyway. We were out one night at karaoke, a little bit drunk. There were too many people and not enough songs, so we went home and started a band… I feel like I’ve never had a shared vision before in my life like I do with this band. They really are my best friends. It’s like half of my life that I’ve spent with these people, and it’s really exciting that we get to do this together.

How long ago was this fateful karaoke night?

You guys lost a member as JJAMZ, and became PHASES… I know you’re fairly new to the record label [Warner Bros. Records]. How is it going so far?

Unlike any experience I’ve had in my life. We rehearse in their basement. The first time we went there, we went on an extensive tour, and it has a really amazing energy there… We went into the basement and saw there was a lot of empty space, so we asked if we could rehearse there, and they were like, “You know, no one’s ever asked! Sure.” We rehearse in the conference room… The first day we rehearsed, we went upstairs and they were having a party for Duran Duran. So, we hung out with Duran Duran, went back to the basement to practice some more, and every day feels like this amazing Warner Brothers sitcom… The people who work there are amazing and we really love it there. I don’t know anyone who feels the way about their label that we do.

About your influences. Your dad was in the music business [Z’s father, Tony Berg is a former Geffen Records A&R producer.] You were surrounded by music growing up. Did you always know you were going to end up in a band?

I started playing piano when I was 5 and guitar when I was 13, and then started by first band at 15. That’s pretty much all I’ve ever done. I was one of those annoying kids who walked around singing all the time as soon as I could talk. So what are you gonna do?

It’s your calling. Who were your favorite bands growing up?

I listened to only ’60s music growing up. I thought The Beatles were the only band that existed until I was about 10 years old. Since then, it’s been kind of a chronological expansion. I grew up listening to The Beatles, The Beach Boys, The Stones, and then I discovered punk, and then I discovered shoe gaze. While making this record, it’s really the first time I’ve ever really listened to dance music or funk at all. I remember when Michael Jackson died. I was like, “Why is everyone freaking out?” I had never listened to his music. It just wasn’t a part of my childhood. But I spent most of the time making this record listening to Scott Walker and Michael Jackson. It’s a huge scope.

I heard that you almost left at one point to be a folk musician in Nashville. Did you have a strong background in folk, as well?

I had started playing acoustic guitar in the first place… and I’d written about 100 songs for an acoustic folk record. After the last JJAMZ record, we didn’t really know what we were doing, we were a little lost, and I thought maybe that was the time to do it, and I was just going to get out of town. I said to the universe, you know, “If you want me to stay, do your work.” I had a move date, and I was going to get out of town. But then I sat down and played a few songs for Mike Elizondo, who co-produced the record and signed us to Warner Bros., and he was like, “Yeah, sorry you’re not leaving.” Everything fell into place, and here I am. And I’m glad, because I love L.A. and I love this record.

What’s it like seeing Jessica Alba singing and dancing to your song?

It’s like, has someone been reading my diary? [laughs] It’s my favorite thing on the Internet.

Are you comfortable on stage?

We’ve been doing this for a pretty long time. There’s not a lot of superstition or nerves. When you’re on stage with your best friends, there’s a level of protection there.