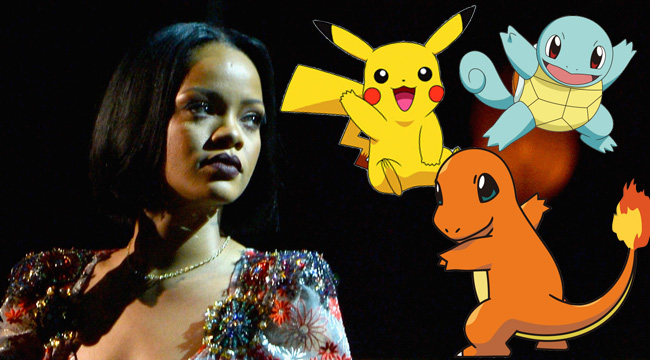 Another day, another controversy surrounding the mobile craze that is Pokemon Go. From players getting confused for burglars, to stampedes provoked by the presence of rare captures to dead bodies being discovered whilst on the hunt, the game has not so slowly aggregated an extensive list of enemies.

Joining a growing number of those on the police force along with parents who intend to sue, the newest antagonist of the strangely addicting game is none other than pop A-lister, Rihanna. Yup, as of late Sunday night, the “Work” singer took her official stance on the artificial reality app. Currently traversing the globe for her ANTI World Tour, Ms. Badgalriri took some time between performing her newest hits to voice her opinion on Pokemon Go. In a video captured on Twitter, the 28-year-old Barbadian singer-songwriter tells her audience she doesn’t, “want to see you catching any Pokemons up in this bitch.”

Not the Pokemon Rihanna!!! ? pic.twitter.com/GA8qUpAwj5

Though she misidentified the proper plural of Pokemon (which is just Pokemon, for those who don’t know), the sentiment remained clear. The pop powerhouse does not want you distracted while enjoying her set that you probably paid quite a bit to see anyhow. Whether you intend to check any of your social media platforms, text “your boyfriends or girlfriends” or catch ’em all, Rihanna urges you to resist the impulse to do so, and put the damn phone away. Even if that means missing out on catching a Snorlax.

Catch Rihanna on tour where her next stop is Prague, Czech Republic on July 26.