Everyone was front and center for Kim Kardashian’s tremendous takedown of Taylor Swift late Sunday night. After the pop superstar denied she gave Kanye West permission for that “owe me sex” line in his “Famous” song, Kim pulled out the receipt of the century in the form of a recorded conversation between Kanye and Taylor in which Kanye tells Taylor all about the Pablo track. For something so huge and epic, even celebrities are taking sides and “living for the drama,” while Taylor’s squad works overtime in defending the now proclaimed Mean Girl of the Music Biz.

Singer Selena Gomez wasted no time in proving her loyalty to Taylor by sending a few subtweets about the Kardashians misusing their celebrity. “There are more important things to talk about… Why can’t people use their voice for something that f*cking matters?” the UNICEF ambassador tweeted after her mentions were bombarded with messages.

There are more important things to talk about… Why can't people use their voice for something that fucking matters?

Truth is last thing we need right now is hate, in any form

This industry is so disappointing yet the most influential smh

When a fan confronted Selena about using her own voice to support Black Lives Matter, well… 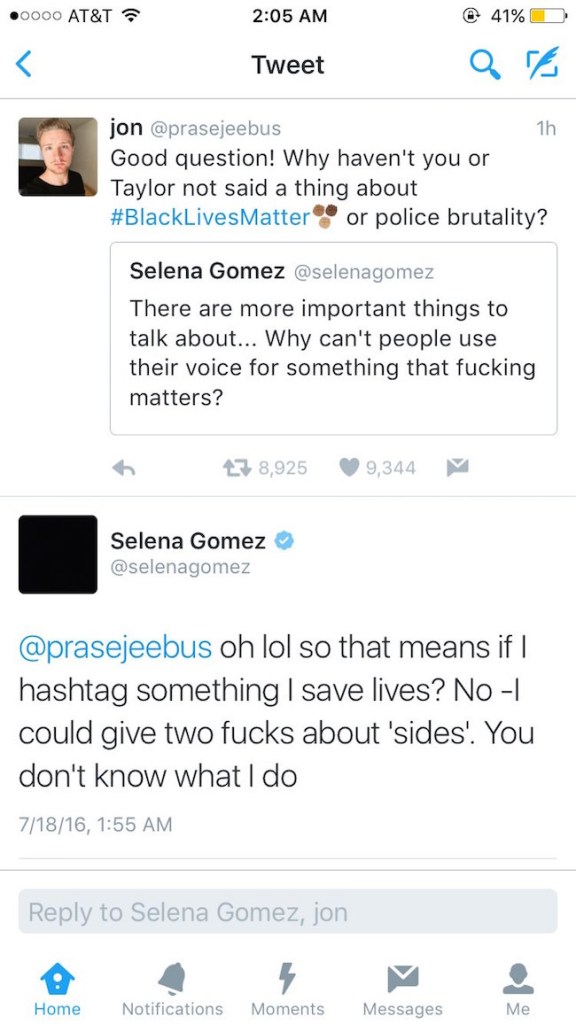 The tweet was later deleted, but Selena’s original sentiments were also shared by Chloe Grace Moretz.

Apparently, the “hole” bit was a little confusing for Khloe Kardashian, who wanted to know if Chloe was talking about her butthole (NSFW picture in this tweet). Khloe still isn’t over the actress’ comment about the 382nd time Kim Kardashian got naked.

@khloekardashian fact check: first photo is me filming my movie Neighbors 2, the second photo is some girl who was wrongfully photographed

Ruby Rose just wants people to stop bullying one another and opt for love instead, writing on Twitter, “I believe love is what the world needs right now.”

Nobody likes being bullied or made to feel worthless.. Yet so many people will go above and beyond to make others feel that way.

The Internet/social media has endless possibilities, positive possibilities but more often than not its a sad place. pic.twitter.com/eQzNvR2rSy

I just think we could do so much more if we were not so judgmental and mean to one another.I believe love is what the world needs right now.

Meanwhile, Zendaya, Demi Lovato and Pharrell Williams are #TeamKanye. While they didn’t post anything directly about the feud, they made sure to “like” tweets denouncing Taylor.

Taylor Swift now has bad blood with Zendaya too!! What a night!!!! https://t.co/82I3obEw21 pic.twitter.com/52VQGpQWQN

Looks like Pharrell isn't here for Taylor Swift either… ? pic.twitter.com/DCA09om0GL