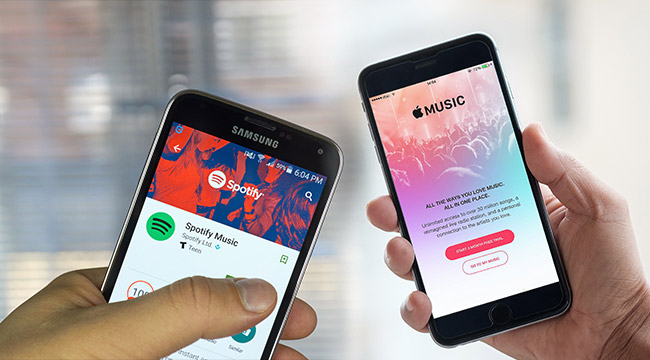 And now, news from the front as the Streaming Wars continue on…

With the summer months upon us, the Streaming Wars show no sign of cooling off and, like the weather outside, continue to heat up. The most recent battle once again has Spotify facing off against Apple Music, with the Swedish company lobbing accusations at Apple that the company is blocking an updated version of Spotify’s iPhone app as a way to essentially cut their supply lines. This truly is an ugly war.

Earlier this week, Spotify and their legal team sent a letter to Apple, in which they claim that “Apple is causing grave harm to Spotify and its customers” by turning down the streaming service’s latest version of their popular app. According to the letter, the tech giant rejected the most recent update because of “business model rules.” Seemingly adding insult to injury, Apple has demanded that Spotify conduct their billing via Apple’s billing system if Spotify wants to continue using “the app to acquire new customers and sell subscriptions.” Spotify is not taking these demands lightly and are said to be gathering ammunition (which would include this latest rejection) in a larger fight regarding how Apple does its business and how it governs those that rely on it for their business.

“This latest episode raises serious concerns under both U.S. and EU competition law,” Horacio Gutierrez, Spotify’s general counsel, wrote in the letter. “It continues a troubling pattern of behavior by Apple to exclude and diminish the competitiveness of Spotify on iOS and as a rival to Apple Music, particularly when seen against the backdrop of Apple’s previous anticompetitive conduct aimed at Spotify … we cannot stand by as Apple uses the App Store approval process as a weapon to harm competitors.”

Spotify has been involved in an escalating feud with Apple for the past few years; a feud that according to some observers dates back to 2011, when Apple first introduced a policy that said apps that are subscription services are required to use Apple’s billing system. Well, actually, they are not required… but they are not allowed to use an alternate payment method, so you know, kind of required. If you do use Apple’s billing system, it comes with a price tag of a monthly fee of up to 30 percent.

For obvious reasons, Apple doesn’t want subscription services who have apps on their products promoting alternate methods of payment and billing. The tech giant has managed to get the majority of publishers with apps of this sort to acquiesce, use their billing system and pay the fee. Spotify refuses to roll over, though and while they have used Apple’s billing system, Spotify has passed on the fee to its customers, with customers who use Spotify on Apple products paying a monthly rate of $13, as opposed to those who don’t paying $10.

Spotify further angered Apple last fall, when they ran a promotion that provided incentives to people who signed up for their service via their website, as opposed to Apple’s app store. In early June, Spotify ran the campaign again, which according to Gutierrez, led to Apple threatening to remove Spotify unless they knocked it off. Spotify agreed, but they also put an end to providing the ability to pay via the App Store. And that’s how we got to where we are now.

Yet as a rival in the streaming service game, though, Spotify doesn’t have much to worry about. They have nearly double the number of subscribers Apple Music has. They’ve also been circulating their letter to Apple to various members of Congress, and managed to gain a strong ally in their fight against Apple.

In a speech Wednesday in Washington, Sen. Elizabeth Warren, attacked Apple, as well as Amazon and Google. The potential VP candidate and thorn in Donald Trump’s side said that all three partake in practices meant to “snuff out the competition” and that Apple in particular “has long used its control of iOS to squash competition in music.”

And the Streaming Wars continue.