Tyler, The Creator Has Put Out A T-Shirt That He Says Proves He’s Pro Gay Rights 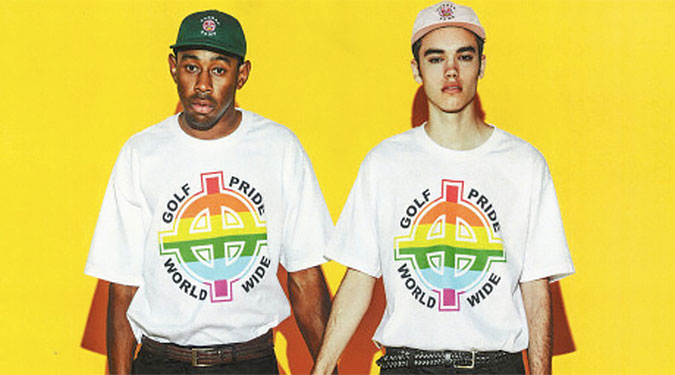 Often criticized for lyrics that many interpreted to be homophobic, Tyler, the Creator has taken a stand for gay rights with a new t-shirt he’s released for sale.

Announced on his Tumblr page, the Odd Future rapper is releasing a pro-gay shirt that includes a reappropriation of the White Pride World Wide logo, drawing an ironic connection to white supremacist groups such as the KKK and Aryan Nation.

As Tyler explains, he was particularly intrigued by the cultural suppression from the Nazi regime in the 1940s:

Now it doesn’t take a rocket scientist to know that these guys aren’t fans of Blacks, Gays, Asians or anything else that doesn’t fit in “white” box.Now having the thought process that i have, i asked myself some questions: What if a black guy wore this logo on a shirt? Would he be promoting self hate? Would he be taking the power out of a shape? What if a gay guy wore this on a shirt? Would he promoting Homophobia? Then BAM! I Had it.

Tyler isn’t known as much of a socially progressive rapper, thanks to his controversial early work — littered with references to rape and homophobic slurs — but he’s made efforts to distance himself from that lyrical content on his last two albums, Wolf and this year’s Cherry Bomb. The stigma of his start remains; it’ll take more work for Tyler to fully make over his public perception, but he’s trying.

He also talked about that public perception of his work (censorship is ours).

Ever since my career started, i’ve been labeled as a homophobe, simply because of my use of the word f*ggot. Again, trying to take the power out of something, I WAS NEVER REFERRING TO SOMEONES SEXUAL PREFERENCE WHEN USING THAT WORD. I mean, i’m legit one of the least homophobic guys to walk this earth but, most people just read the surface.

Others say that’s not enough. If you’re interested, you can buy the t-shirts at the Golf Wang shop.