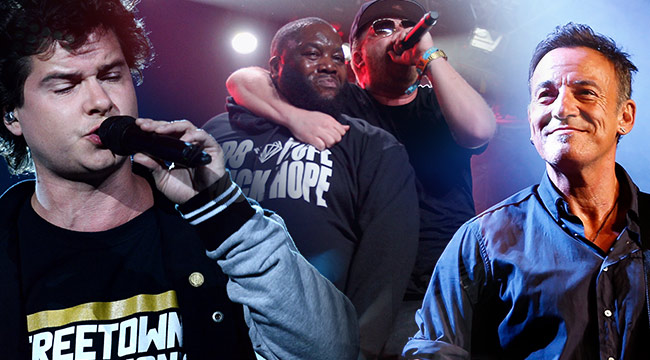 Dads and music typically go together in such a negative way. You want to hear music that’s “not your father’s” rock or hip hop or what have you. Calling a band Dad Rock is the easiest way to sink it to levels so uncool and sensible that Jeff Tweedy would be ashamed. But Father’s Day is soon upon us and if Twitter has taught us anything, Daddies are very good right now. Perhaps not in the way that we’re going for, but we’ll take the victory if we can. So to celebrate our paternal parents, here are some of our favorite dad songs.

Bob Seger is a well-respected musician the world over, but he’s a legend in Michigan. So, having a father of a certain age, and with a certain penchant for rock music, who is Michigan born and bred, means Bob Seger is a more particular example of the music of my father than, say, The Beatles. And, if you are going with a Seger song, why wouldn’t you go with “Old Time Rock and Roll”? What speaks more thoroughly to what the ethos of a man of a certain age’s feelings about music might be? Just take those old records off the shelf.

An unconventional pick — I know. But hear me out. I have a 14-month-old daughter and early on, to get her to cool her jets while I was changing her, I’d sing to her. And I’d sing the songs currently stuck in my head, so who knows what would come out. But I struck gold with this song. It became my go-to, especially the chorus. She started to like it and it made her smile, then laugh, which as a new dad is a wonderful thing to happen while trying in vain to change her. Sure things have changed and now I’m screwed if I’m not singing about that damn itsy bitsy spider, but now when I hear this song, it makes me smile and think of my daughter.

There are a lot of songs that remind me of my dad. Songs of the ’60s on the oldies station from men like Sam Cooke or The Drifters flood through my brain, reminding me when I’d ride in the back seat and listen to him sing along off-key. But for some reason, instead of the real thing, I always come back to the imitation soul of “Sledgehammer” when I think of my father. The track is my first musical memory ever; my sister and I were mesmerized by its colorful and innovative video on MTV. We were so obsessed that we would wear it out and listen to it every day, and I’m certain my dad got more than his fill of Peter Gabriel. But every once in a while he’d bring the song up to me and laugh. Now having the hindsight of music being such a driving factor in my life, when I hear the song, I think of my dad letting me endlessly (and probably annoyingly) indulge in something I truly loved and how thankful I am that he was someone who cared about me that much.

Kid Creole and the Coconuts – “Annie, I’m Not Your Daddy”

Of course it’d be lovely to have Kid Creole as your pops, but as he notes to poor Annie “If I was in your blood/ you wouldn’t be so ugly.” This whole thing would probably be heartbreaking if Kid Creole and those marvelous Coconuts hadn’t made it a proclamation you wanted to stumble-drunk dance to. Also, the video rules, dude dad.

Like most new dads, I assume, I’m devoted (if not obsessed) with the idea of using the many, many mistakes I’ve made in life to teach my son to be the best human. And I’m terrified of the idea that he won’t listen and will just go off and make his own mistakes. So, this jam really resonates with me for that reason, but also because it f*cking rocks. Plain and simple, my son better like Queen.

Family of the Year – “Hero”

When my sh*tty high school garage band tried (and failed) to recreate the angsty magic of Blink 182, Yellowcard and a bunch of other pop punk bands, my dad did his best to re-educate me with “real” rock ‘n’ roll. Classic tunes like “For What It’s Worth” by classic bands like Buffalo Springfield. I ignored him at the time, but later came to realize just how much better his bands and songs were, which helped me change (i.e. mature) my musical tastes as an adult. Nowadays we sometimes agree on the quality of the latest releases, but not always. Hence Family of the Year’s “Hero,” a song that was neither introduced to me by my dad, nor is it one he necessarily likes. But since I first heard it watching Richard Linklater’s Boyhood, and since it’s all about moving on from where you began, it always makes me think of my dad.

This is the song equivalent of the father/son game of catch from Field of Dreams. I’m not the most emotional guy, but it’s hard to listen to “7 Years” without tearing up at least a little. Not only does it remind me of the ephemeral nature of life, but as a dad to a little dude, it reminds me there’s a chance my son won’t want to see me when I’m 60 years old? Unbelievable. After all the diaper changes, financial outlay and sacrifices in life, that’s f*cked up. No pressure not to screw this up.

Bruce Springsteen – “Born In The U.S.A.”

Honestly, I could have chosen any Bruce Springsteen song but this one reminds me most of dads. It’s no secret that every dad loves Bruce, not just dads in New Jersey either, dads all around the world. I feel like this song always came on at a majority of the family cookouts or Fourth of July events I went to as a kid, and when it did you’d always see a dad raising his fist to every snare hit. The song also reminds me of my friend’s dad who is obsessed with The Boss and always had a Bruce album playing every time I went over.

In my family, dad songs go by a different name: “road trip music.” Five family members and five seats meant that us kids were always out of reach of the radio and dad ruled the CD player with an iron fist. Yearly trips to visit family meant a steady stream of greatest hits albums: Songs You Know By Heart and Frank Sinatra’s Reprise mingled with Zeppelin collections and the crazy-long Styx’s Greatest Hits. But no image brings to mind my father’s New Balance shoes and Marlboro cigarettes more readily than Bob Seger standing on a train track.

We played Seger’s 9-times-platinum (!) Greatest Hits so much that even dad eventually tired of it, injecting some fresh blood into the playlist with a burned CD of Seger tracks that didn’t make the cut. Until you’ve heard “Turn The Page” more times than your own name, you can’t understand the joy we wee Galbraiths felt shouting “Oww K-k-k-k-k-k-Katmandu.” And since Father’s Day is all about the positive, that has to be my pick for the dadliest track.

When I was a child my father would often play Edith Piaf in the car. The song that stands out is Piaf’s “Milord,” (such a dad song!) which he would encourage me to sing along with because even though it’s French anyone can sing “da da da da da da,” — or so he’d insist. I was a shy child so I was resistant to sing along to any song, even if I loved it and knew all the lines, so instead I would bashfully stare out the window and just absorb every detail of the song. So now, as an adult, I can’t stop singing and this is honestly the best song to sing along to. I think I will duet this song with my father on Sunday.

Paul Simon – “The Boy In the Bubble”

Being a parent sounds — to be honest — awful. Not only do you have to worry about a tiny human who exists only to suck up your time and money, but have you ever changed a diaper? It’s not fun. Really, the only good thing about becoming a mother or father is how you can make your child root for the sports teams you root for, watch the TV shows you watch, and most importantly, listen to the music you listen to. Zen Arcade is probably too intense for a toddler, but I can’t wait to play my future child (who hopefully never finds out I called them a money-sucking poop machine) Paul Simon’s Graceland. My parents played it for me when I was young, and I want to do the same. Then Zen Arcade.