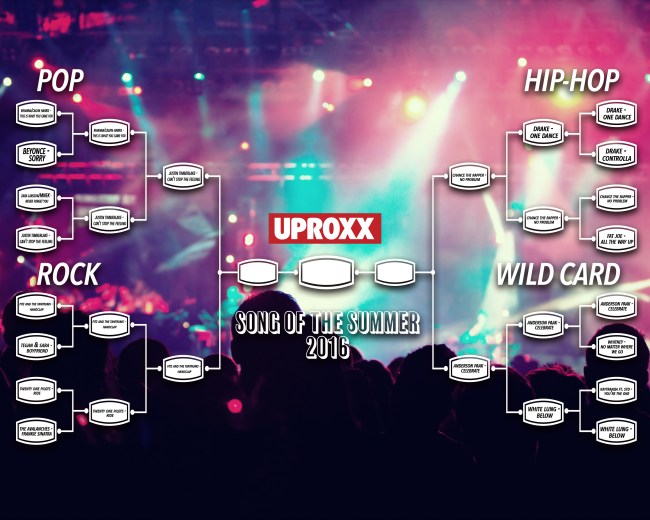 Another week passes and another round of brutal cuts in our hunt for the Song of the Summer. Now that the individual brackets are done, we are down to three familiar faces and one very deserving newcomer.

Both Chance The Rapper and Justin Timberlake are no strangers to feel-good summer anthems, and Fitz & the Tantrums have been making catchy earworms for years. Anderson .Paak is the newest of the bunch, but if his strong showing so far has been any indication, he could wind up stealing the whole thing. You know what to do at this point: Vote early and often. Voting for this round ends on Monday, July 11 at 9 a.m. 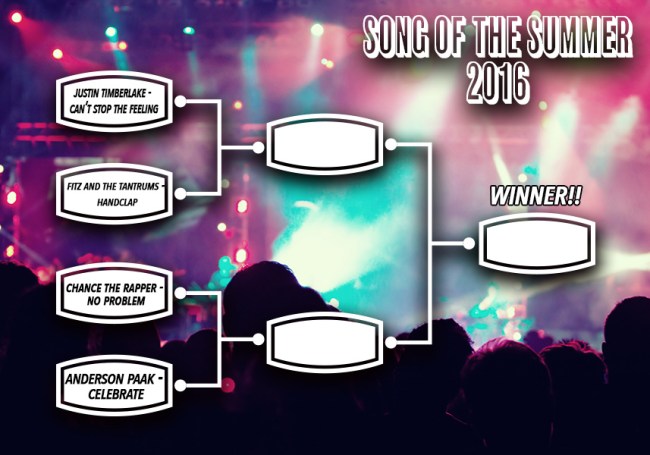 You’ll hear this song more this summer than any other song in the running. You’ll hear it at your cousin’s wedding, at the bar or club, at the gas station. It’ll be playing where you buy new flip-flops, where you get coffee, where you get delicious fish tacos. Your neighbor will be listening to it during a cookout; the people next to you at the beach will be listening to it. And every time you hear it, you’ll be totally okay with it, if not super okay with it because it’s a near perfect pop song. Actually, it might be a perfect pop song. JT strikes again!
– Ryan O’Connell

“Celebrate” is truly a song for any occasion. If there’s any knock against Anderson .Paak’s perfect track being Song of the Summer, it’s that it doesn’t sound disposable enough. Summer songs are typically of their time and don’t have much life beyond that. This track from Malibu sounds like it’s always existed, to the point that it almost feels like a cover song on first listen. It’s just hard to believe that no one has captured the spot-on summertime theme of “You’re doing well, I mean you’re not dead/ so let’s celebrate while we still can” on wax before now.
– Alex Galbraith