Vince Neil Is Being Sued For $75,000 By A Woman He Allegedly Assaulted 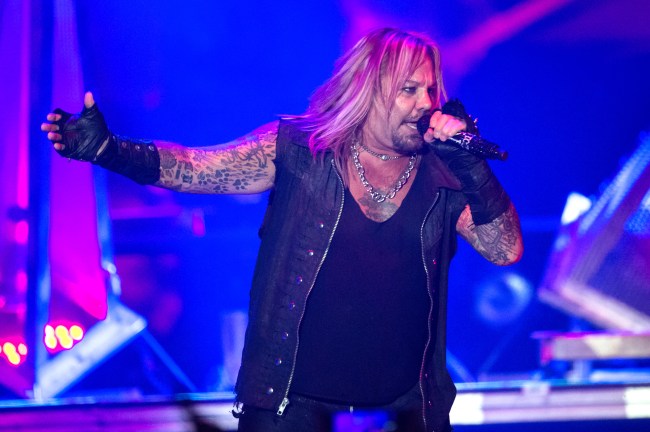 In April, Vince Neil and Nicolas Cage were involved in a fight outside a hotel in Las Vegas. Footage of the video quickly became popular on the internet just for the sheer absurdity of it all. Basically, Nic Cage + Vince Neil + Las Vegas + brawl sounds like a game of mad libs, and it was hard not to chuckle at just how ridiculous the whole scene was.

But to do that would be to ignore the darker side of the incident; that it took place because Cage saw Neil attack a woman, and was attempting to restrain him. Now, the woman in question, Kelly Guerrero is suing Neil for $75,000 in damages. According to Guerrero, the incident began when she and her 14-year-old son approached Cage to tell him they were fans. While this was going on, Cage and Neil were apparently engaged in “a bit of horseplay” with Cage placing Neil in a headlock. Once Cage let go, Neil allegedly attacked the woman without any provocation. It was at that point that Cage went after Neil, as seen in the infamous clip.

It is worth noting that Vince Neil has a history of unfortunate behavior while under the influence of alcohol, as well as violence towards women. There was his assault against a sex worker at the Bunny Ranch in Nevada in 2004, as well his drunk driving incident that resulted in the death of Hanoi Rocks drummer Nick “Razzle” Dingley. The lawsuit against Neil did not mince words when pointing this out:

The lawsuit claims Neil was “severely intoxicated and/or under the influence of powerful drug(s)” and brings up the singer’s 1984 vehicular manslaughter incident and the assault of a sex worker at the Moonlight Bunny Ranch in 2004 as instances of a ”long history of self-centered, irresponsible, drunken, and violent behavior,” and “attacking those he apparently perceives as weaker and subservient to him, including women and purported fans of the aging ‘rock star.’”

Neil is scheduled to appear in court on July 27 for a misdemeanor battery charge stemming from the incident.