Yumi Zouma Just Released A Summer Record For All Seasons 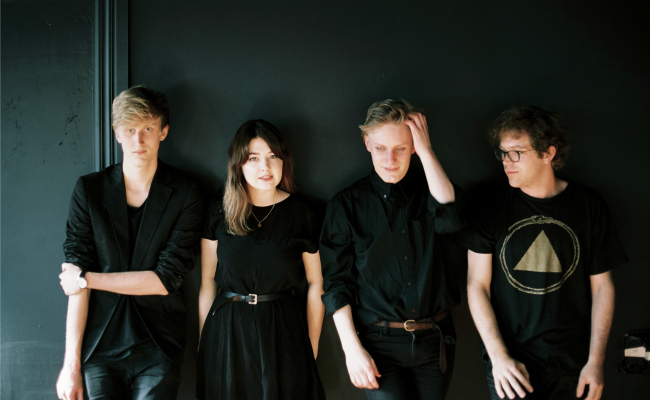 The members of Yumi Zouma can never agree on what to listen to when they’re touring. Everybody has their own tastes, and those preferences don’t often align in the same spot. So while some days Ice Age is getting played on the road, other times it’ll be Ariana Grande. The band fluctuates between post punk and straight pop, with a lot of variance in between.

“We each bring a little of our own influences to the table when writing together,” singer Christie Simpson says, “and it keeps things interesting.”

Things have been interesting for Yumi Zouma for a while now. The four New Zealand natives all live in different parts of the world. Christie is still in their hometown of Christchurch, while Sam Perry is in Wellington. Guitarist Charlie Ryder lives in Paris, and Josh Burgess resides in New York City. The distance forced the band to record their two previous EPs essentially in parts as a giant game of telephone — something that’s not at all foreign in the digital age — but each individual artist brought their own characteristics into the songwriting process. They’d be tagged in, work on it, pass it off, and the next person would get the baton.

While this was at once exciting and led to some really refreshing tracks, it was difficult for the band as a whole to be cohesive and shape its own identity. Even doing things as simple as taking press photos or shooting a video was tough early on, and it wasn’t until the band released their second EP that they even began touring.

“EP II was handed in the night before our first show,” Ryder says. “That was the start of an 18-day tour in Australia, and then going to America and New York. The label wanted to have something finished before then, so we could take time to tour, so we were figuring out how to play all the songs live, and band practice. We gave ourselves one week to learn how to play everything, and finish the EP. We’d practice during the day and stay up all night trying to finish this EP. It was the most stressful period because we weren’t sleeping and it was horrible, but in the end, we got it done.”

The tour brought the band closer together, and tightened them as artists. Naturally a full-blown album, Yoncalla which releases May 27, on was the next logical step. When the tour ended, they had a bunch of songs to lay down, and vocals were put down in Josh’s bedroom closet in the city where it was possible to hear road noise in the background of Simpson’s singing. They then recorded a bit more in Paris while the rest of the band slept on Ryder’s floor. And eventually they took to Motorbass Studio to put everything together.

For it being the first time in a professional studio as a group, tensions were high, and naturally there was an adjustment period. While on the EPs, it was easy to track who wrote what part, and identify individual songwriting credits, the three days in studio were a blur.

But touring, being in the same room together, and each individual’s life experiences all shifted how the songs were written and how they came together. A bunch of the original songs written while on the road were scrapped for all new tracks, and the result was a tight and cohesive 10-track set that feels all at once airy and weighted.

“All that experimentation had to be done in real time in front of everyone else,” Ryder says, “which can be frustrating if things aren’t going the way you had originally envisioned them as a writer, or if it’s taking a while. I think we realized that you sort of have to let that go if you’re going to get anything done. And in the end, the songs always end up completely different to how we’d imagined them anyway, so fretting about little things at the start of the process is totally just a waste of time. Once we’d figured that out, things went really smoothly, and recording together was a really fun process because, for the first time, we were coming up with random stuff from bouncing ideas off each other in real time that we wouldn’t have written individually.”

With a full album release comes another full touring schedule, and extra press, and the opportunity for the band to put themselves out there. Which stands in stark contrast to how things were when they first started recording.

There was this mystery when the first couple EPs came out about the band. The music just floated out there, as a lot of music does these days, and landed in inboxes. Then the tracks made their way online. Yumi Zouma was judged on the music, and there wasn’t anything front-facing to go along with it. But the band always thought of it as a negative thing. Maybe at first, it was exciting to have a bit of mystery, but it was hard for the band to get together.

That’s why it’s almost surprising to see the band’s caricatures without faces on the album cover. The cover was designed by a famous New Zealand artist named Henriette Harris, who often blurs out faces or leaves them blank. The band liked the look and felt lucky that she was a fan of their music. But next time, Charlie believes, they’ll try to make it very obvious who is who.

“You are who you are as people,” Ryder says. “The band is who they are as people. Bands don’t get popular or stay popular by maintaining a sense of mystery. We’re happy now when we’re touring that we can let people know who we are. We always wanted to sell it as ourselves, but it did help in the beginning to not have to be explicit when we were touring and figuring out who could play it live. For a lot of shows, we’d sub people in and out and play it as a three-piece. Not having the band super out there probably helped with that and gave us a bit more flexibility. From now on we can’t really do that anymore.”

If the band isn’t as nebulous as it used to be, the music still is. Yoncalla isn’t sure which season it wants to live in, and that’s a good thing. The sound is airy and easily digestible, which the band loves based on their shared affinity for pop music, but the lyrics and certain sounds feel more transitional. It’s not just going to make you feel good. There’s sadness all over the album. So while the label was pushing it as a spring debut, and the sound invokes summer, certain band members feel like it belongs in the fall.

But it’s an album you can listen to during the summer without regret. “Text From Sweden” has a driving synth line as fun as any from the 80s. The guitar work in “Haji Awali” is infectious enough to stick with you during walks and on the train. And the chorus of “Short Truth” explodes with the ferocity of any buzz band in any recent memory. It’s a fun record, and it’s gripping enough to keep you hoping not only will Yumi Zouma let us know who they are, but that we’ll continue to find out more about them down the road.

As for what the band wants listeners to take away, well, it’s nothing too complicated.

“In all honesty, I really hope that people enjoy it and find it something they want to listen to again,” Burgess says. “That sounds so simple and maybe like a cop out answer, but I think we would all much prefer that this was a record people put on, pour themselves a gin and tonic, and finally pluck up the courage to text that special someone how they really feel.”