You ever notice how when a women’s wrestler says anything about progress or change, they’re almost immediately told to stop talking about it and start doing something? Well, A.J. Lee, a well-known lover of video games, is doing just that. Girls Makes Games is a part of the San Jose-based LearnDistrict, an educational company committed to providing children with opportunities to expand their knowledge through various games, programs, and workshops. A.J. is offering a scholarship for girl-gamer hopefuls to attend one of these programs in the Chicago area: 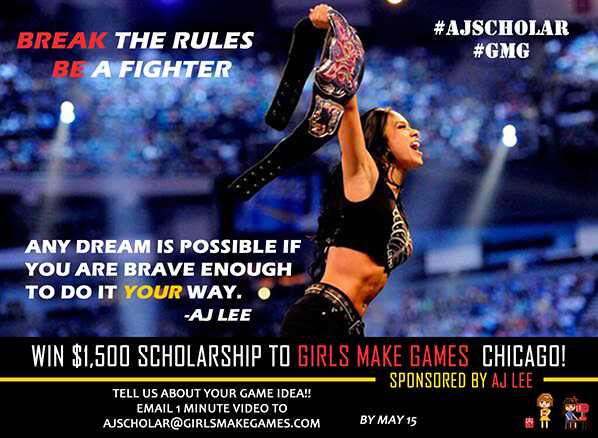 We’re thrilled to announce an amazing collaboration with the wonderful AJ Brooks of WWE fame. AJ is a champion both in and out of the ring, fighting to bring more girls into STEM fields. An avid gamer herself, GMG is proud to team up with her to announce the AJ Brooks Scholarship Contest!

The GMG flagship three week camp helps girls ages 11-14 take a creative concept and turn it into a fully functional prototype. Not only do campers have a finished product at the end of the three weeks, they also compete nationally for the top prize, a chance to have their video game developed and published by LearnDistrict, the educational company behind GMG.

Currently, women make up 47 percent of gaming consumers, yet 12 percent are actually involved in the production of these games. Recent hate movements have spawned enough harassment and personal, physical threats that the number of women making and writing about games has already been affected. Marginalization in both the gaming and wrestling industries is pretty easy to spot and terrible to go up against, so it’s amazing to see someone as outspoken as A.J. continue to buck the trend and be a positive voice for women and young girls.

You can find more information on the scholarship program at A.J.’s website, and learn more about the great work Girls Make Games is doing here. In the meantime, we encourage you to watch this video that shows the program in action. That is, you know, when not wistfully remembering that time A.J. tried to use Kitana’s fan lift against an opponent in a battle royal: