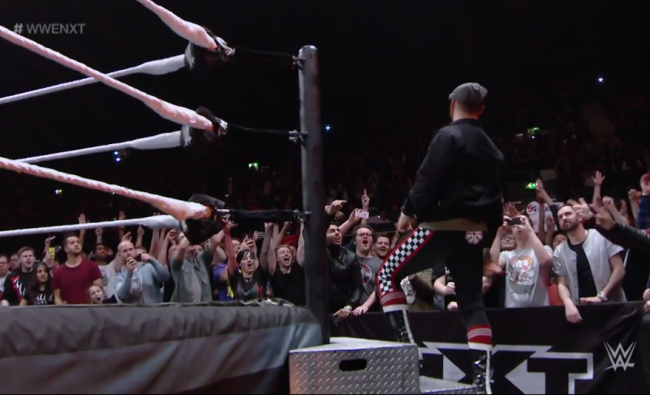 Previously on The Best and Worst of NXT: NXT TakeOver: London happened, and it was wonderful. This episode was taped before (and a little after) that event, and was aired last week. We were off on Christmas Eve and Christmas so we didn’t get a chance to recap it, but this week’s show was a Best Of, so here we are. The Best and Worst of NXT TakeOverMore. Super TakeOverMore LIVE! No.

If you missed it, you can watch the episode here. If you’re new, we do a weekly Best and Worst of NXT column as well, so you should go here and check that out, along with all of our other NXT coverage. With Spandex is on Twitter, so follow it, and like us on Facebook. You can also follow me on Twitter.

Shares, likes, comments and other social-media things are appreciated, so don’t be afraid of those.

Worst: Nobody In WWE Watches Doctor Who

“So apparently Aiden English is Sherlock Holmes, and uh, Simon Gotch would be Watson?”
“You are accurate, Rich!”

No, no. You’re not. That’s not Watson, that’s Tom Baker, aka the fourth Doctor from Doctor Who. It’s the most obvious possible reference to the show, one so ubiquitous that it popped up on The Simpsons before I knew what a Doctor Who was. I wouldn’t be bothered by this so much if (1) they didn’t have a week to catch it, and a bunch of dorks editing the show who really should’ve caught it and said something, and (2) the host of a show called “Culture Shock” pretending he doesn’t know what Doctor Who is because “nerds in their parents’ basements.” What an obscure reference to the most popular iconography of a 50+ year old popular thing! It’d be like someone coming out dressed as Darth Vader and William Regal saying they’re definitely Edmund Blackadder.

The only upsides here are that:

1. Simon Gotch is awesome enough to wear that costume to the London show, and
2. Vince McMahon was probably somewhere laughing like a child and happily clapping his hands because somebody wore a Sherlock Holmes costume.

I wish this had been on TakeOver proper. One day, Chad Gable and Jason Jordan are going to get on a live special. That day will be in Dallas, and it will be THE GREATEST.

But yeah, this week’s opener (and the best part of the show, ignoring the emotional relief of the main event) is a four-way match between Sherlock Holmes and his friend Extra Sherlock Holmes, Jordan and Gable, Blake and Murphy (once again in their A Nightmare on Elm Street gear, which I’m surprised Byron didn’t say was “Freddy Mercury inspired”) and the Hype Bros. The match, as all Jordan and Gable matches should be, is about how much the crowd wants to see Jordan and Gable and Jordan and Gable only. When either of them is in the ring, the crowd launches into that chant in the boldface. When they’re not, the crowd’s going WE WANT GABLE. It’s great. I continue to be in love with the fact that the most internationally beloved thing happening in NXT right now is two awkward collegiate wrestlers who throw people around and emasculate them with cool wristlocks.

There are two really special moments in the match, and they both happen at the finish. The first is Jason Jordan throwing a motherf*cker over the top rope onto all the other motherf*ckers with a belly-to-belly suplex. Nobody else in the world should be allowed to throw that suplex now that we’ve seen Jordan do it. He’s doing for belly-to-belly suplexes what Dr. Watson did for wibbly-wobbly, timey-wimey stuff.

The second is Chad Gable. Just all of him. But to be more specific, he spends most of the match getting his left leg destroyed. When Jordan gets on a roll and throws up the Grand Amplitude, Gable catches it and goes into a bridge. He can’t hold it, because his leg is injured (and wrestling is supposed to be real, and the sh*t that happens to you during the match is supposed to have actually happened), so he turns his right foot and BRIDGES ON ONE LEG. Look at it, it’s like looking at Starry Night: 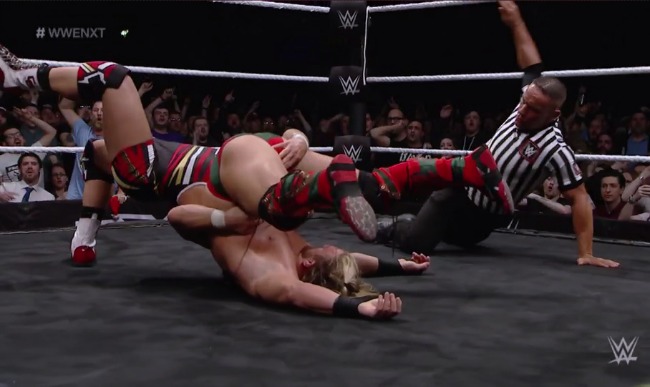 Not only is it physically impressive, but it shows what a great mind for the sport the guy has. He gets that if you’re hurt, you’re supposed to be hurt, even when you’re doing moves. That doesn’t mean you have to flop around with your mouth open clutching your leg every time you move, but if you do something that requires your leg, it should be compromised. Chad Gable for NXT Champion. Chad Gable for President of the United States.

Match two featured the formal, “now he’s a steady character you’re supposed to pay attention to” debut of “The Drifter” Elias Samson. He faces Bull Dempsey, who is trying very hard but also visibly slipping into the abyss. Samson looks like he bought his gear at Johnny Mundo’s garage sale and wrestles exactly like Fandango, if Fandango was super serious. He even does a finish off the top rope. It’s … weird. It’ll probably grow on me, but this didn’t light my world on fire. I reserve the right to take this all back if they reveal he’s Fandango’s pretentious younger brother.

If you want another example of why it didn’t work for me, the guy’s victory taunt is him playing guitar. While unrelated guitar music plays over the speakers. I think Tanahashi has a more believable guitar celebration. The character only exists so he can hit people over the head with the guitar, right? Let’s cut the drifting and get to the Jeff Jarretting of the roster.

In another moment that absolutely should’ve been on NXT TakeOver: London, Sami Zayn is back. He’s been gone for 7 months, and in that time the entire landscape of NXT has changed. Kevin Owens took the NXT Championship from him, murked a few guys — Alex Riley, I’m looking in your direction — lost the belt in Japan and bailed. Most of the women’s division got called up to Raw. It’s a different world.

Here, he steps back into the ring to face Tye Dillinger, aka “El Hijo del CJ Parker.” The match is what it should be: a strong win for Sami, but not strong enough to overshadow what makes Sami so believable and popular. Wins are never really “easy” for Sami. He doesn’t show up, hit his moves and win. He struggles. He works through the match, takes punishment, learns, adapts. He gets hit and keeps moving forward. Even a guy like Dillinger can wreck him for a while, until Sami’s able to build up enough momentum and get his heart (and foot) in the right place. Sami’s the anti-Cena. The anti-Roman Reigns. Every match is a fight. It’s what makes him so much fun to watch, and why he can occasionally get beaten by a guy like Titus O’Neil without it “hurting” him. He’s a wrestler. Sometimes you win, sometimes you don’t. I’d rather root for a guy like that than hitch my wagon to the people I know win all the time. That’s just who I am. It’s why I root for the Cleveland Indians instead of the New York Yankees. Not that the Indians ever win, but you get what I’m saying.

I’m excited to see what 2016 holds for Zayn. I’m excited to see him step into this new world, and see how it’ll affect him. I hope he’s the guy that throws down the “Finn Bálor should wrestle me in a big match without painting himself up” card, because Sami’s the protagonist and can approach it from that POV, and also because Demon Bálor would murder him dead. How great would it be if they had that match, Zayn won, and “The Demon” snapped on him? A confrontation with Sami is the best time to go full-heel with Bálor, because at this point there’s no way you’re gonna put a babyface in the ring with Sami Zayn and have me choose them over him.

Maybe that’s Itami’s role. Maybe Sami will just be here for a few rehab months and pop up to Raw to join his Forever Enemy on the main roster. Whatever happens, I’m happy he’s back, and things feel okay again.