The Best And Worst Of WWF Monday Night Raw 12/23/96: Changes In Attitudes

Previously on the Best and Worst of WWF Monday Night Raw: Nitro is finally caught up, so we’re back! The last time we were here we were dealing the the fallout from In Your House: It’s Time, the possible paralysis of Billy Gunn, and Jerry Lawler getting homophobic and aggressive in response to losing a fighting action figure tournament.

You can watch this week’s episode here, and check all the episodes you may have missed at the Best and Worst of WWF Monday Night Raw tag page. Follow along with the competition here.

If you want us to keep doing retro reports, share them around! And be sure to drop down into our comments section to tell us what you think about Salvatore Sincere, or whatever.

And now, the vintage Best and Worst of WWF Monday Night Raw for December 23, 1996.

The first match of the show is an Intercontinental Championship match between the champion, Hunter Hearst Helmsley, and the challenger, ‘Wildman’ Marc Mero. If Helmsley is disqualified or gets counted-out, he loses the belt.

To catch you up, there are three stories happening here:

1. Sable defeated Jerry ‘The King’ Lawler in the finals of the Karate Fighters Tournament, and shoot tournaments involving toys are extremely important so there’s a lot of lingering animosity. WCW is a week out from Starrcade, but yeah, Raw is about an old man being pissed at a Barker Beauty for defeating him at toys.

2. Hunter tried to hook up with Marlena at In Your House: It’s Time and she turned him down, but making a pass at another man’s woman is the worst thing you can do in 1996 WWF, so Goldust must now stalk and brutally attack him at all times. This week he shows up to sit in the crowd and watch Helmsley’s match, and we get the great visual of Goldust and Marlena having gold light on them even when they’re just hanging out.

Note: Goldust is about to go full Frankenfurter here, look at him.

3. Hunter is about to become one of the most important people on the show, and Mero’s en route to becoming one of the great WWE characters of the 90s and 2000s, “guy with a hot significant other who can’t handle other people thinking she’s hot.” Also, a total footnote.

So we’re set up in a love/hate sexagon. Sextangle? I’m terrible at geometry, once I get to “pentagon” I start doing lucha taunts and forget what I’m doing. But yeah, Mero and Sable are married. Lawler hates Sable for beating him at toys, and hates Goldust for being “–” or how WWE Network censors “queer.” Sable used to be Hunter Hearst Helmsley’s valet, and now he wants Marlena, who is married (I think we’re supposed to know that) to Goldust.

The “if he gets counted-out or disqualified he loses the championship” thing is weird, because it only comes into play once, when H is about to hit Mero with the chair and is distracted by the announce team shouting stipulation reminders. Other than that, it’s a straight-up (and totally refreshing) win for Helmsley. Even with the outside distractions and weird stipulations! Mero goes for the Merosault and there’s no water in the pool, so H hooks him for one of those good, actual Pedigrees with the hands clasped — pay attention, every current wrestler — and pins him clean.

After the match, H is like, “HEY GOLDUST, I’M GONNA SHOW YOU WHAT A REAL MAN LOOKS LIKE, AND SHOW MARLENA WHAT IT’S LIKE TO BE A REAL MAN” before getting chased away. If that’s not the most Attitude Era combination of tropes, I don’t know what is. It just needs some nu metal behind it.

Last week’s main event, aka “Good Guy With A Gunn Stopping A Bad Guy With A Gunn,” ended with Bart Gun stun-gunning Billy Gunn and apparently paralyzing him. This week they do a sad recap of the moment with Bart on the phone, and they ruin it slash make it amazing by accidentally having the graphic of Bart make finger guns at Billy on a stretcher.

Up next is Rocky Maivia vs. Salvator Sincere. Sincere is basically what The Rock would’ve been if he’d never stopped being Rocky Maivia. The highlight of the match is right at the beginning, when Sincere ignores everything that’s happening during the introductions to make a Bitter Beer Face and make his boobies bounce. He does it for like half a minute. It’s so weird.

The story with Rock, as it has been, is that Sunny wants to f*ck him. That’s it. She shows up wearing a red dress that kinda looks like the world’s sexiest pillow case and a Santa hat, and spends the entire match on commentary talking about how handsome he is. That’s all there is to talk about, of course, because Rocky Maivia is cold boogers on a paper plate. Imagine Triple H vs. Marc Mero slowed down to 75% speed, and picture yourself making barf noises the whole time. That’s this match.

The good news: things eventually get much better for one of these three people.

They bring out Sycho Sid for a live in-ring interview, which is sorta like asking a dog to dunk a basketball. When he can’t remember what he’s supposed to say he inaudibly mumbles for a couple of sentences, then Band-Aids it with maniacal laughing. “AHHHM THE DUBYA DUBYA EFF CHAMPION AND THE RULER OF THE WORLD, SHAWN MICHAELS, YOU nomnomnomnomnomnomnomnomnom BWA HA HA HA HAAAA!”

It’s also kinda weird that they can’t decide who’s supposed to be the face and who’s supposed to be the heel in this feud, since they’re so adamant about defining the roles. Michaels was the beloved babyface champion, even though he wasn’t very beloved and everyone booed him when he lost. Sid was a heel, nearly killed an old man and used a camera to cheat and win the title, and got thunderously cheered. Michaels has spent the entire time since the loss backstage complaining about how great he is and how fans are stupid idiots who are just jealous, and Sid’s out here fist-bumping children. And still, Jim Ross is on commentary talking about what a horrible cheater he is. Seems like everyone in the main event scene is a total a-hole, right? We’re not very far from Bret Hart getting fussy about literally everything that happens, too.

One quick important note, though: unless I missed something over the past few weeks of shows, this interview is the birth of the “Attitude Era.” WWE’s going to define that by Austin 3:16 or some big moment, but this Sid interview is when they start dropping “attitude” as a buzzword. Check it out:

I love going back and finding those moments when WWE turns whatever’s organically happening into a corporate mandate. Wait until we get to that year or two when everyone on Raw couldn’t stop saying “ruthless aggression.”

Worst: WE HAVE LUCHADORES TOO, SHUT UP

By the winter of 1996, WCW had found lasting success by bringing in some of the top high-flying stars from AAA in Mexico (read: ECW, primarily) and showcasing them in spectacular matches on Nitro and pay-per-view. Stars like Rey Mysterio Jr., Psicosis, Juventud Guerrera and others were already becoming fan favorites, and would only continue to shine as ’90s wrestling’s boom period approached. WWF’s version of high-flyers was Billy Gunn doing legdrops and Marc Mero looking like he’s going to f*ck up and kill himself trying to do moonsaults and shooting star presses. So eventually WWF was like, “who else is in Mexico? Get them.”

This week we see the debut of Pierroth and Cibernetico, as they take on the extremely average, regular height-flying duo of Marty Jannetty and Al Snow. I’m pretty sure you don’t remember being a fan in the 90s and excitedly telling your friends about the dope Pierroth match you watched on Raw, so you now how it goes. The best part is the announce team protesting too much. “NOT EVERY WRESTLER FROM MEXICO IS A HIGH-FLYER, THAT’S A STEREOTYPE, THESE GUYS DOING HIPTOSSES AND JUMPING HEADBUTTS WHERE THEY BARELY LEAVE THE GROUND ARE JUST AS GOOD.”

After the match, Jim Ross interviews upcoming Royal Rumble competitor Mil Mascaras about the match they’ve just watched, and how special it is to wrestle in San Antonio. Mil responds with a promo he ran through Google translate twice. “And I’m expecting to give me the big support, and I’m expecting great in this match!” Vince immediately buries it by calling it, “another award-winning interview by J.R.”

Worst: Finally, The Honky Tonk Man Is Back

The main event is Bret Hart vs. Fake Razor Ramon, with the returning Honky Tonk Man on commentary. Are you in a coma? That sentence probably should’ve put you in a coma.

If you ever need a clear example of why the Razor Ramon gimmick didn’t work without Scott Hall, watch Rick Titan fail to get an entertaining five minutes out of Bret Hart. Bret could’ve gotten at least a two-star match out of a Hulk Hogan wrestling buddy, but not out of Razor. It’s so bad that they go to commercial break, then come back straight into the finish. They just cropped however much they wanted out of the match, possibly to avoid the Honky Tonk Man yelling over it, and got the hell out of dodge.

The closest thing there is to a highlight is the constant jumping backstage to Shawn Michaels, who eschews the traditional “stand with your shoulder to the TV” backstage watching position and just sits in a folding chair with his leg up: 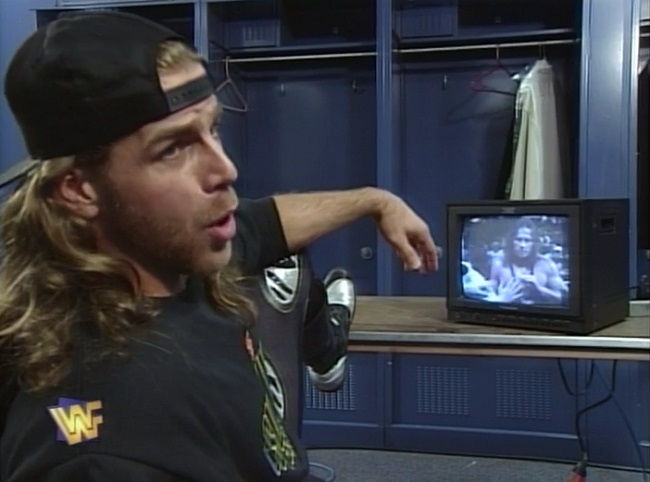 Shawn has lots of attitude and says that if he loses to Sid at the Royal Rumble, he’s going to lose like a man. Or, you know, he’s going to win, lose his smile and vacate the championship because he doesn’t want to give Bret his win back at WrestleMania. One of those two things.