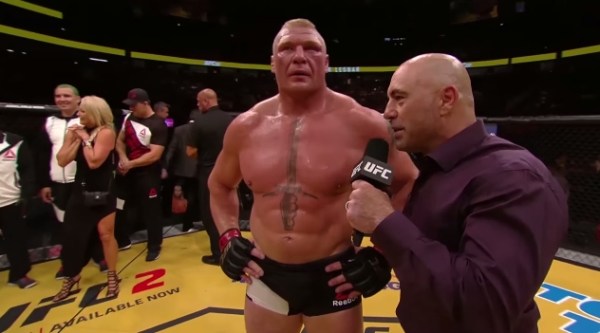 Both worlds of fighting (the fake one AND the real one!) are still reeling over the F5-level news that Brock Lesnar failed a drug test leading up to his victory over Mark Hunt at UFC 200. With a potential suspension from the UFC looming, the immediate question is how this will affect Brock Lesnar’s return to the squared circle against a returning Randy Orton at WWE SummerSlam. WWE’s response to that question was very … brief.

As reported by WrestlingInc.com, the New York Department of State also released their own statement, as pro wrestling still falls under the regulation of the New York Athletic Commission. Their answer was a bit longer than WWE’s, but somehow just as devoid of substance:

In 2002, New York State passed legislation that scaled back the regulation of “professional wrestling” in many respects based on a recognition that the activity is entertainment rather than bona-fide athletic competition. Under current New York State law, “professional wrestling” is defined as wrestling “primarily for the purpose of providing entertainment to spectators and which does not comprise a bona fide athletic contest or competition” (NY Unconsolidated Laws section 8928-b[1]). As such, the State does not license individual wrestlers, and Mr. Lesnar is not a licensee of the New York State Athletic Commission. In the context of “professional wrestling,” as defined above, the State licenses only the promoter, such as the WWE. Per New York law, among other health and safety requirements that apply to the licensing of a promoter, the event promoter is required to have a physician examine each wrestler and determine whether each wrestler is medically fit to participate.

The question of whether Mr. Lesnar is fit to participate in a “professional wrestling” event is one that will be determined by the application of the professional medical judgment of the examining physician, the policies of the WWE, and the choices made by Mr. Lesnar with regard to his own participation leading up to the event date.

So New York’s policy is leaving this in the hands of internal WWE executives and doctors. To put a polite spin on Mark Hunt’s recent opinions on the situation, this is all extraordinarily convenient for a company that seems extremely selective with how, when, and with whom they apply their wellness policy, as demonstrated with the recent, wonderfully-timed suspension of Roman Reigns. If nothing else, this summer has poked a lot of holes in the policies of a company insisting that it has cleaned the world of sports entertainment up for the better.