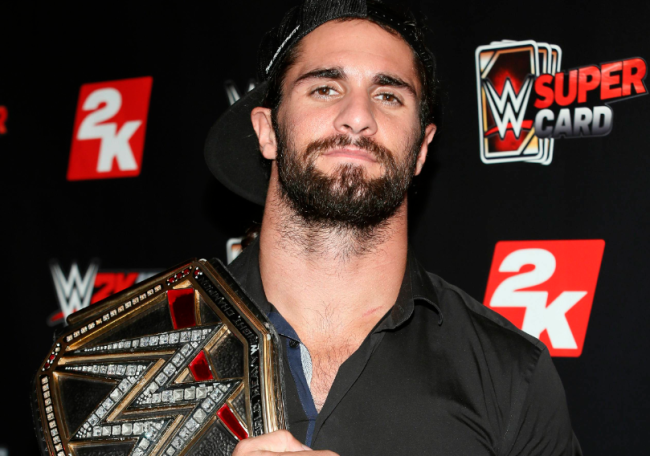 I have no problem proclaiming Seth Rollins as the most personally important WWE World Heavyweight Champion of the past decade. I mean, sure, the titles have only been unified for two years, and yeah okay that whole Daniel Bryan winning at WrestleMania XXX was an amazing and special thing, and yes, I know there’s still time to put it on Cesaro and trump all of these feelings, but guys. Guys, listen. How many WWE World Heavyweight Champions will take a break from answering the barrage of generic WWE interview questions to watch puppy videos with you on YouTube while making gleeful exclamations the whole time?

Well… okay probably a bunch of them, truth be told. But that’s exactly what Seth Rollins and I did a few days before SummerSlam. In between talking the mobile app game that I’m super bad at WWE Supercard, and the soon to be released WWE 2K16, Rollins took a break to watch a video of a dog learning how to jump on a mattress, and then tell me about his favorite dogs in WWE.

If you’re wondering if I stood in a media line for half an hour like a professional journalist just to talk about dogs with Seth Rollins, you are correct. If you’re also wondering if this is the last media event I’ll be allowed to attend, you… are probably also correct.

Our little Josie! She rides me like a camel! pic.twitter.com/cIlmX3w4

Rollins was also sure to mention that his favorite dog in the whole world is his own Yorkie, Kevin.

What’s that? Not convinced? Well, how about taking a gander at what happened when the conniving heel champ made an appearance on Today after WrestleMania:

We all know he’s WAY into CrossFit, something that usually makes him the butt of the joke for weightlifters and people who can’t do it, probably. But, hey, before you knock it, have you considered that CrossFit also apparently comes with rad dogs? I mean, based on his Instagram, I have no other choice but to believe this is an integral part of fitness:

Now, Seth Rollins is set to face beloved wrestling legend Sting at the next pay-per-view, Night of Champions. I know a lot of you love him, but I’m sorry, how much time does Sting spend hanging around with cool dogs and then posting pictures of them for me to make into a weird, moderately invasive, but ultimately adoring interview piece?