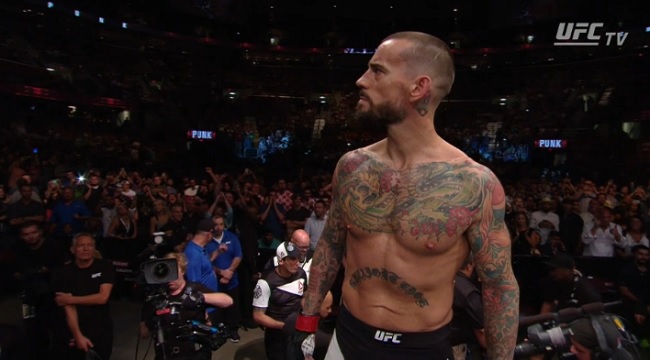 Punk made his grand entrance to his old WWE theme, “Cult of Personality,” to a mostly positive reaction from the Cleveland crowd. When the fight began, Gall immediately shot for a double-leg takedown and got in the guard. He rained down some big shots before taking Punk’s back and going for a choke several times. He threw some shots and Punk escaped one choke, but tapped out to a rear naked choke at 2:14 into the first round.

Punk was gracious in defeat, raising Gall’s hand before the official decision was announced. Gall improves to 3-0 as a pro and 2-0 in the UFC.

Punk left WWE on January 27, 2014, the night after the Royal Rumble. On December 6 of that year, he announced he had signed a multi-fight deal with UFC and began training in earnest — training that was chronicled in the four-part Evolution of Punk series that aired on FOX Sports 1 during the past month.

Punk suffered a shoulder injury in 2015 and underwent surgery for a herniated disc in his back this year before his fight against Gall was finally confirmed for UFC 203 … in the same Cleveland arena where his WWE career came to an end.