Did Roman Reigns Get Screwed Over At WrestleMania? 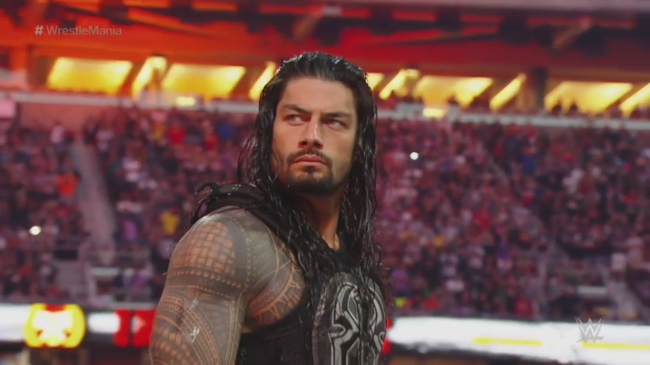 Did Roman Reigns get screwed over at Mania? According to the Wrestling Observer, a last minute change in plans left Reigns saying “I can, and I… wait, what?”

“Originally, the plan was for Reigns to win the title from Lesnar, however WWE reportedly changed those plans sometime in advance. The belief is that Lesnar was fully aware of the new plans before he signed his new deal with WWE last Tuesday.”

The Observer goes on to say that while the decision was made in advance, the actual notification came during that inescapable Rock-Ronda Rousey segment. Seth Rollins was pulled into a room with producers, Heyman, Lesnar, and Reigns where they dropped the bomb on both former Shield members. While it led to maybe one of the best main-events in WrestleMania history, it really grated the cheese of Roman’s family who were all there to see their favorite consistently damp relative win a title:

“Sika forgot this business is not real life, and was legit pissed at the finish and looking to start a war. A lot of the younger [family members] were rallying around Sika, but the other 45 or 50 of them talked some reason.”

WWE is known for making last-minute changes, and you sometimes have to fudge the situation in order to get the most authentic performances out of your workers. It’s shady, but it happens everywhere. The thing is, I wouldn’t want to piss off one legendary Samoan, let alone their FORTY TO FIFTY angry blood relatives.

I guess that could explain this clip of Rollins thanking Reigns during the finish of their WrestleMania match. And really, after that match, we should all be chipping in on one big gift basket of Snickers for ol’ Romey Reigns.