Friday Wrestling Conversation: What Do You Want Most From WWE 2K Video Games? 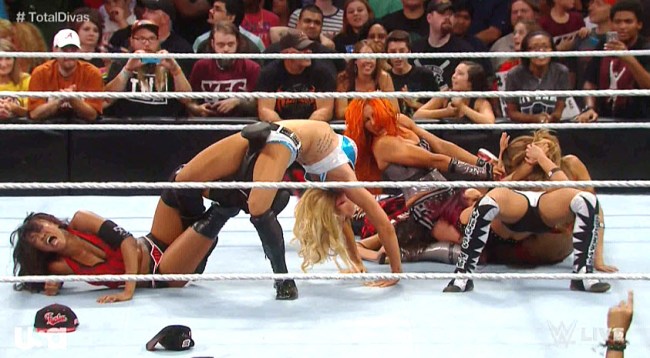 There’s been a lot of hubbub and grumpy faces over the exclusion of the Four Horsewomen from the upcoming WWE 2K16 video game. No, seriously, we like, just complained about it. While the excuses for not including them in either the game or as downloadable content later on down the road are mega weak, if you figure that it’s all directive from the top of WWE, the excuses become even more baffling.

So let’s ask this: If we’re looking to the future, what do you want from WWE 2K17? If the only hope we have right now is the possibility of finally being able to rip people’s arms off as Becky Lynch (sorry, other Divas, no intergender here!) in WWE 2K17, what else is on your wishlist, reasonable or not?

I think one of the most frustrating things for me was being given the chance to create badass female CAWs, and then… not really do much with them. Ooo, the most I can do is put them in a tornado tag, or a fatal four-way. Maybe I can add a cage. MAYBE. I love playing through Royal Rumbles with every inch of my wrestling game-loving heart, but I hate simming a boring tag match while Jerry Lawler’s pre-recorded commentary objectifies a vaguely human looking computer-rendered notion of breasts.

And where are the legacy characters? Can I get a goddamn Alundra Blayze up in this b-word? Even if you can’t reproduce Bull Nakano for any reason, give me something else to work with. How about a Molly Holly? Let me beat ass with Jazz. Seriously consider the history you’re trying to put over going forward. WWE is notorious for retconning their own actual real life past, but there are legitimately great wrestlers you can point to, even if their talents were no match for a sh*tty Stratusfaction or whatever.

I mean, I would love to go totally off the rails and say I also want to be able to have pets instead of managers, but I feel like we’re at the point where, if WWE wants to put over the idea that they have REAL LIVE WOMEN WRESTLERS now, they make it a part of their whole brand. As an aside, I will also accept pet dogs for WWE Superstars. Enzo and Cass carrying around a Shih Tzu named Hackensack that has a little leopard print bow in her ponytail? Am I accidentally shoehorning what I want in real life into a video game question? Haha, oops.

So what do you want? Does it involve damage bars? Do you want better taunts? Better menu music (yes)? More backstage fights where you throw someone into a pop machine and half of their body disappears (also yes)? Tell us in the comments below!