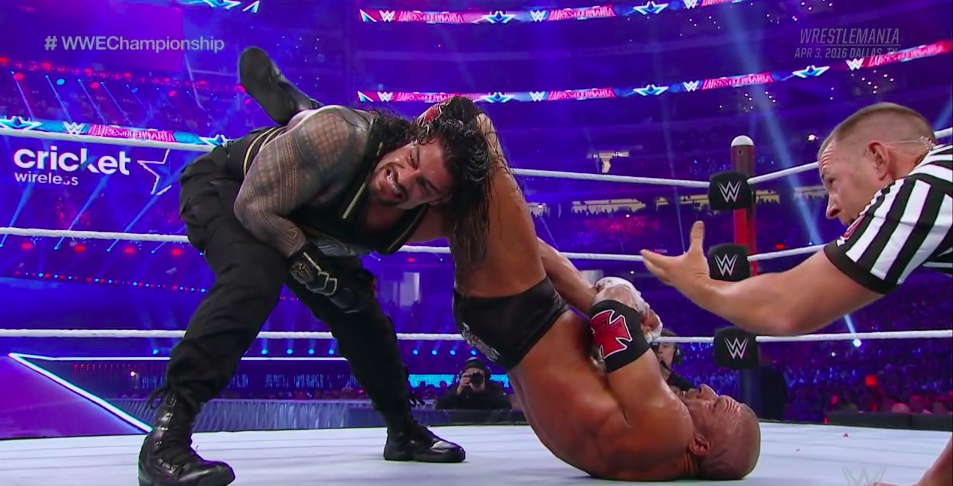 For as great of a wrestler as Triple H has been throughout his career, he’s had a shaky record when it comes to WrestleMania main events. While his match at WrestleMania 20 against Shawn Michaels and Chris Benoit is one of the best ever, he’s also had some memorably horrible main event matches. His match against Randy Orton at ‘Mania 25 is an all-time stinker. His match against Jericho at 18 wasn’t bad, but the crowd was dead for it after seeing Hogan and The Rock a few minutes earlier.

Sunday night’s match against Roman Reigns, though, stands up as one of the worst ever — up there with Sid vs. Undertaker, the aforementioned Hunter vs. Orton and Hogan vs. Sid.

Things were bad off the bat with the match coming after the crowd had been in their seats (or trying to get to their seats) for more than five hours.

This show is so long, does anyone really have the energy to even care that much what happens at this point in the main event?

The crowd has been there for over 6 hours. You would think you would try not to put them to sleep with this main event.

It was just hard to keep fans’ attention for that long. Especially with the psychology of the match being mat-based focus on Roman’s arm. Even a solid match would have had a hard time keeping the crowd captivated.

It was clear going into ‘Mania that the crowd would be booing Roman Reigns. WWE’s brilliant counter to the reaction was to pipe down the audio so the boos wouldn’t be as audible. This backfired because the crowd mostly sounded dead during the whole match. An energetic crowd is better than an apathetic crowd, which WWE should know by now. They gave us boredom instead. People who were at the event made it clear that there was something happening with the audio.

Am the only one noticing the #WrestleMania audio being messed with?

Are they affecting the audio to drown out booing? It dipped sharply right after the first note of Reigns' music. #WrestleMania

Overall, the match was lackluster. It didn’t have any surprises. It gave us the most predictable ending. It stunk. And the Internet noticed.

Would love to have heard backstage excusefest for that awful main. "Oh, that crowd wasn't gonna like anything"

I would've been happy with the @TheRock closing #wrestlemania this main event sucks.

WWE looks painfully in denial ignoring the deafening boos for Roman and cheers for HHH.

In the main event. Of Wrestlemania.

My thoughts on the #WrestleMania main event pic.twitter.com/OmCKXaU43z

This kinda feels like the last WrestleMania main event in Texas – Hunter vs. Orton snoozer at Reliant.

And now. A sociological experiment masquerading as a #WrestleMania main event.

The main event was so boring I dozed off at one point. #wrestlemania

I left the party I was at before the main event match was even over, that's how boring it was

Someone please save this match. Worst and most boring main event of #WrestleMania in a long time.

My opinion on WM32 was a 7/10 few great matches, terrible endings to most. And Main Event was completely horrible and a waste of time.

not the best wrestlemania by far, but not the worst. Brought down by terrible finishes and a main event that no-one wanted to see.

Hey, it could have been worse. Roman Reigns could have gone to spear someone and the show would have cut off before you know who he speared. But who would be dumb enough to do that?