Welcome to episode 23 of season two of the Over/Under of Lucha Underground, our gently reworded Best and Worst report about every episode of the best wrestling show on television. Only one more week until three weeks of Ultima Lucha Dos!

If you’d like to read about season one, you can find all of our previous episode reports on our Lucha Underground tag page. For season two, click here.

Shares, likes, comments and other social media things are appreciated. This show doesn’t have the built-in WWE audience behind it, so it needs your word of mouth. Tell @LuchaElRey that you read and love this column as well.

And now, the Over/Under on Lucha Underground season two, episode 23.

Over: MIL MUERTES V3, Or
Under: Mil Muertes Losing Immediately

Here’s a quick recap of the story for anyone choosing to jump in 23 episodes into season two.

Mil Muertes, a zombie given power by death after watching his family die under the rubble of the Mexico City Earthquake, is valeted by what is either Death itself, or a creepy teleporting ghost lady on some Melisandre sh*t. They were caught up in a feud with a Spanish businessman and his brother, a deformed gas station attendant hosting the soul of a God and living in a cage in the back of an underground fighting arena, over how to best run a supernatural wrestling promotion. That ended in a casket match, and on Lucha Underground if you get put into a casket, you are actually dead. Mil and Catrina lost that match. Catrina was fine, because she’s hyper-dead (or whatever), but Mil ended up stuffed and on display in a hunting-themed luchador’s trophy room.

You see, during Catrina’s time as the head honcho of the supernatural wrestling promotion, she dicked around King Cuerno (the aforementioned hunting-themed luchador) until he started looking for opportunities to f*ck her over. Collecting Mil’s dead body and taxidermy-ing it was the ultimate F*ck You. What he didn’t understand was that Catrina jogs down to the Underworld and retrieves Mil Muertes’ soul all the time, and every time she does it it makes him more powerful, so she brought him back to life in the display case and now Cuerno is f********cked.

Mil returned during the Six To Survive match to get his revenge on Cuerno, and this week’s show opens with them going one on one. You’d think they’d save that for Ultima Lucha Dos, but this is just a stepping stone to that, as annoying as WWE has made “do a match to promote the same match later.” Mil is batsh*t crazy and starts throwing weapons around when the referee gets knocked out, and Cuerno’s able to steal an incredibly, incredibly surprising win.

I didn’t like it at all at first, but I have two explanations:

1. Mil is enraged and insulted so deeply that he isn’t paying attention to the normal “destroy you and win the match” gameplan, it’s just “destroy,” and that loss of focus could allow a cunning-ass dude like Cuerno to win on a technicality (a rollup) plus cheating (holding the rope). Mil doesn’t really lose any momentum, because f*cker was DEAD a couple of weeks ago, and now he’s been cheated in a wrestling match and has even MORE reason to for-real end King Cuerno’s life.

2. Mil’s body is still full of plaster or whatever taxidermists use to stuff dead animals, so there’s gonna be an adjustment period. Joke aside, maybe Mil is still adjusting to his new power levels and doesn’t know how to control them yet? You don’t go from white eyes to red eyes without a grace period.

Catrina heads to Dario Cueto’s office to propose a solution to the cheating — a DEATH MATCH at Ultima Lucha Dos — in a segment that links together the pre-existing Dario and Catrina rivalry with Taya and Ivelisse’s, and with Ivelisse and Catrina’s. It’s great when a wrestling show can remember that all of its characters exist in the same universe at the same time, and can maintain multiple personal relationships on one linear path. Lucha does that better than anybody. Because, uh, they do it.

Note: pretty sure the implication here is that Catrina suggesting a death match gave Dario Cueto a boner. Which, I mean, it’s King Cuerno vs. Mil Muertes, can you blame the dude?

Speaking of Dario, my favorite non-dramatic part of the show is him announcing a four-way match for a Unique Opportunity (capitalized) at Ultima Lucha Dos. Cage, The Mack, Son of Havoc and Texano are all involved, and it’s named … well …

NEXT WEEK Son of Havoc, Texano, Cage & The Mack will kick off #UltimaLucha 4 A Unique Opportunity! #LuchaUnderground pic.twitter.com/ZGpAsE40zC

Dario’s joy in his own announcements is my favorite. He looks like he’s legitimately excited to announce ANYTHING to the Temple crowd, because he has ultimate confidence in his ideas and truly gets us. Also, he’s the Devil.

My favorite DRAMATIC part of the night is definitely the conclusion to Prince Puma vs. El Dragon Azteca Jr.

Actually, wait, before I get into that, the Pizza DDT — sorry, the “Dragon Tornado DDT” — remains the dopest move in wrestling:

Azteca nails Puma with a Dragon Tornado DDT and nearly gets the pin! #LuchaUnderground pic.twitter.com/GQxgMaFpjC

Okay, so, the match.

The story here is amazing, especially if you’ve been watching since the beginning. When Prince Puma started, he was a naive, understated guy who was infinitely talented, but never talked or made decisions for himself. He was sorta pushed around by his mentor, Konnan, and was mostly used to further Konnan’s goals. They did that to great success, with Puma becoming the first Lucha Underground Champion, but eventually Konnan got put in one of those death caskets we talked about and Puma was on his own. Mentorless Puma is still good, but he’s lacked direction. He floated around a little, got figuratively eaten up by Matanza in Aztec Warfare, and was sorta second-fiddle to Rey Mysterio in an INCREDIBLE Trios team that won, but couldn’t keep, the Trios Championships.

History’s repeating itself. El Dragon Azteca Jr., technically maybe the protagonist of the show as he was the first person to actually appear onscreen, is the new Puma. He’s naive, understated and ridiculously f*cking talented, but he doesn’t really make decisions for himself. He’s used to further Rey Mysterio’s goals — Aztec Warfare, the Trios Championship, and now a match with Prince Puma before the Mysterio/Puma match at Ultima Lucha. I think Puma sees and understands this, and is able to say, “hey, I’m not that kid anymore. I’M PRINCE F*CKING PUMA Y’ALL.”

That’s what the match is about. EDAJ holds his own, but he’s not Prince Puma. Puma keeps coming and appears to get stronger and more confident as the match goes on, to the point that when he finishes Dragon with the 630, he’s in Rey Mysterio’s face about it. It’s a level of disrespect we haven’t really seen from Puma before. This is the guy who punched through a punching bag because he was mad and sad. He’s becoming his own man now, for better or worse, and the teachings of Konnans couldn’t have all been tecnico.

I’m very excited to see where this goes. If there ever ends up being Lucha Underground without Prince Puma, I hope Dragon Azteca’s arc follows the same route, and we can pinpoint its true beginnings to this match. 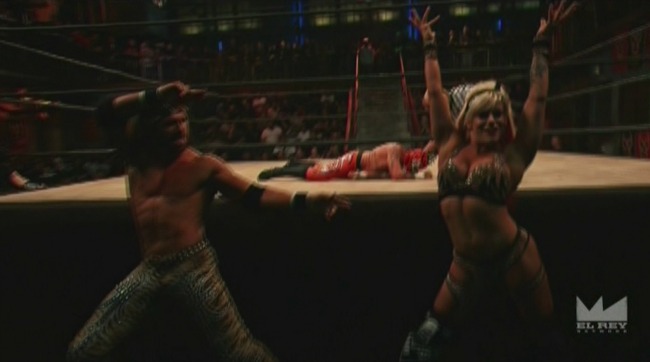 Over: Birdman Goes To Slamtown

The final match of the show is the best thing in wrestling, Johnny Mundo representing World Wide Underground, taking on the now de facto babyface workhorse star of the show, Fenix. It’s hard to believe these guys have never had a one-on-one match before.

If you haven’t picked up on it from the weeks of rampant dick-kicking, Mundo is a slimy rudo bastard. That’s the very simple story of this match, culminating in Mundo and Taya teaming up to hit Fenix in the face with Mundo’s Trios Championship belt, and stealing a win. That’s to set up a late-blooming barn-burner for Ultima Lucha: World Wide Underground defending the Trios Championship against Fenix and the cosmic nunchuck pals, Drago and Aerostar. It ties everything together perfectly. Drago and Aerostar continue their feud with Jack Evans and PJ Black, Fenix looks for revenge against Mundo, and Ivelisse is showing up as backup to help counter-balance her Ultima Lucha opponent, Taya. Lucha is like a puzzle put together by someone who is actually good at puzzles.

OVER: ULTIMA LUCHA DOS IS NEXT WEEK