NJPW Is Offering A Free Month Of New Japan World, So You Should Probably Sign Up Already

After Roman Reigns was kind enough to give us all a free month of the WWE Network, it seems that he was so strong it accidentally worked for New Japan World as well. 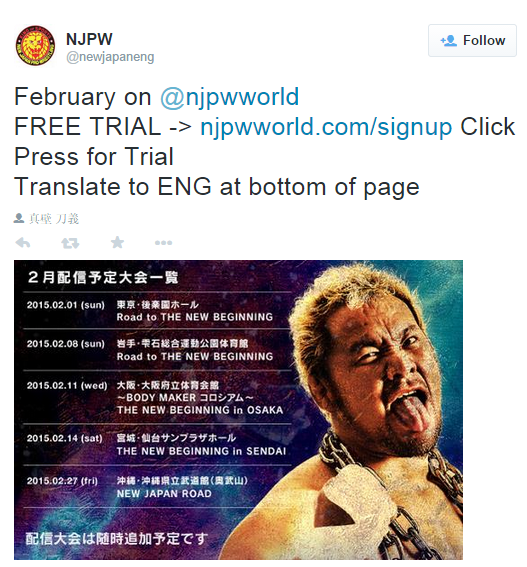 New Japan Pro Wrestling’s monthly subscription streaming service is offering the month of February for free, including their The New Beginning in Osaka iPPV. If you’ve been waiting to try to break into New Japan, a month of free matches throughout their history seems like a pretty good start.

It’s important to note that you are still required to input your credit card information, and it appears that you will be reimbursed for the month’s charge after February ends. If you decide you don’t want it after the month because you are crazypants bananas, you must remember to cancel it on the 27th (keeping in mind the time differences in Japan as well).

If the sheer existence and our constant fawning over New Japan stars isn’t enough, remember that this happened at The New Beginning In Osaka last year (and also Okada is also basically perfect):

Yeah. Yeah. You want in on that.