– You can watch this week’s episode here. All of our NXT content can be found here.

– Shares, likes, comments and other social-media things are appreciated. Support the show between the live specials!

Raise your hand if you thought I was going to love a Zack Ryder/Mojo Rawley team.

Pairing up Zack Ryder and Mojo Rawley is like pairing up cold sores and tooth decay. It’s like Creed going on tour with Nickelback. They became friends on social media and decided to form a tag team, causing Corey Graves to briefly become the Voice Of The Voiceless. “Riddick Bowe follows me on Twitter, that doesn’t mean we’re gonna make a run at the tag titles.”

They do a tandem “woo woo woo” on the Broski Boot, and Mojo does an MC Hammer dance before dropping a double ax-handle. The Mojo Family is back, too, so any response from the crowd will be measured and controlled by this weird line of people in matching T-shirts. At least they don’t have to make them by hand anymore. Mojo and Ryder defeat Mike Rallis and Elias Samson, and the post-match interview is about how they’re gonna go breakdance and score chicks.

Here’s the thing. This is probably a good idea. Mojo wasn’t doing anything, Zack Ryder is the king of not doing anything, and one promo where he calls Mojo his “NXT Rookie” would salvage the entire thing for me. NXT needs tag teams, especially tag teams with a personality, so good call. At the same time, holy sh*t does this team make me feel like Liz Lemon. They make me want to roll my eyes, shove an entire sandwich in my mouth and pass out on the couch watching Tootsie instead of being young and alive. They are such a f*cking hassle.

Here’s something we haven’t considered about Finn Bálor: What if his natural state IS the demon?

They show this cool little video of him in a suit (standing in The Matrix?) talking about embracing our inner demon, which is sorta unfair for him to say because some of us can’t just be OK being pissed off and turn into a giant eyeball with bat wings and an invulnerability to Tyler Breeze’s offense. But anyway, it’s the closest we’ve come to an attempt to show us Finn actually transforming into the Demon Bálor … we either see him as Normal Finn or The Demon with no in-between. I like the in-canon suggestion that he doesn’t paint himself up to play mind games, he just stands still and stares until he’s really mad and morphs into this weird Jamaican ninja monster.

What if that’s just who he is? What if “Finn Bálor” is the Demon Bálor’s statement on humanity? What if this monster from hell got really into New Japan and was like, “yep, that’s the flesh I’m using.”

Speaking of flesh somebody’s using, Tyler Breeze defeats Bull Dempsey by tricking him into running around the ring until he’s super tired, then nonchalantly lapping him, rolling him back into the ring and Beauty Shotting him.

You think it’s just a clever match finish, but later in the show William Regal’s backstage and Bull wanders in eating a bag of Doritos, and you go, “oooooh, they’re doing a Bull Dempsey’s fat and can’t stop eating thing.” A gimmick where Fat People Be Eating isn’t a fantastic idea, but it does continue Bull’s descent into being the lovable everyman. When he debuted, he was an unstoppable guy nobody believed was unstoppable, and all the embarrassing stuff about him was an accident. He got into the feud with Corbin and realized he was a fat fish in a big pond and it emasculated him. He realized he wasn’t a big deal or tough at all, and it 100 percent killed his momentum. He went from hard to beat to a total jobber, and the next step in that story is him completely giving up and just eating chips when he should be training. He is all of us. He’s the guy who had a dream and almost made it, but gave up when it got hard.

These segments go from Worst to Best based solely on the Heavyweights-style reveal that Bull stores food in his singlet. There’s no fat joke the entertainment industry loves more than a fat person having their food taken away, only for them to shrug and reveal additional food. They should reveal that Bull’s actually a 175-pound cruiserweight, he just looks fat because his kangaroo pouch singlet is full of fully-cooked, fully-garnished cheeseburgers.

How do you make Emma even MORE of a heel? By having her Emma Lock cult hero Blue Pants to death on Blue Pants’ birthday. That’s cold, Evil Emma.

Another quick note about Corey Graves, as he’s well on his way to becoming our generation’s Jesse “The Body” Ventura. He doesn’t have Jesse’s voice, but he’s hitting a lot of the same buttons … the thing about Jesse is that he wasn’t a “heel announcer” like Heenan, he was just a jerk realist. Jesse watched wrestling like a pessimistic, long-time wrestling fan might. He got frustrated, observed trends and formed opinions independent of how he was supposed to react. If Hogan cheated all the time and was a pedantic baby and nobody was supposed to notice, Jesse noticed. He’d side with the heels not because he’s “a bad guy,” but because sometimes the bad guys are right. He never felt like he was playing along.

Graves isn’t quite there yet, but he has the same thing going. He hates Mojo Rawley and Zack Ryder because they’re abrasive and annoying. He hated Becky Lynch when she was phony and called her out for it, but when she fixed her problems and “arrived” at Unstoppable, Graves changed his tune. He had a reason to, because sometimes all jerks need is a f*cking reason. He hates the irony of Blue Pants and doesn’t get why a lady wearing a specific color of pants has made her so popular. I love Blue Pants (and ironic wrestler love) so I don’t blindly agree with him, but he feels like an actual person who gives a crap about the show he’s watching and thinks things for reasons. That is REVOLUTIONARY in the world of modern WWE announcing. 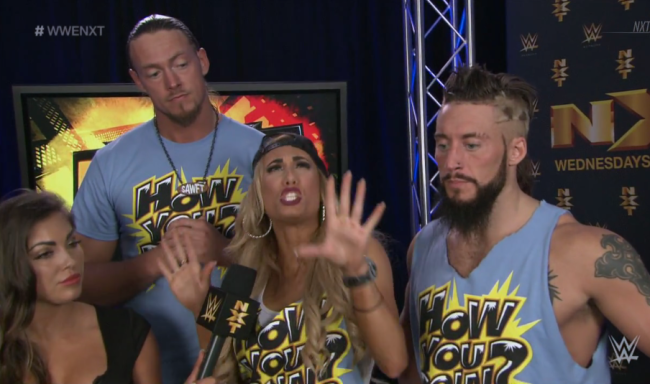 1. Nobody in this picture is looking at the same thing.

“Yeah, Alexa Bliss, a girl on fire. It’s like the Gamemaker just drops her into Unstoppable, pssh, came to ruin your day, Mockingjay. Well guess what, if this was the Hunger Games she wouldn’t last one night, aright, neither would the sweet boys, cause they got the life expectancy of a snowman in the sun. We rep our district like a barbell, OK?”

I love that they’re following up Becky Lynch’s TakeOver momentum by showing that she was empowered in her loss, and realizes that she finally has the vibe and the confidence she was looking for in those early days. The problem with Becky has never, ever been her in-ring work, she just needed a moment or a thing that made her a WWE Person Of Note, and not a frustratingly unformed but sparkly mold of nothing. Her being “steampunk-inspired” still doesn’t make any sense and her shirt’s terrible, but this version of Becky Lynch is DOPE, so let’s just make metal horns and hop around on one foot about it and see where it goes.

Now that she’s a defined “thing,” the Four Horsewomen concept in NXT is pretty perfect. Charlotte’s the updated classic, Sasha’s the spectacular new model, Becky’s the long-running Best In Show with a new coat of paint and Bayley’s our identifiable, dorky eyes into the universe. They should all get on the same page sometime soon and wreck all the new girls for sport. Forget the Four Horsemen, make them the MILLIONAIRE’S CLUB.

Graves calls her Jessie McKay, but when Jojo announces her to the crowd she’s just “Jessie.” Well, “Jess-sayyy.” Bayley never got a last name but Becky and Sasha did, and Charlotte has an in-universe one she doesn’t use, like when Goldberg dropped the “Bill” but was still Bill Goldberg. Man, one day they should build a story about revealing Bayley’s last name and drop that she’s actually “Bayley Guerrero” or something.

Anyway, if she’s going to just be “Jessie,” this should be her entrance theme.

Worst: Creepy Greg And The Homoerotic Backstage Segment Of The Week

Jason Jordan needs a tag team partner. Chad Gable is the guy he should pick, but he doesn’t like him so he keeps passing over him for partners who are going to fail. That’s a good, simple story to tell. For some reason the entire thing’s playing out like Swimfan for me, with Creepy Greg doing constant check-ups on this low-low-midcard guy’s quest for tag-team competency, and Chad Gable showing up with embroidered towels and sharpies to write his name on other peoples’ lockers. Like, I don’t know if Gable’s trying to tag with the guy or if he’s trying to f*ck and kill him. The way backstage segments have been going in NXT lately, it could seriously be either.

Worst: The Crowd Vs. Baron Corbin

NXT’s usually very good at understanding what does and doesn’t work in front of their crowd and changing things up on the fly. They took away Angelo Dawkins’ crummy backpacker gimmick, they’re working on Bull Dempsey’s character and on and on.

Baron Corbin’s not really doing anything wrong, but the crowd has turned on him. He’s just … not super exciting? That’s the best way I can put it. He has very normal WWE matches, and once they started going longer than 30 seconds the crowds got restless and refused them. They keep happening, though, and Corbin is still the “only unstoppable force in NXT” even though nobody’s into it and we’ve seen him lose. So, what are we doing, guys?

Play Toejam & Earl for the Sega Genesis. Pick any song from any stage and use that as Samoa Joe’s entrance theme. It’d be better than what you’re using now.

So Samoa Joe has his debut match on NXT against Scott Dawson, and hey, it’s Samoa Joe in a WWE ring! That’s a big deal. That deserves a Best.

Unfortunately I’m doing that thing where I’m not able to pretend wrestlers existed in oblivion and came in and out of the WWE Universe unchanged from our best perception of them, but it’s not 2005, and I’ve sat through many, many years of Samoa Joe not being an exciting or relevant thing — just tons and tons of terrible Joe matches and situations, from him attacking people with a machete in TNA on down. I want it to be 10 years ago, so I’m OK letting that sh*t go and getting exciting, but he kinda looks like Colonel Kurtz from Apocalypse Now and was seal-slippery by the end of the match.

Don’t get me wrong, Joe deserves this shot as much if not more than anybody, so I’m into it. I just want him to do something more than “GIT IN THE RING,” you know? It’ll happen. But like always, Kevin Owens is right … Joe’s debut match was nowhere near as exciting as Owens wrecking shop on CJ Parker. Maybe I’m just too aligned with Psycho Dad to see things straight.