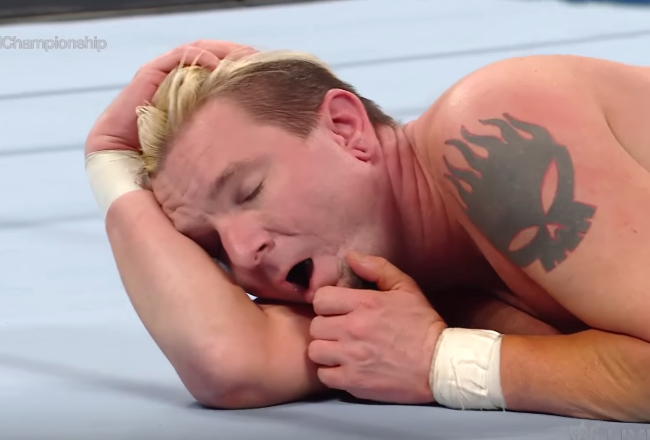 This week’s Smackdown Live suffers from a lot of the same problems other recent Smackdown Live episodes have had. That’s probably because they keep repeating the same segments from week to week. AJ Styles is wrestling James Ellsworth again, and wacky Dean Ambrose again shows up with his Groucho glasses to spray seltzer water all over it.  Another week of spooky shenanigans between Bray Wyatt and Randy Orton. And once again The Miz, Dolph Ziggler, Heath Slater, and Rhyno are the best thing on the show. As for the best thing from Smackdown that wasn’t on the show, take a look at this:

Why is Breezango not on Smackdown anymore? They were one of the highlights of the show before the draft. But ever since they were eliminated from the Tag Team Tournament, they’ve been relegated primarily to WWE’s YouTube channel. They have time for Curt Hawkins, but not Tyler Breeze? Geezango!

And now without further ado, here is The Best and Worst of Smackdown Live for October 18, 2016.

Worst: Bray Wyatt Is So Tired Of Feuding With Randy Orton, He’s Got To Lay Down

The first twenty minutes of this week’s Smackdown Live was yet another chapter in the meandering feud between Bray Wyatt and Randy Orton. It starts off with Randy Orton coming down to the ring and slowly reciting all the words he is supposed to remember while emoting as little emotion as possible. Randy explains what it’s like to be in a feud with Bray Wyatt and ends up describing exactly how I feel watching his feud with Bray Wyatt.

“Trying to escape his world is like trying to escape quicksand; the harder you fight the more you’re pulled down into the darkness, the more it feels like you’re suffocating. I feel like I’m losing my mind.”

His promo builds to an emotionless crescendo when Randy says, “I am Wrath, I am Vengeance, and I am coming for you,” with the same passion he would show when renewing his driver’s license at the DMV.

At the center of the segment is a match between Randy Orton and Luke Harper that I bet could have been really good if it hadn’t been smothered and covered in the greatest hits of spooky WWE characters. People disappearing, lights going on and off, caskets. You know the drill. It’s the same tired theatrics they always do, hiding a match that I would like to see happen without all the pyro and ballyhoo. Shortly after the match starts, the lights go out and here comes Bray sitting on a smoke machine inside a casket. Turn the lights back on Bray Wyatt, I’m trying to watch my wrestling.

Bray stays at ringside for the rest of the match, opening and closing the cover like a magician showing you that the box he is about to put his assistant in is just a regular old box. Then suddenly Bray opens the casket and low and behold Kane is inside. Sarcastic gasp. It’s fitting that Kane is present here because I would rather be set on fire than have to keep watching this.

Is it really playing mind games with someone if you’re doing the same tricks all the time? I’m a fan of the smoke and mirrors when it means something, when it’s part of an actual story that’s being told. But what’s the story here? Why is any of this happening? The whole thing ends with Wyatt and Harper teleporting out just as Orton and Kane are about to get the upper hand and hit their finishers. The best part of this is David Otunga trying to act surprised by the Wyatts disappearing.

This obviously isn’t a best, but it’s still way better than Orton wandering around backstage or Bray trapped in a storage locker.

Best: A Glower And A Grower

Thank god that segment with some of my favorite wrestlers is over so I can enjoy this match between a Funkadactyl and a cheerleader that WWE taught to wrestle.

Naomi vs. Alexa Bliss was a solid match, probably the best one-on-one match on this week’s show. I continue to really enjoy watching both of them work. There are little things that each one keeps adding in, week after week; they just keep getting better. I thought they did a great job of handling Bliss’ wardrobe malfunction toward the end of the match. They kept things moving forward without too much of an interruption.

While things keep getting better in the ring for the women of Smackdown, outside the ring, things are headed in a bad direction.

What did happen was Curt got on the mic and started getting into Apollo’s face, spewing out more of the stuff he’s been doing in those pre-taped promos. So, Apollo hit him with a right hand that sent Hawkins to the outside, where he got back on the mic and said that since Apollo ruined his debut, he wouldn’t be wrestling in the next match. He was leaving. So I guess we’ll have to wait to see Curt Hawkins beat Apollo Crews next week.

Worst: Where Do I Even Begin?

This was SO bad. Nikki Bella and Carmella’s confrontation was epically bad on so many levels. I’m not going to even get into how nuts it is that Nikki Bella’s instinct was to encourage the crowd to point at Carmella and chant, “shame.” But wow. Just wow.

Putting that aside, the segment is still a giant mess. The dialogue is horrific. It’s another classic case of WWE Creative writing two characters that are in the ring together, talking about similar things instead of actually listening and responding to each other. Maybe the bad dialogue is also to blame for why this storyline makes no sense to me. What exactly is Carmella exposing about Nikki Bella here? Why is Nikki Bella getting so upset?

If you’re going have Carmella confront Nikki about getting anything she wants because her boyfriend is John Cena, shouldn’t there have been some sort of example of her doing that, even if unintentionally? Carmella’s bringing this up seemingly out of the blue, and Nikki’s reaction to the whole thing is bizarre.

Eventually Carmella shows a video of footage from Total Bellas that’s been re-edited to make Nikki Bella look needy. The problem with this is that it doesn’t portray Nikki any differently that the commercials for Total Bellas and Total Divas that are already running during Smackdown Live. I don’t know what the mark was that WWE was trying to hit with this, but I know they missed it.

Best: But Then This Happens

How is this backstage segment where Renee Young interviews James Ellsworth made by the same people that just did whatever that thing was that happened between Nikki and Carmella? It blows my mind. This is downright heartwarming. It’s such a drastic switch in styles from one segment to another, that it kind of felt like a gut punch.

This made me really get James Ellsworth as a character. In four episodes, I feel like I understand more about who James Ellsworth is than after years of watching Nikki Bella. How is WWE storytelling’s success rate so uneven? Hell, I feel like Carmella was a richer character back when she had only made one appearance on NXT than the mess of a character she is today. Back then, she was a Staten Island hairdresser. Now I guess she’s a psychopath?

Best: Keeping Up The Good Work

The six man tag match pitting Dolph Ziggler, Heath Slater, and Rhyno vs. The Miz and The Spirit Squad was definitely my favorite part of this week’s show. All six of these guys keep making me happy week after week. They’re who keeps me alive through Bray Wyatt/Randy Orton segments.

The icing on the cake is that Kenny from The Spirit Squad pinned Heath Slater to give his team the victory, which means The Squad has to be sticking around at least for a little while.

The icing on top of the icing is that once again this week, Kenny found another completely unjustifiable reason to show off his abs.

Best: At Least She’s Not Fartin’

Best: Me, The Person

As one man shows off his abs, another hides his. Baron Corbin kept his shirt on for his match against Jack Swagger, and then totally destroyed him. It’s amazing what a simple thing like keeping your shirt on can do for you. It’s just such a better look for Corbin. There’s no reason in 2016 that Swagger should be getting any offense on Corbin. This was exactly the kind of match between the two of them that I wanted to see.

As shocked as David Otunga was earlier by the disappearance of The Wyatts, he finds it just as hard to believe that Swagger lost that easily. Otunga says he’s never seen Jack Swagger manhandled like that. He obviously hasn’t watched the last five years of Superstars or Main Event.

Worst: Once More With Less Feeling

Last week I was really on the face about AJ Styles/James Ellsworth. I wanted to love it. Ellsworth is a likable character and Styles is doing incredible work. It’s fun and different. But every time I’ve started to enjoy it, there was Dean Ambrose hitting me in the face with a cream pie.

This week, James Ellsworth is back to face AJ Styles one more time. This time, for the WWE Championship. And WWE decided just to do the exact same thing they did last week. And once again, I am torn.

This week, instead of being the special guest referee, Dean Ambrose just hangs around the match doing whatever odd jobs he wants, from ring announcer to time keeper. It’s all super weird because he’s not really doing anything to help Ellsworth. He’s just kind of creating chaos. There’s even a point in the match where AJ Styles throws Ellsworth to the outside, and Ambrose throws him right back in. It turns into a comedy bit where Ambrose and Styles each take turns throwing Ellsworth in and out of the ring.

Why even bother having that emotional moment earlier in the show while backstage with Renee Young if Ellsworth is just going to end up being a prop to get a laugh with? In the end, Ambrose not only doesn’t help Ellsworth, he gets him badly beaten. Ambrose taunts Styles to beat Ellsworth more and more until AJ is disqualified. If the whole goal of this was just to get Styles disqualified, I’m sure he could figure out a way to do it without getting this poor guy’s head beat in.

I’m supposed to be cheering for Ambrose? Why would I ever do that?

After the show on Talking Smack, AJ Styles confronts Daniel Bryan and demands a match next week against Ambrose. Who’s the good guy here? The WWE has made me want to see AJ Styles beat Ambrose next week. Not because I’m a smark and AJ’s from New Japan, or because he’s an internet darling, or anything like that. It’s because of WWE’s own storytelling.

If they sell enough of those James Ellsworth t-shirts, I’m sure he’ll be the special guest referee in next week’s Ambrose/Styles match. I could even see all three of them in a triple threat for the week after that.

I’m Justin Donaldson, and until next week, shame on you WWE Creative. Shame.