The FBI Is Now Involved With The Hulk Hogan Sex Tape. Yes, Really. 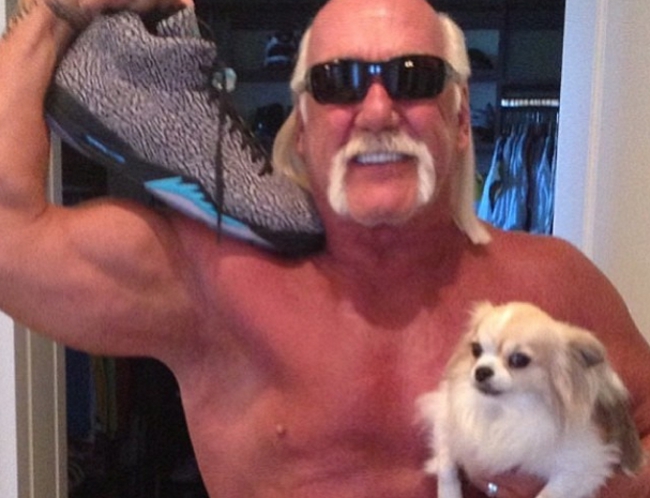 The dog, however, is not involved.

When I sat down to write this, I ended up discarding a few wordy introductions. Lots of the dry, “nothing really matters anyway” humor that I lean on too heavily met the cruel fate of the backspace key. Instead, I figured I should just get through this painlessly as possible, for the sake of your sanity and mine.

Yes, there was a Hulk Hogan sex tape a few years back. Nothing we do will ever change that. We’re now learning that the story is about to get even weirder, because the FBI has now been dragged into it. Yes, the Federal Bureau of Investigation, America’s highest bastion of intelligence, is now wrapped up in litigation concerning the Hulkster’s dong. Try not to think of the word “leathery.” (You just thought of it, didn’t you? Oh God, I’m so sorry.)

Basically, Gawker Media is lawyering up to prepare for the $100 million lawsuit that Hulk Hogan filed in 2012 after the sex tape went public. By suing the FBI, they hope to get possession of documents pertaining to the subsequent investigation of the tape. Gawker’s hope is that the records, initially requested under the Freedom of Information Act, can then be used in their legal defense. I have to wonder, does the FBI usually make inquiries into sex tapes, or just the ones involving guys old enough to be grandfathers? Is there an entire Gross Sex Tapes division? I bet there is.

AGENT JOHNSON: So, you’ve reviewed the evidence, correct?
AGENT WANG: Correct, and my soul promptly left my body, so thanks for that.
JOHNSON: Anytime. To recap, Hogan (who was married at the time) was filmed having sex with the wife of radio shock jock Bubba the Love Sponge. The footage indicates that Mr. Love Sponge was present at the time. Hogan claims he was unaware that he was being filmed, but Gawker asserts otherwise.
WANG: I used to work homicide, and this is still the most nauseous I’ve been on the job.
JOHNSON: Relax, kid. You know, the boys in forensics have a theory that the tape syncs up with Hogan’s entrance music.
WANG: Fine, I suppose that’s worth a look.
[Johnson rewinds the tape.]
AUDIO: “WHEN IT COMES CRASHING DOWN AND IT HURTS INSIDE!”
WANG: I bet this is why TNA is going under.
JOHNSON: What the hell is TNA?

You know, in these trying times, we could use a special kind of law-enforcement agent. Someone who goes above and beyond the call of duty. A true supercop, relentless in the pursuit of dick-related justice. I think I know just the guy.