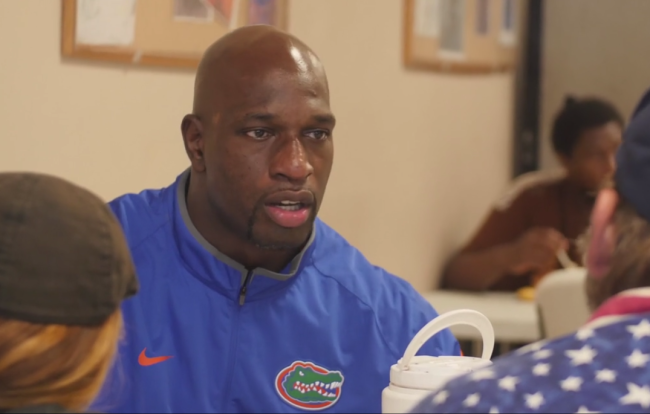 Titus O’Neil once again cemented his Certified Best Dude™ status last week. The WWE Superstar teamed up with his alma mater’s charitable organization The Gator Good (like greater good, but with a gator because they’re the Florida Gators, y’see?) and volunteered at St. Francis House, a Gainesville homeless shelter. There, he talked with residents and helped out with their three-meal-a-day food program:

“It’s not even being a former Gator, it’s just me doing me. As a person who’s lived through all of that, hopefully I can give a voice good enough or loud enough that’ll help encourage people to go and do the same thing.”

St. Francis House is an emergency shelter that also provides transitional and permanent housing. They also offer transitional housing for single women with children, job placement assistance, and can nearly double their capacity during inclement weather.

This isn’t the first time O’Neil has used his voice and his platform to help the homeless. Back in August, O’Neil tried to take two homeless people for a meal at a San Diego Yard House restaurant, which the restaurant manager was less than thrilled with. O’Neil, who is outspoken in his belief that all people should be treated equally and with compassion regardless of their status, responded by returning the next day with an even larger group of people.