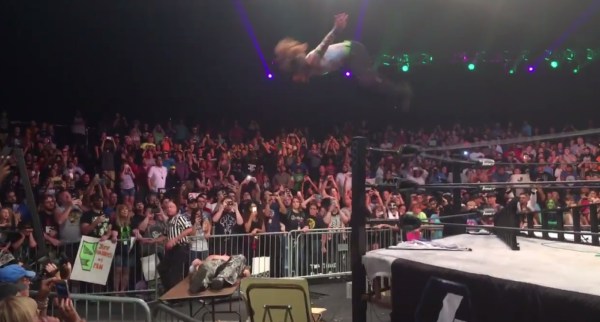 1. X-Division Championship Match: Eddie Edwards defeated Trevor Lee (c), DJ Zema, and Andrew Everett by pinfall. Lee and Everett’s manager Gregory Helms was ejected from ringside prior to the match. Towards the end of the match, Lee and Everett began having disagreements. Lee went for the kill, but Edwards was able to roll him up for the pin and his first singles title in TNA.

2. The Tribunal defeated Mahabali Shera & Grado by pinfall. Al Snow’s clients (the former Sylvester Le Fort and Marcus Louis) were able to dispatch Shera and Grado, who played their standard role of comedy babyface underdogs. The announcers suggested the Tribunal might have their sights on the tag titles next.

3. TNA Knockouts Championship Match: Sienna defeated Jade (c) and Gail Kim by pinfall. Maria Kanellis was unable to compete due to a broken hand, so her scheduled match with Gail Kim was off. Kim demanded Kanellis get in the ring, because she deserves a match. Billy Corgan agreed that the fans deserved something special for Slammiversary, so he made he added Kim to the scheduled Knockouts Championship match between Jade and Sienna.

Kim looked to have the match won when Allie (the former Cherry Bomb) and Maria took her out of action. With the referee distracted, Jade’s former Dollhouse partner, Marti Bell, slid in the ring and clocked Jade with a foreign object, allowing Sienna to become the new Knockouts champ.

4. James Storm defeated Braxton Sutter by pinfall. Storm came out and said he wanted to give someone an opportunity, so he called out Sutter (the former Pepper Parks) for a match. Storm won the Respect Match with the Last Call. Both men celebrated with beers afterwards.

5. King of the Mountain Championship Match: Eli Drake (c) defeated Bram by pinfall. This was perhaps a surprisingly short match. Drake retained after a clothesline.

6. Ethan Carter III defeated Mike Bennett by pinfall. Bennett hit a sitout modified Michinoku Driver on a steel chair while the referee was removing Maria from ringside, but EC3 kicked out. Carter then hit a TKO on a chair and the One Percenter for the win.

7. Full Metal Mayhem Match: Jeff Hardy defeated Matt Hardy by pinfall. Jeff finally managed to set Matt up on two tables outside the ring, then hit a Swanton off the top rope to the outside, putting Matt through the tables for the pin.

9. Knockout Or Tapout Only Match for the TNA World Heavyweight Championship: Bobby Lashly defeated Drew Galloway (c) by submission. Galloway cut an awesome promo before the match saying that he’s not ready to give up his title and that he got Kurt Angle to tap out, so he can definitely beat Bobby Lashley. Galloway bled during the match. He went for the kill and Lashly dropped him with a right hand, then sunk in a head and arm choke and Galloway passed out, so the referee awarded the match and the title to Lashley.