Well! Total Divas is back, and this certainly is a thing I’m doing now. The previous recapper — our much-beloved Burnsy — has graciously handed the reigns over to me. And by ‘graciously handed,’ I mean ‘aggressively thrown them at me before running full speed in the opposite direction.’

If you want to catch up on what you missed during the finale, you can read Burnsy’s farewell recap here. We’re a week behind, so we’ll do a quick recaplet before we get into this week. And trust me, the show is so much more ridiculous when you say this stuff out loud.

Eva Marie has been sent to California to train for six weeks with former WWE wrestler and current ‘guy on those shows where they smoke pot in the ring’ Brian Kendrick. The girls get wind of this, and, entirely convinced that she told them she was going to train in NXT, get all up in arms that she’s being given preferential treatment. Nikki and Brie are set on leaving WWE, yet furious that WWE would be putting time and effort into someone who could (lol) step into the role they’re adamant they leave behind. Alicia Fox is shady as hell, and it’s great.

Eva returns to address the Divas who are mad that she has been terrible with zero effort for so long, while they live and breathe the division. Brie is especially mad, which is odd because the other half of her story this week is how much she wants to stop wrestling and have little baby Bryans. The only person who comes out looking great last week is Cameron, but mostly because she’s onscreen for about ten seconds saying she wants no part in any of this. Because of that, she rockets into first place in this week’s…

1) Cameron – Barely on screen, completely forgettable. You go girl.
2) Alicia Fox – “It’s not talking shit, it’s comparing notes.” I would subscribe to her newsletter.
3) Paige – Because I can’t just “and the rest!” between this spot and Nattie.
4) Nikki – She decides to stay and revolutionize the Diva’s division. Eh, okay sure.
5) Naomi – She’s barely there, but when she is she’s mostly stirring up the drama.
6) Eva Marie – Hey, at least she’s trying.
7) Brie – Babies! Wrestling! My Sister! My Daughter!
8) Nattie – I am uncomfortable with literally everything she does.

This week on Total Divas, the best wrestler in the world jerks off, and Alicia Fox has shit to do.

The show picks up where we left off, with all of the Divas huddled in catering telling Eva Marie off. Naomi thinks it was super crummy of them to all gang up on her, and Alicia Fox is having none of it. She walks off in the middle of an impassioned explanation by Naomi because she doesn’t care, and she ‘has shit to do.’ I have never identified so strongly with a reality show personality in my life.

Paige and Brie are at the airport, and with very little (no) segue, Brie starts talking about the gown she’ll wear to the Hall of Fame ceremony. Paige didn’t know it was black tie, and is extremely dismayed as she’s never owned a gown before. Brie suggests that Fox help her pick one out because she has great style. Goddamnit, Brie, that lady has shit to do, try to keep up.

Brian Kendrick accidentally calls out WWE’s terrible view of Divas, and the repercussions of operating in a male-dominated industry when Eva tries to complain about how she was treated by the other Divas. He says there are only four spots for women onscreen at a time, and for WWE to see something they want in Eva, it makes the others want to try to get in her head, whether they realize it or not. Male-dominated industries (so…um…like all of them) create this subconscious competition between women by making them feel like there’s only one spot and one role to be filled. It’s terrible, especially when it leds to that ‘one of the boys’ mindset that manifests in internalized misogyny instead of fighting against the system that holds everyone else down. That said, it’s very odd to hear an abridged version of that come from the guy who works for f*cking Hoodslam, y’know? He also responds to her recap of events by saying “who cares?” Who indeed, Brian. Who indeed.

The Bellas’ preferential order of things that could be happening in your lower half are: 1) baby, 2) diarrhea, 3) your period. I would quite frankly prefer none of those ever, but celebrities! They’re just like us, except when they’re super duper not. Brie is ecstatic that she’s missed her period, because she wants nothing more than to have a baby and yell at people who don’t make wrestling their top priority. Unfortunately it’s not to be, leading her to get all cryfaced about not being pregnant. You know, I’ve seen this show referred to as a gateway for ‘getting your girlfriend to watch wrestling’ a lot, but if I’m gonna watch an intense period piece, it better start with “The Bletchley” and end in “Circle.” Later, the twins and their mother have a nice, hearty family discussion about how Brie could possibly be infertile, and Daniel Bryan could be as well because wrestlers get kicked in the nuts a lot. I…am unsure as to whether or not either of the Bellas understand pro wrestling or fertility at this point. 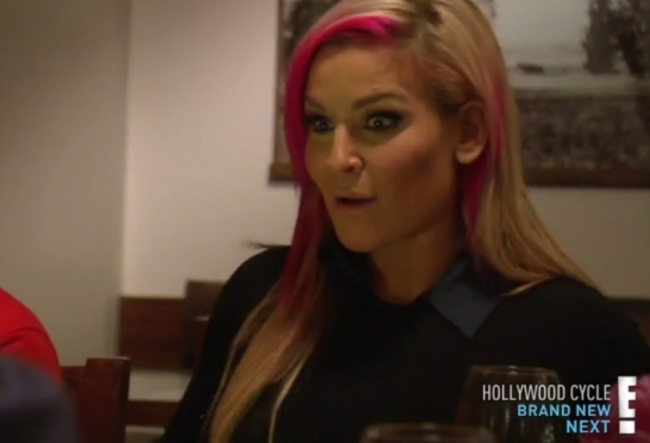 “F*ck the blood pressure medication, who gives a shit.” Ah, yes. Just when we were starting to feel sympathy for Natalya, she drops that little gem. See, WWE has give up the ghost on pretending Nattie’s dad is Bret Hart, and invited Jim Neidhart to WrestleMania weekend, and AXXESS would feature the first father-daughter signing. That is, if Jim can keep it together. He’s just been kicked out of rehab, and is now trying to bail on the WWE events. Wearing white during your period and crankin’ it while a camera crew listens outside pale in comparison to the sad realities of dealing with addiction, and it’s hard to hate even the least charismatic person involved in WWE when you see that struggle. But um…honey…I think out of everything, that blood pressure medication is probably super important.

Natalya has dinner with her other dad Bret, and comes to the conclusion that she can’t micromanage his drinking or pills, and if he falls down, he falls down. She’s in a ‘landfield of ticking timebombs.’ Everyone at the table clinks their wineglasses, happy to have put the issue of a family member’s addiction behind them, because this show might be one of the worst things I’ve ever seen. Later, Jim makes the signing, gets to hear a lot of people tell them how much they love him, and another landfield has been avoided.

All of the stories on the show this week are loosely tied together by the idea that, despite everyone trying to act as inhuman as possible, what they do matters to people, and changes people’s lives. A lady in line tells Neidhart that he and Bret are the reason she loves wrestling. Daniel Bryan is asked to present a posthumous award to Connor Michalek. Eva Marie lays in bed watching a video of her with bunch of sick kids, which gives her the opportunity to snipe that some of these kids are dying, and they still have a better attitude than half of the locker room. Be worse, Eva Marie.

Alicia Fox has made Paige’s gown shopping her shit to do, and after forcing her to get a spray tan, she takes her out into the city to forage for formal wear. Paige abandons Fox in a shoe store, and is immediately met with a crying fan who tells her that she helped her through her eating disorder, and her not caring about what other people thought about her was what got her through. Fan at AXXESS laud Paige for being so different, and she proudly proclaims in an interview that she’ll be wearing Doc Martins with her gown to the Hall of Fame ceremony.

Tune in next week when Cameron triumphantly heals a deaf child by playing Girl Bye on repeat.

1) Cameron – Does not appear, is the best one by default.
2) Paige – While the adulation may be saccharine at best, she’s really the best one. Pale girl solidarity 4 lyfe.
3) Alicia Fox – She’s got shit to do, like maybe be my new best friend
4) Naomi – She doesn’t want people to fight or be jealous. Hopefully she’ll make it through the season without disappearing in a mysterious boating accident, only to be replaced by, I dunno…Heath Slater. (wait do that)
5) Nikki – She’s the only one who doesn’t get a ‘reason for the season’ moment, which oddly makes me like her more.
6) Eva Marie – Well…at least she distracted some sick kids from their misery for a few hours.
7) Brie – If Nattie didn’t constantly refer to her parents as Mommy and Daddy, Brie would be at the bottom faster than a mob snitch with cement shoes.
8) Nattie – I am uncomfortable with literally everything she does.