‘Total Divas’ Recap: Bigger And Total-er And Diva-er Than Ever

Hey, Total Divas is back for another season! Tentative hooray! Be sure to share this with all of your friends who are just as excited to see what these ladies are gonna get up to this season by using these handy-dandy share buttons:

Here’s what you need to know from last season: nothing. Literally nothing. The odds of anything staying consistent this season are incredibly slim. But, for the curious, we left off with Paige getting engaged (engaiged?) to Easily Recast-able White Guy With A Beard #7, and Dolph Ziggler revealing that he still has feelings (figglers?) for Nikki Bella and tried to kiss her right on her face where her kissing lips live. The ladies went to Mexico where Paige revealed that she doesn’t actually want to get married, and Natalya reveals that TJ loves Cesaro more than her. Whoa, same. Everyone hates Eva Marie despite her husband being able to eat an entire chicken. Naomi’s story arcs don’t really matter since she seems really nice, and there’s no room for that so she’s been replaced this season with a blonde lady who probably can’t tell the Usos apart. Also same. Here’s a helpful video recap of Nattie throughout season four. Brie still wants a baby, but also wants to wrestle, yet the incredibly obvious solution of her wrestling a baby never comes up. Cameron was there once or twice? Yeah, that seems like all of the important stuff.

This is what the show The Slap was about, right? You know, I’m not entirely sure that show was every actually real. I mean, as real as this moment the E! and WWE cameras were able to conveniently catch. Nikki tells us she doesn’t want any drama in the workplace, so she immediately runs to tell her sister, then Paige, but very specifically not Nattie because she’s the worst. Needless to say, everyone is shocked: 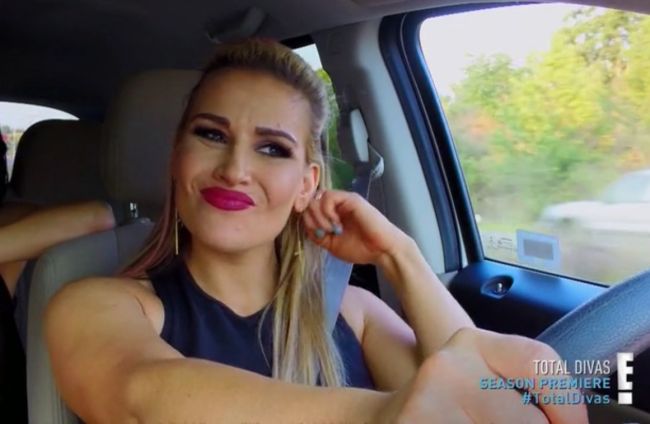 Speaking of Nattie, within her first 10 seconds onscreen, she cuts a lady off, takes her hands off of the wheel to demonstrate that the lady gave her the Stone Cold double fingers, has a sneezing fit, then starts wondering if she’s awful for going to work while Tyson Kidd is home with a broken neck. If you thought she was going to get a season five repackage, hahaha NOPE. This lady is already a rollercoaster in less time than it takes for Brie to bring up her aching womb. We then get a nicely shoehorned-in talking head informing us that we’re in the midst of a ‘Divas Revolution,’ so if you also thought we could just leave that to Sasha Banks, haha, NOPE. I know it seems like we’re going real hard on her right off the bat, but her next scene shows her offering her father ‘a coffee or bottle of vodka.’ If you’re just jumping in now, her father’s alcohol and substance abuse issues were a major plot point in the previous season, so that’s pretty chill.

Nikki still hasn’t told Cena about Dolph trying to wife her up behind his tour bus, and Paige is waiting until she gets home from Japan to tell her bearded mannequin of a fiance that she he shouldn’t have put a ring on it. This should go well for everyone, right?

The great thing about all of the drama happening right now is that it gets to play out in Japan, where a normal phone conversation turns into facetiming from a cat cafe, or making fun of Nikki Bella while everyone has their feet stuck in tiny pools of tiny fish. Total Divas is completely bananas and I think….I think I’m all in on it? I hate it, I really do, but also Nikki talking about John Cena’s Twitter account while Dolph Ziggler’s feet get manicured by tiny Japanese aesthetician fish (I assume) might be a highlight of my week? Like what is even happening here:

Back at the ranch, Brie is trying to help Daniel Bryan fill his time and help think about a career outside of wrestling. Good to know that Brie is going to continue being the bad guy in this season as well. If you were wondering what he’s been up to during his time off, much like my mother now that’s reached her fifties, Bryan’s getting way into making jams and jellies. I really want to see him wrestle again before WrestleMania, but I also selfishly want an intense subplot about him discovering the joys of pickling things. Who cares about who’s trying to trying to kiss someone else’s girlfriend, D-Bry’s trying out a new Bread and Butter recipe!

Anyways, I would hate for things to go south when her gentle bearded manfriend supports her so much that he got a Dolph Ziggler tattoo:

Speaking of, it’s time for Nikki to break the news to John about Zigs offering to give her a million babies because John never will. As an aside, she’s wearing this sassy little Diane Von Furstenberg romper that also kinda makes me want to propose to her, if only so I can borrow it whenever I want:

Amazing that someone with a preternatural instinct for choosing baller romper and jumpsuits is being courted by a guy who takes his neon shirts off weird and another who wears a denim vest under his leather vest: 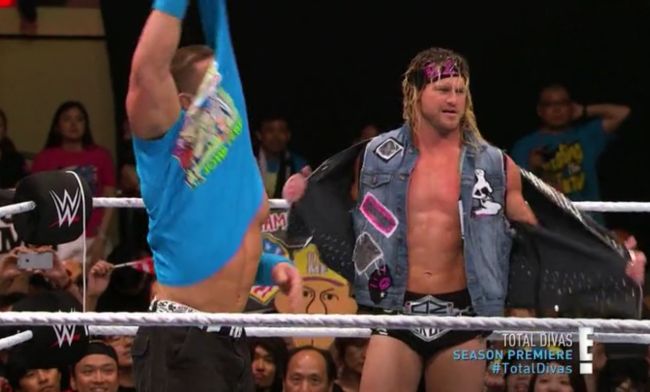 The clip above cuts off after John says things are about to get interesting, aaaaaaand they do not. He tells her she’s a grown woman, and if she still has feelings then he’d be stupid to try to stop her. Nikki is nonplussed by the tepid response, expecting him to get mad, or at the very least throw some bread. This feels like a pretty lackluster ending, but I can only assume this isn’t the last we’ll hear of this. At the very least, I hope to god we get to see Nikki’s dramatic reactions to that one scene in Trainwreck.

Our fairest Burnsy used to rank each Diva during his time in the Total Divas trenches, but it got mega-redundant once Nattie moved permanently into the basement. Usually I end up taking a million screencaps I don’t use, but still crack my shit up nonetheless. It’s a shame, because at heart this show is really entertaining, but when you say what happens out loud in no way does that come across. As such, here are my Top Five Out Of Context Screenshots for this episode. This week features multiple variations on Daniel Bryan’s incredible thousand-yard stare: 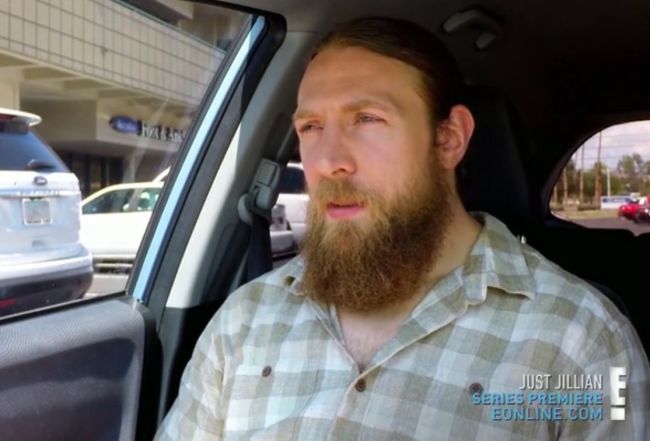 Total Divas, this season on E!