Hey Total Divas fans! Thanks for coming back for a second week to the leading Total Divas recap that primarily focuses on embarrassing screencaps and wondering where Eva Marie’s husband is. I guess we tell you what happens on the show as well, but seriously, where’s Jonathan and why isn’t he eating a entire suckling pig to himself for half of this episode?

Be sure to catch up with what went down on last week’s season premiere here. When you’re done this week, be sure to share this column around using these buttons that will plaster it all over all of your ‘social medias.’ All of them.

This week on Total Divas: Nobody wants to kiss Nattie, John Cena doesn’t want babies, and Cesaro appears briefly and makes everything worth it. Doesn’t he always, though?

This episode is very Nattie-centric, so I’m going to go through her stuff first, if not just to get it out of the way. It’s fine! Don’t worry. It’s just like ripping off a Band-Aid, except that Band-Aid really loves being weird and inappropriate about her father’s alcoholism.

Last season, I wrote about the one genuine moment of empathy to be found in regards to Nattie:

Natalya’s someone who was always caught in between. Her and Beth Phoenix were supposed to be the REAL WRESTLERS out of the bunch, but they were never quite the look WWE wanted for one side, and never quite the wrestling juggernauts people like to pretend that they were. Now she’s stuck watching all of these girls get proper training and focus and attention while she tries to chime in and identify with an experience she didn’t get to have even though she also was literally born to do this, while operating in a Total Divas universe that she doesn’t fit into at all. She’s a square peg, and all the holes are the wrong shape.

This season, and specifically this episode, we find Nattie torn between dutifully staying with her husband while he recovers from career-threatening neck surgery (all the rage in WWE these days), and being a part of the “Divas Revolution.” TJ encourages her to go back on the road, presumably so he can spend more time alone with tag team partner, best friend, and obvious soulmate Cesaro:

After TJ and Cesaro make platonic bro heart eyes at each other, Nat pulls Cesaro aside to vent her frustrations. She admits her fear that taking time off to help TJ recuperate will put too much distance between her and the Divas Division, and they’ll forget about her. Of all the totally real things said privately in front of these reality show cameras, that’s about as spot on as it gets, right? Brie Bella can moan about her aching womb and fear of Daniel Bryan never being a whole person without wrestling and we’re like sure, okay, those sound like real feelings people could have. Nattie’s admission feels the closest to reality because it’s so goddamn believable.

When Charlotte first came up to the main roster and lost to Nattie, fans threw a total shit fit. People look at the match between Charlotte and Natalya on NXT as one of the key turning points in the “Revolution,” but the Raw rematch was a major stumbling block. It was one of many instances of WWE not giving talented women they wanted us to believe are talented the actual time to prove it. Instead of looking at it as the kid coming up, losing to the wily veteran Natalya on her home turf, and still having a lot to prove outside of the safe confines of Full Sail, Nattie got lumped into the role of everything wrong with WWE that the golden gals (no, not those ones) of the NXT Women’s Division were supposed to fix.

Back in September, Nattie gave her media-approved feelings on being left out of the Divas Revolution. During this episode, we find out this came after her emotional return to WWE during NXT TakeOver: Brooklyn, where she was set to make a real impact:

Bless this episode for bringing the ray of absolute sunshine that is Summer Rae back into my life. That girl is a real-life treasure, and her Total Divas cattiness towards Nattie makes me feel happy all over. I mean, just look at her and Emma pretend to care about Nattie’s feelings: 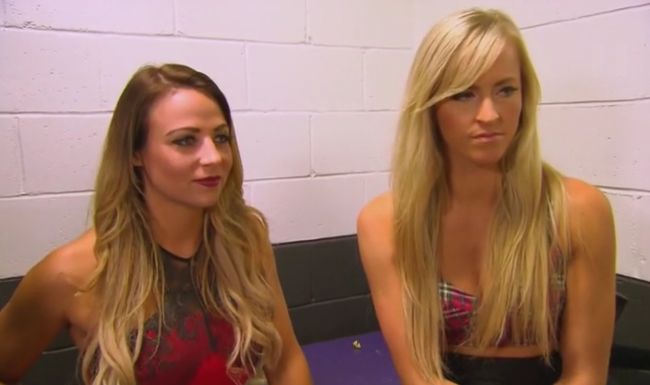 Anyways, where were we? Right. Pretending to care about Nattie’s feelings.

First of all, Summer Rae doesn’t have extensions. That hair is all hers. I can’t remember the birthdays of anyone I actually care about, but this is a fact that lives in my brain forever, I guess. Second, here we see all of Nattie’s fears coming true as she’s relegated to sitting in the audience (why would she be competing on an NXT special anyways?), but then doesn’t even get to do that. The resolution to Nattie crying a bunch is Summer Rae reassuring her that she still has a place in the company as they watch the Divas SummerSlam match from backstage. Summer tells her that when she was in Vancouver filming The Marine 4: Moving Target, she felt the exact same thing. But Nattie, she has nothing to worry about. The Hart theme is iconic, and to WWE she is women’s wrestling. I don’t think that last part is necessarily true, but it works, and Nat’s back to being confident and awkward as possible:

Summer Rae (a true American treasure) is right, but also inadvertently points out the sad reality for Nattie: the Harts are iconic. WWE will always have a place for Natalya, but because they need to always have a place for Natalya. WWE’s relationship with the Harts is, without overstating it, not great Bob. Without getting into that whole Uncle Owen thing, or even any of (her real dad) Bret’s stuff, Nattie herself has been consistently humiliated – be it the farting gimmick, being referred to as a literal freak, or, you know, [insert every past episode of Total Divas here]. She’ll always be around, whether they put the effort into making her relevant and an effective part of the show or not, and she’ll clearly put up with anything, so she really doesn’t have to worry about them ever forgetting her. Dang, Summer. Way to accidentally bring the heat.

And hey, at least they gave her an afternoon with a bunch of cats and a totally not-staged fan question about her status in the Divas Revolution, right? 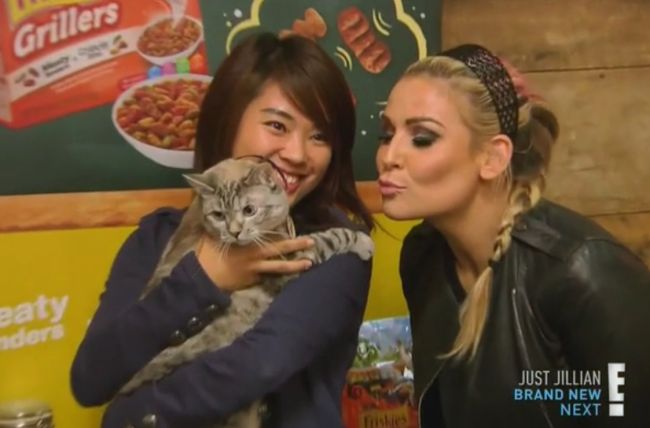 Once you embrace the totally not scripted scripted nature of Total Divas, the show is becomes this glorious, trashy bit of fun where beautiful people guzzle champagne and sometimes Cesaro is there. I mean, that’s basically the dream, right? This episode, however, makes it a little it harder to see past the contrived nature. To wit, the main conflict for eternal besties Alicia Fox and Paige was that Foxy unfollowed her porcelain other half on ‘all social medias.’

Ugh, I know.Here’s the situation in a nutshell: Paige wants to bring her bearded beauty artists because her hair requires two people and I’m pretty sure she only knows dudes with beards and Joey Ryan. Foxy tells her that…I dunno, someone extraneous and only relevant in this moment was unhappy with Paige bringing extras into the existing delicate make-up ecosystem, lest you sneeze and suddenly Becky Lynch is in blackface and the Miz has grown an extra toe. I don’t know, make-up and nature are both really complicated. Anyways, Paige decides to take this second-hand information that Foxy wasn’t even supposed to tell her and turn it into a thing, making Foxy think that she can’t trust Paige. As such, Foxy removes her from all of her ‘social medias.’ At SummerSlam, Foxy thinks that Paige sandbagged her during the match, but Paige claims she was just tired and didn’t communicate it. They both sit down in catering and agree that they both should have communicated better (or at all) and are still best friends.

That’s all well and good (it’s not), but what, oh what is going on with Nikki Bella?

Nikki and Very Famous Boyfriend John Cena celebrate their three-year anniversary on this episode. Nikki is still smarting from John not even being mildly fussed that her Less Famous Ex-Boyfriend Dolph Ziggler offered her a dream life and then tried to kiss her. John admits that he loves Nikki and can see spending the rest of his life with her (yay?) but he’s still adamant that he never wants children (oh, not yay). Nikki is thrilled, but torn between the love of her life, and giving up the chance to carry a baby around in a Birkin bag.

This is, of course, exacerbated by Dolph Ziggler showing up at the last minute to a promo event with a bunch of kids and being really, really charming and great with them. I mean, she even shot him one of these: 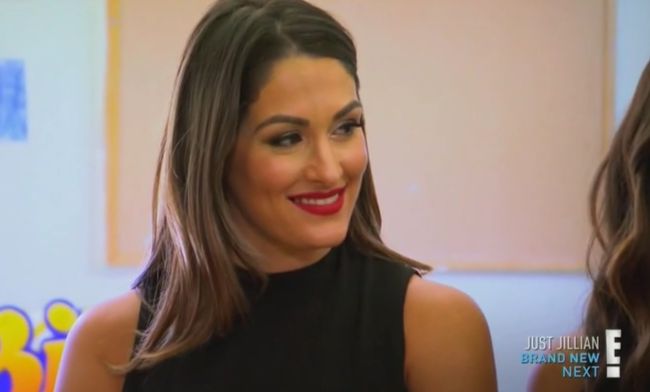 Now that’s a “I don’t want that to be my life but I’m imagining it right now and it’s pretty great OH NO” look if I’ve ever seen one. She even gives him the ol’ “I have no reason to be touching you but oops now I’m touching your arm and it feels really nice and in this moment everything is totally okay in the world OH NO”:

To make matters even worse, hey, you know who is shockingly wonderful around children?

This leads to not one but TWO separate eating scenarios wherein Nikki and Brie reiterate that Nikki has to choose between a rad dude she loves and loves her and potentially ‘having a kid who hates her.’ Does she want to live a life filled with ambitions and dreams and being a world-famous superstar with someone she’s in love with, or does she want to have babies? Does she want to sit on the sidelines, childless and rich, while Brie shoots out tiny Daniel Brie-ans like an AK-47? I mean, half of that sounds pretty baller to be honest. The best part, of course, is when Nattie tags along for one of them and they keep talking about it like she’s not even there: 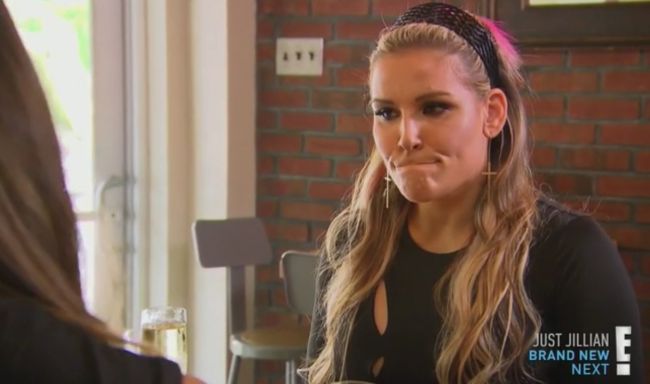 Next week Nikki gets sprayed with a water hose, so none of this will even matter, probably: 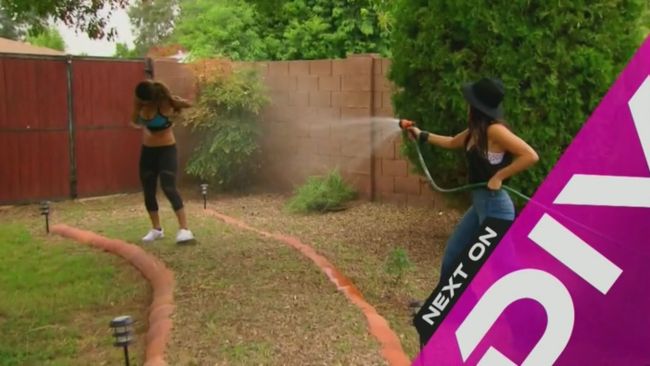 Eva Marie is here for like a second, wearing a baller David Bowie shirt and getting very confused about where she is: 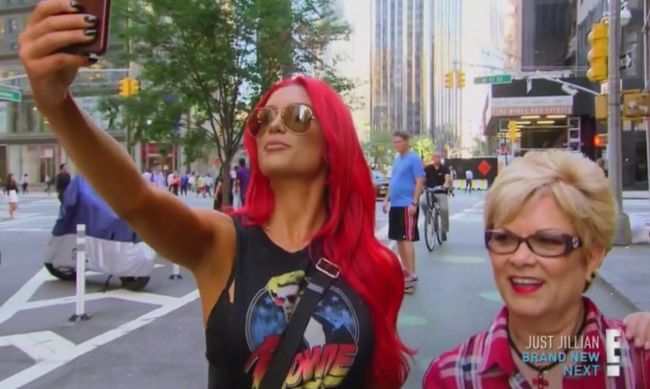 And now, my Top Five Out Of Context Screenshots, featuring things that just make me flat-out happy: 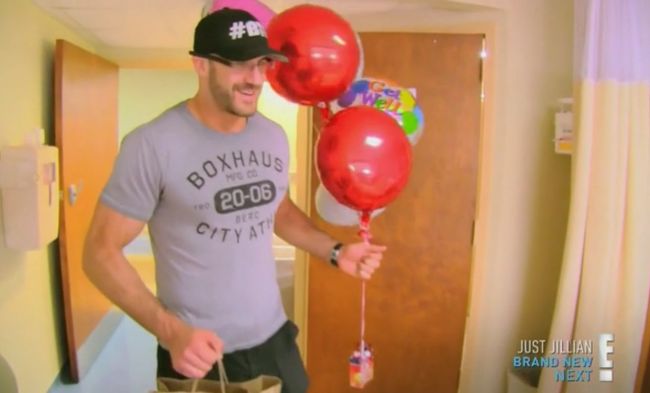 Oh my god Cesaro. The good news is he’ll be around next week, and so will we. See you then!