If WWE Is Ever Going To Bring Back The Brand Split, Now Is The Time

On the Raw after WrestleMania, WWE called up Enzo Amore, Colin Cassady, and Apollo Crews to the main roster from NXT. On Sunday, Baron Corbin got the call and won the Andre the Giant Memorial Battle Royal. The Vaudevillians are set to debut tonight on SmackDown, and Eva Marie and Emma got moved up right before WrestleMania to fill the spots in a ten-women tag team match. In addition, Cesaro and possibly John Cena made their return from injuries. All of that is to say that the roster has a boatload of people on it that weren’t around just a couple of weeks ago.

That leads me to think there is only one real conclusion to ensure that all of the new talent coming up (as well as the existing talent that risks getting lost in the shuffle) are properly utilized to the best of their abilities: bringing back the brand split.

The brand split was in place from 2002 until 2011, and while there were certainly some major problems with it, it did give more performers an opportunity to be in the spotlight. In addition, with SmackDown moving to the USA Network last year, WWE has been looking for there to be a reason that people tune into that show every week, and not being able to see half of the roster on Monday nights would be one way to guarantee that happens.

The company would likely have to bring back a secondary world championship, another set of tag belts, and probably even a second women’s championship if they were to once again make SmackDown their own brand, but everything else would appear to be in place for this to happen now.

If it doesn’t, there is inevitably going to be some talent (especially when everyone returns from injury) that get phased out of TV because there is just not enough time for everyone on Raw. By my count, there is currently 12 tag teams and stables on the main roster, as well as 12 female wrestlers. That is far too many to expect all of them to get the TV time that they should be getting.

Even with three hours of Raw every week, you’re probably going to have to watch SmackDown to see half of those performers anyways, so why not just make it official and make the Thursday show its own brand?

Yes, the number of pairings you could make for pay-per-views would be more limited, but the plus side would be that each brand would theoretically have more time to build for a show and not have to cram feuds into a three or four week span in between network specials.

Here is a quick idea of what a brand split could look like, and keep in mind that I spent like, five minutes putting this together. 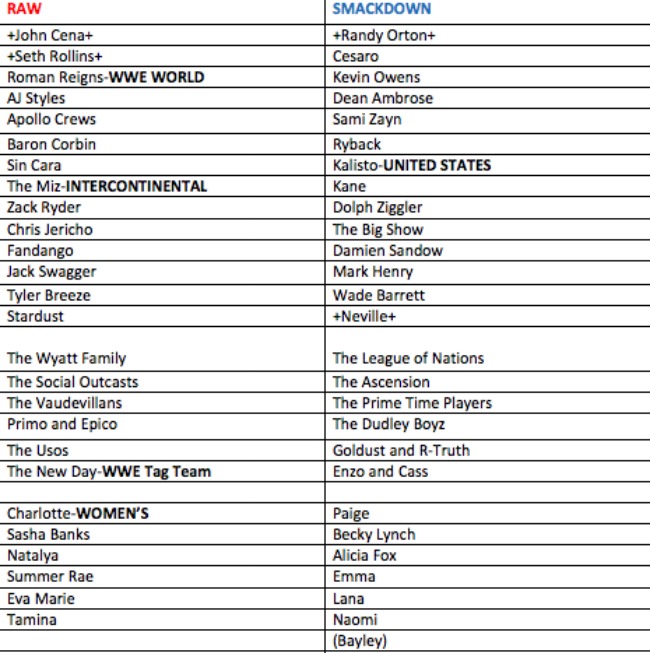 Move people around however you want, it’s only a first draft, but it gives an idea of what a potential split would look like. I didn’t even account for part-time performers like Brock Lesnar, The Undertaker, and Triple H, nor did I factor in future call-ups like Finn Balor, The Bullet Club or Samoa Joe (although I did throw Bayley in there).

The brand split is a risk, no doubt about it. There is a certain segment of the audience that will be missing out on some of your top talent because they are simply not willing to commit to five hours a week of WWE programming. However, in my estimation, it’s riskier to keep everything the way it is and have half of the roster miss out on the opportunity to build themselves up consistently on WWE programming.

What do you think? Should the brand split return? If it did, who would you put on each show? Let us know in our comments section below.