This hand gesture is officially too sweet for the likes of you.

Well, it’s official. WWE has reached that level of hubris where you start thinking you can claim ownership of specific hand configurations. Yes, WWE has apparently registered to trademark the old NWO/Kliq hang gesture. You know, the super cool one that makes your hand look like a little dog. This one… 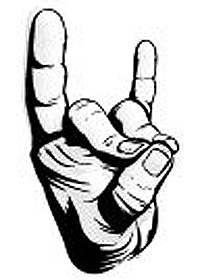 Of course, this can be seen as a shot across the bow of New Japan Pro Wrestling and their popular Bullet Club stable, an NWO-esque foreign invaders stable, who sometimes flash the hand gesture made famous by Nash, Hall and Hogan because I guess doggy fingers are cool no matter what side of the Pacific you’re on. Some Bullet Club members independently sell merchandise featuring the hand gesture.

Honestly, this all comes across as incredibly petty. The hand gesture hasn’t been featured on WWE programming in a serious way in years, and it’s not like the Young Bucks selling a shirt is going to cut into WWE’s profits.

I suppose there’s nothing to be done. From now on, play it safe, and make sure there aren’t any WWE lawyers hiding in the bushes before you do your NWO fingers. Maybe just stick to middle fingers and crotch chops if you want to be an obnoxious wrestling fan. Those are still safe (for now, at least).